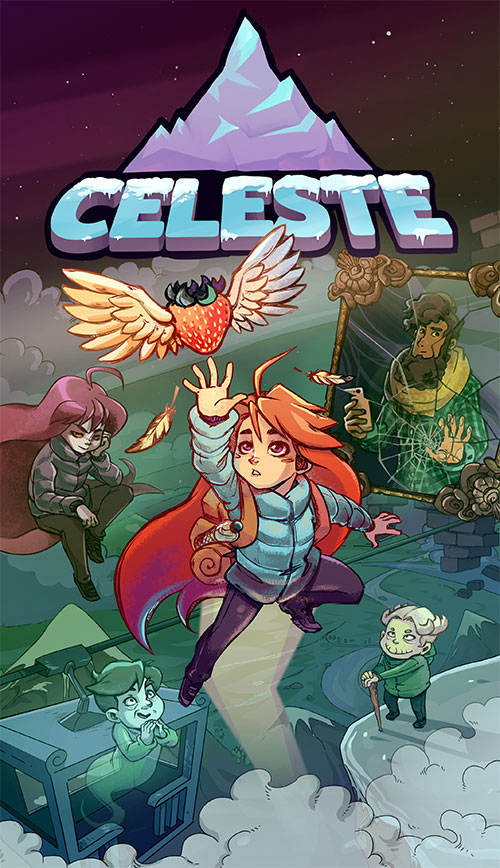 Celeste is a platformer with rudimentary graphics and gameplay mechanics that could technically have been made twenty, even thirty years ago.

But beneath the surface is a deep platforming game, which draws inspiration from the likes of Super Meat Boy and speed run videos on Youtube, and the narrative package surrounding the game is a surprisingly thoughtful story about a young woman named Madeline who wants to reach the summit of Celeste Mountain.

Lets start with the platforming.  Platform games are a tricky beast that can be the undoing of developers big and small.  A lot of the nuance around what makes a platformer feel right can be difficult to articulate.  If the jumping arc is too restrictive in the control it gives the player, then the game feels stiff or unresponsive.  Loosen the control over the jumping trajectory too much however and it feels unnaturally floaty.  When you nail the controls, the results can be a game with near timeless appeal (Super Mario Bros 3, Super Mario World).  Fudge the controls and it can become an albatross around your neck, as with Little Big Planet.

Matt Makes Games have got it pretty well spot on with Celeste.  The basic jumping arc that Madeline can do is short and simple, but gives just enough control to the player where they can adjust midair and course-correct to navigate many of the game’s trickier challenges.

Where it really starts to get good is the air dash.  Time it just right at the peak of Madeline’s jump and you can reach ledges that would otherwise seem out of reach.  Madeline also has a wall grab that only lasts a short period of time.  So once the game really gets going, not only does the player have to nail some inch-perfect jump/air dash combos, they must do so at pace.  And just as the player begins to master these challenges and gets accustomed to the level design, Matt Makes Games then sprinkles in some additional mechanics – sinking platforms, springs, mid-air crystals that reset the air-dash, gusts of wind that affect your momentum and more. 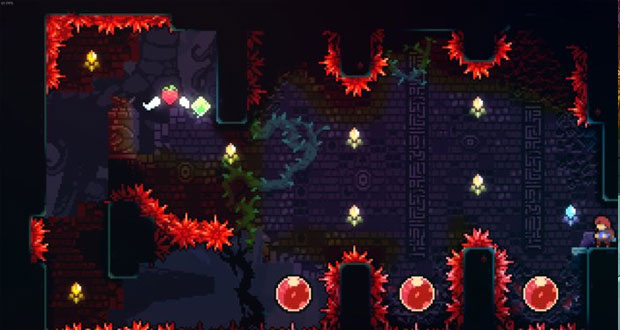 Each new mechanic that gets introduced provides a new wrinkle to the platforming challenge.  Then when the developer starts integrating them together to make some especially challenging levels, that’s when Celeste really begins to shine.  The game can be very hard, but it never feels unfair.  Mastering a sequence of jumps and airdashes to finally conquer a difficult level after a dozen deaths feels absolutely sublime.

Part of the recipe for getting this type of game right is the time it takes to reset when the player dies.  It’s maybe half a second with Celeste.  Whatever it is, it feels near instantaneous and that meant that despite my one thousand two hundred deaths in the seven hours it took me to complete Celeste, I never felt particularly frustrated.  I just wanted another go.

Honestly, if the game existed in a vacuum with no storyline or context, I think it is still an easy recommendation.  The level design is masterful and the learning curve is handled perfectly.  But Celeste is packaged up in a surprisingly clever and discerning narrative around a woman who suffers from panic attacks and anxiety who wants to overcome her inner demons.  The dialogue in Celeste is written in a contemporary style, with references to selfies and so on, but it never feels cutesy or cloying.  In fact, its just the opposite.  The easy-going narration feels authentic and sincere.

Video games can be many things.  They can be toys and they can aspire to be art.  To take a retro-styled platformer and wrap it around a storyline involving mental illness could have gone very poorly.  But I think Celeste’s careful handling of its subject matter earns the game the right to go down the paths that it does.  In fact, the way the game ties some of its narrative themes to its game design is particularly commendable, taking full advantage of the interactive nature of the medium.

Celeste may look slight at first glance but it quickly reveals itself to be a cleverly designed platform game with plenty of warmth and wit in its storytelling beats.  Don’t pass up the chance to give it a go.

Summary : An unassuming looking platform game that ends up being far greater than the sum of its parts. One of the best surprise packages of 2018.