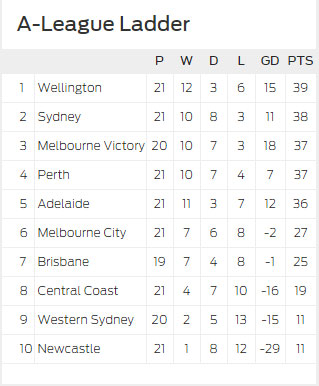 Brisbane Roar’s run of questionable form producing solid results finally ran out when they met a rampaging Sydney FC side that has been scoring goals for fun in recent weeks.  After taking an early 1-0 lead in the game thanks to Henrique, Brisbane succumbed to the next four goals with in-form marquee striker Marc Janko scoring a hattrick for Sydney and breaking two goal scoring records – the most goals scored in consecutive games (seven) and the most goals for Sydney FC in a single season (sixteen).

The game should have been well and truly beyond the reach of Brisbane but Brandon Borrello and Steve Lustica both made an immediate impact when they came on the field.  The game finished with a flurry of three goals in the final five minutes to finish 5-4.

After this result, I think a few things are clear to me about the current Roar squad.  Firstly, the much maligned Jamie Young has improved leaps and bounds in goal.  It might sound odd to say that in a game where we conceded five goals but he saved a couple of clear goal scoring opportunities and two of the goals came from penalties.  Secondly, Corey Brown seems to be getting worse by the week and is becoming a major defensive liability for the Roar.  We had the good fortune of Brown getting selected for the Young Socceroos which means he’ll miss three games but long term the club needs to look at finding a replacement.  Stefanutto is on his final legs and the promise that Brown had been showing up till now seems to have evaporated.  His positional play is poor and he is becoming increasingly dirty in his tactics.

Lastly, a shout out to Steve Lustica – a Brisbane Roar utility player that doesn’t get the plaudits he deserves.  One of the struggles we’ve had this season has been that the goals have dried up from our attacking midfielders with Broich, Petratos and Brattan either not scoring at all or being significantly down on their output from previous seasons.  Lustica gets precious little game time but he’s actually consistently been able to find the net in his time at the club.  Maybe its time we gave him more of a go.

Previous: John Wick
Next: The Revolution Will Not Be Televised