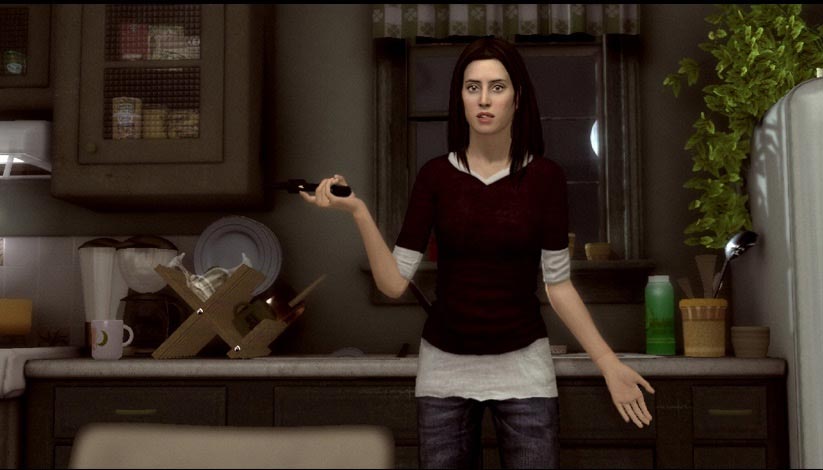 I‘ve just now finished playing through Quantic Dream’s ambitious ‘interactive drama’ Heavy Rain.  Here’s a plot synopsis as if it were a film:

Our story begins with a man named Ethan Mars, an architect who looks like Stephen Baldwin.  He has a loving wife and two kids.  One day, they go to the shopping mall and have the following exchange:

Unfortunately for Jason, he wanders into the path of oncoming traffic and is killed.  Ethan gets hit by a car in the process of trying to save his son and is put into a coma for six months.

When we are reintroduced to Ethan, we learn that he has pretty much gone off the rails.  His wife has left him and to make matters worse, he now randomly blacks out and manages to lose his other son at the park.  It appears to be the work of the Origami Killer, a serial killer in town who has a record of kidnapping young boys and killing them by drowning them in rain water.

Ethan is contacted by the Origami Killer and is instructed to follow a series of tests to see if he is worthy of recovering his son.  Ethan follows all the commands of the Origami Killer performing tasks such as driving the wrong way down a freeway, chopping off his finger, killing a drug dealer and drinking a glass of poison.  All in the name of saving his son.  Once he completes the last task, he is given the complete address to Shawn’s location and heads there.

Meanwhile, Scott Shelby, a big fat detective guy, and his hooker-cum-sidekick Lauren, hang out together investigating the case of the Origami Killer.  Scott is a real handy man.  He cooks good omlettes, saves people from commiting suicide and then minutes later, is busy changing diapers on babies.  What a guy.  He is eventually assaulted by a wealthy tycoon named Kramer who chucks him and Lauren into a lake.  He saves himself but Lauren drowns.  Scott then goes all Scarface on Kramer’s goons before letting old man Kramer die when he needs his heart medication.  It is then revealed that Scott is actually the Origami killer.  So why was he investigating the case if he is the killer himself?  Well, try not to think about that because otherwise the story doesn’t make any sense.

Meanwhile, Madison Paige is an erratic and at times inexplicable character who meets Ethan at a motel before becoming friends and eventually falling in love with him, despite his complete disinterest in her and his weird habits like driving the wrong way down a freeway.  She is just understanding like that.  I think she is on drugs or is just a real space cadet.  We are introduced to her when she dreams of going to the toilet and not wiping, having a shower and then getting attacked by two of the soldiers from Metal Gear Solid 4.  This dream is never really explained.  I think its just meant to show what an unstable lady Madison is.  Also a good excuse to show boobs.

Eventually Ethan confides to Madison that he just killed a man.  This doesn’t bother Madison at all since Ethan ‘isn’t the Origami killer’, so she has sex with him.

Meanwhile Jayden is an FBI agent who sucks at his detective work and is addicted to drugs.  He is assigned to the case to track down the Origami Killer.  In one scene, he chases a man in a red hoodie in what is the comedy highlight of the whole game.  The chase sequence goes for about 3 hours, including an altercation at a supermarket where he jumps over oranges, sidesteps some chickens and slides around the slippery floors like a contestant on Supermarket Sweep.  The only thing missing from this scene is someone getting pie-faced or the classic ‘window pane being carried by two carpenters’ routine.

Jayden is terrible at his job and can’t solve shit.  His incompetence culminates in a scene where, in front of the whole police force, he storms over to accuse his partner Blake of being the Origami Killer before realising he doesn’t have any evidence.  He then goes back to his office, which is actually a janitors closet (!), and starts sulking because he can’t solve the case.  He does have some sweet glasses though that let you access an operating system thats like the one in Minority Report.

Despite her weird taste in men, Madison is a way better detective than Shelby or Jayden.  She extracts some information out of a nightclub owner when she twists his scrotum using the R2 and triangle button to extract the information she needs.

She tracks down the Origami Killer’s mother who is in a hospital being treated for Alzheimers.  After making 57 different origami animals for this lady, it jogs her memory into telling Madison who the killer is.

Madison is a really ambitious journalist.  Not only is she not satisfied with solving murder mysteries that have spanned years, she has to actually go to the killer’s apartment and confront them so that she can sell more copies of her book.  She almost got a drill in her ladybits with the last killer that she confronted (on Wednesday that week) but unphased, she sets off to Shelby’s apartment to find a clue to Shawn Mars’ whereabouts instead of just getting some cops to do it.

Madison gets caught by Shelby who decides to set fire to his own apartment rather than just shoot her with the gun he has because….actually, I have no idea why.  Shelby just likes to make really arbitrary decisions like that.

Anyway, Madison escapes and calls Jayden to tell him where Shawn is being kept.

At this point, all four main characters (Jayden, Madison, Ethan and Scott) converge on the location of Shawn Mars.  Jayden, true to form, gets killed trying to apprehend Scott who casually swats him in the face with a mallet and escapes.

Ethan rescues his son and then is saved from being shot by the cops when Madison drives in on her bike and explains the situation to everyone.  Jayden’s partner, Detective Blake, is somewhat disappointed since he likes to shoot random civilians believing them to be the Origami Killer.

In closing, Madison finally gets her awesome book deal, Ethan must have sued the shit out of the cops for being wrongfully accused because he now has a huge new apartment and Shelby escapes punishment for the crime thanks to Jayden being a completely useless drug-addled idiot.

And there we are.

Clearly, there are some teething issues with creator David Cage’s interactive drama genre.  This isn’t exactly his Gone With The Wind.  The problems here are many.  He can’t write a convincing part for a female character to save his life and he seems to have a recurring theme of treating women as sex objects, not to mention his rather dubious treatment of minorities who are almost exclusively ill-educated and crude stereotypes (shopkeeper, pimp, petty criminal).

There are moments of individual brilliance however that make Heavy Rain a game worthy of recommendation.  You can see the blueprints for something great here.  It just needs a better script and a bit of fine tuning.  I’m a believer in the game of this length being able to sustain a QTE control system (press the buttons that appear on the screen and a context-sensitive action occurs).

It starts off a bit hammy with the game asking you to shake the controller from side to side to ‘mimick’ the motion of teeth being brushed and yet the scenes where you sever your own finger or when you perform CPR are greatly enhanced by the clever use of button mapping.  By doing a solid job emulating the character actions, it really lifts your emotional investment in whats happening.

Another gripe I have with the game is that almost all of the action sequences seem to run about a minute too long.  Not unlike a bloated Hollywood action movie, someone needs to take an editor to this and trim out some of the fat.  Some of the scenes initially start off with an intensity that gradually peters out and then eventually veers into parody.

David Cage is to be applauded for trying something different and even though this game is really clunky, I buy into the wider picture of what this game could accomplish.  Although Cage has wisely avoided the godawful supernatural elements of his previous effort Fahrenheit, what I would like to see is someone who is a better writer than Cage, take this game engine and apply it to an entirely different cinematic genre.  Make a romantic comedy with it.  Try your hand at a odd couple buddy game.  Or a Judd Apatow style Coming Of Age story.  If Cage has a third go at this gig, I’d be disappointed if he decides to try another psychological thriller.

Why does it always rain on Ethan?

Summary : Like Peter Molyneux before him, David Cage's ambitions continue to exceed his ability to execute. Heavy Rain is great concept and delivered with mixed results.

Previous: Catching up on things
Next: Week of Dawkins and Socceroos