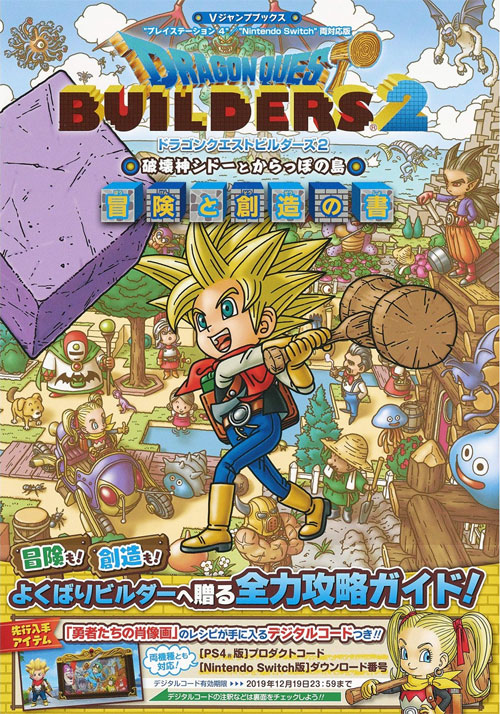 Dragon Quest Builders 2 is the game for anyone who has had their curiosity piqued by Minecraft but decided that an open-world sandbox game where you can literally build anything with no guidance or instructions is a tad too daunting to dip your toe into.

DQB2 offers players a more guided experience and hands them the equivalent of a Lego building manual, to help you build your very own village with cottages, kitchens, temples, saunas, pubs and more.

You take the role of Hero, a blank-slate male or female protagonist who escapes captivity from pirates only to be washed ashore on the Isle of Awakening, a blocky island where the inhabitants are oddly hostile towards anyone who has a propensity for building.  It’s up to you, the player, to win them over by defeating monsters, growing crops and building a village for your newfound neighbours to inhabit. 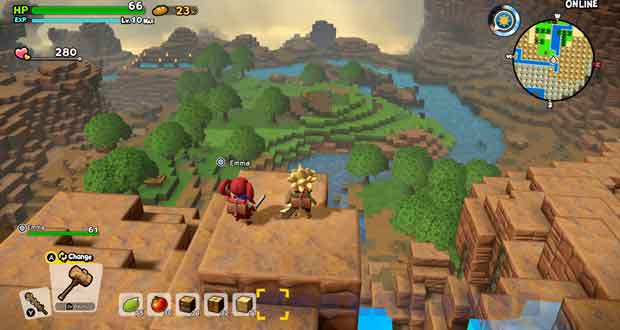 This is a game that cobbles together the mechanics of Minecraft (block building), Stardew Valley (farming), Pokemon (monster hunting/collecting) and of course Dragon Quest (narrative).  If that seems like a lot to process on paper, its just as much to absorb when you’re actually playing it.

The first 15-20 hours of the game is where the game shines the brightest.  The Dragon Quest aesthetic actually compliments the Minecraft geometry well and the writing is full of charm, loaded with puns and silly one liners that sort of reminded me of the Asterix comic strips.  Seriously, there are a lot of puns.  I hope you like puns if you’re playing this.

The game is divided into chapters, each with its own self contained storyline, seperate to an overarching narrative about some Big Bad and how you’re the descendant of a lineage of heroes destined to save the world from them (that old chestnut).

When you pull the individual mechanics of the game apart, I think it actually does each of them rather well.  The block building at the heart of the game works exactly as you’d expect and want it to.  The instructions are helpful in guiding your creation but the game still affords you enough room for creativity to put your own personalised touch on your buildings.

Building your village is a pleasant and relaxing way to pass time and it is made all the more enjoyable by the cute and expressive little farmers who inhabit your town and have charming animations for eating, sleeping and goofing around.  The farmers are an animated bunch and are given loads of funny lines of flavour text, expressing their approval when they have a feast etc and their disapproval when the village no longer has all the facilities they need.  They are very community minded and do everything together – right down to when you build your first toilet and everyone gathers around to watch the first guy poop on it (seriously).

The combat and exploration in the game is simple but serviceable.  It helps that this is a Dragon Quest game so there is a massive back-catalogue of smiley, cheerful Akira Toriyama designed creatures to cross swords with.  The farming is also decent with a large variety of crops to grow, some of which have special requirements with watering or terrain to nurture properly.

All of this comes together just so for a rosy introduction to the game.

I think where most people start to hit a wall is around Chapter 3 (20 hours into the game).  Although the individual elements of DQB2 are fine, I think Square Enix begin to struggle with what it prioritizes and asks the player to spend their time on.  By this stage, I think a lot of the dialogue in the game begins to wear out its welcome.  The characters talk endlessly and often without providing any meaningful information to the player.  I believe most people want to spend the majority of the game tending to their village, building new houses and growing their crops.  But by this stage you will have annoying, near constant attacks from random monsters that tear down your buildings.  Its frustrating and an unwelcome step away from the peaceful, serene gameplay of the first ten hours.  Lastly, the storyline drags on and on and heads into some pretty unsavoury, sexist territory in the chapter centered around the building of a pub.  I think the game actually gets worse, the longer the story goes and more monster fighting mechanics are applied to the core gameplay.

Still, I enjoyed a lot of what Dragon Quest Builders 2 had to offer.  And although I didn’t play it, I’m told the game is a marked improvement on the original.  I feel like it might be one iteration away from getting the formula exactly right.  There’s a very fun game at the heart of DQB2, but too often it gets in the way with rambling dialogue or a repetitive fight with a monster horde.  If Square Enix listens to feedback and makes the necessary adjustments, I think Dragon Quest Builders 3 could be very special.

An action RPG that brings together the world of Dragon Quest and the block building of Minecraft.

Summary : A fun, block-building RPG that isn't without a few niggly flaws.

Previous: Crawl
Next: Once Upon A Time In Hollywood