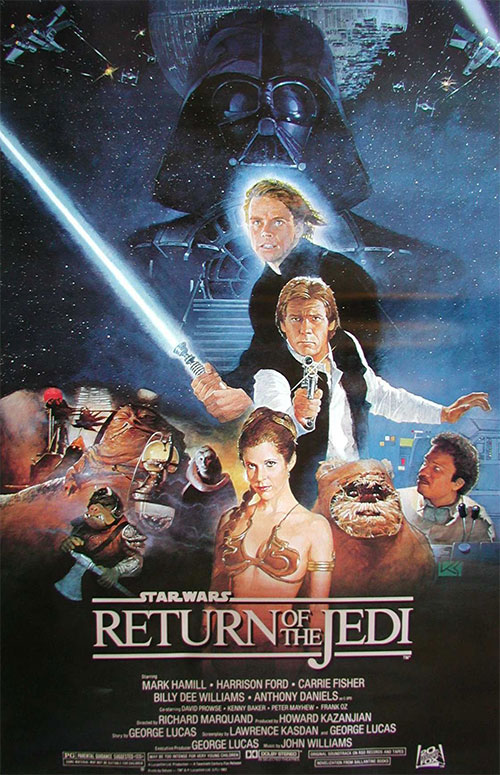 The closing chapter of the original Star Wars trilogy saw George Lucas and his creative team firing on all cylinders.  The Star Wars universe and its cast of characters had become well established, the films had found a huge worldwide audience and after making the first film at a fraction of the budget, The Return of the Jedi was put together with no expense spared and designed by a sure-footed team of effects experts who had well and truly honed their craft with the first two films.  The end result was the most expansive and spectacular film in the series to date.

The film begins with the rescue of Han Solo, frozen in carbonite and in possession of the crime lord Jabba the Hutt.  This sequence introduces us to the newly focused Luke Skywalker, almost zen-like now in his demeanour, such is his mastery of the Force.  He makes short work of the nefarious Jabba.

After Luke successfully reunites with his friends, the stage is set for a final showdown with Darth Vader and the Emperor.  Return of the Jedi somehow manages to up the stakes on Empire by casting the heroes into a battle across many fronts.  The Rebels form an alliance with the Ewoks and wage war with the Empire on planet Endor.  An enourmous space battle takes place in the orbit of a second Death Star that is being constructed by the Empire.  And amongst it all, Luke Skywalker fulfils his destiny and approaches Darth Vader one last time, understanding that killing his father would effectively mean surrendering himself to the Dark Side.

George Lucas’ vision for Star Wars has forever been a delicate balancing act between his great ideas and his lousy ones; between his creative vision and his commercial ambition.  The first two Star Wars films were huge box office successes where the appeal of the characters onscreen translated into a gold mine of merchandising money.

Return of the Jedi is the film where the scales tipped in the other direction and Ewoks were conceived as a toy that appeals to children first, then shoehorned into the film second.  Seeing Storm Troopers getting bested by an army of cuddly forest critters might have been a surprisingly shift in tone for audiences after The Empire Strikes Back but the overall direction of the film – Luke fulfilling his destiny, Anakin finding his redemption and the fall of the Empire – was still immensely satisfying to watch unfold. 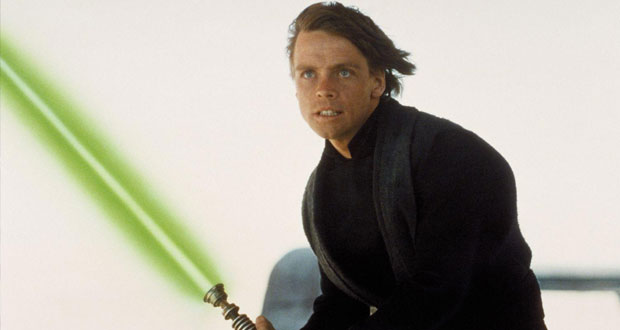 Return of the Jedi is the most predictable instalment of the originally trilogy but it does exactly what it should.  We want to see Han and Leia finally together.  We want to see Luke Skywalker overcome Darth Vader.  We want the Rebels to defeat the Empire.  It’s interesting to read that during pre-production, some radical ideas were tossed around including the demise of Han Solo and the choice of esoteric directors David Lynch and David Cronenberg were apparently considered.  Ultimately, I think the ‘safer’ choice was the right one.

Return of the Jedi is a supremely self-assured final act that is loaded with delightful touches and moments of levity that bring the film to life.  When Luke Skywalker – trapped in the pits of Jabba’s lair – defeats a monstrous creature that is all teeth and drool, the creature’s caretaker mournfully weeps in the background.  The anxiety riddled C3PO, forever badgered and hassled in the previous films, finally has a moment to shine when the Ewoks on Endor accept him as a shiny golden deity.  The beauty of Return of the Jedi is that the characters are now so well established that Lucas and the screenwriters can have fun playing with audience expectations and subverting them.

For thirty years, this has been the closing chapter to a thrilling saga.  The final farewell to a cast of beloved characters whose journey we have followed across three action packed films.  And now here we are, on the eve of a new seventh chapter.  Trailers have given us tantalizing glimpses of a new cast of characters as well as the welcome return of Leia, Han and Chewie.  Older, wiser, greyer but still the characters we know and love.  But what of Luke who has remained unseen so far?  What happened to the Jedi master after the fall of the Empire.  Did he slip into isolation as Yoda before him?  Has he crossed over to the Dark Side?  We don’t have long to find out.  I cannot wait.

After rescuing Han Solo from the palace of Jabba the Hutt, the rebels attempt to destroy the second Death Star, while Luke struggles to make Vader return from the dark side of the Force.

Summary : A fitting conclusion to the original trilogy. Luke's ascension, Vader's redemption and a happy ending for all. Perfect.

Previous: The Silkworm by Robert Galbraith
Next: Star Wars Episode V – The Empire Strikes Back [1980]