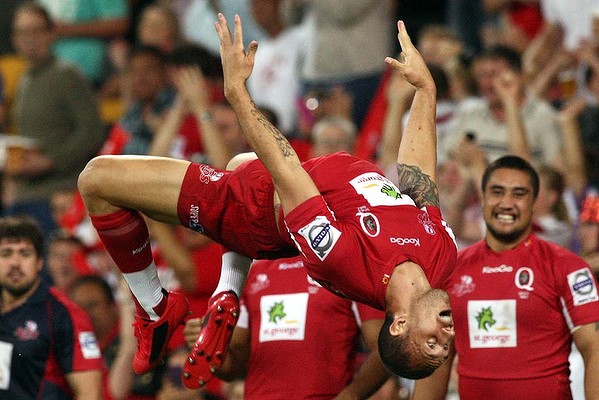 Round 10 of the Super 15 saw the Queensland Reds host old rivals NSW Warratahs at home.  Don’t ask me how the fixtures work in this competition.  This is the second time the Reds played the Tahs in the space of six weeks but they have yet to play against a single team from New Zealand?

The Warratahs have always had a stranglehold over their northern rivals, having beaten the Reds in every encounter for the last seven years.  How would the Reds fare in this latest test to prove they are serious contenders for the Super 15 title?

The focal point for the Reds once again was Quade Cooper who continues to play some of the best running rugby of his career.  A solo effort from Cooper late in the first half ended up producing the game’s only try.  He punctuated this effort emphatically with a sommersault backflip, besting Digby Ioane’s spin-a-roonie from last week.

It wasn’t a perfect report card for Cooper though, not by a long shot.  Over the course of the game he managed to kick the ball in to touch on the full five times.  These kicking errors effectively pinned the Reds back in their own half for almost the entirety of the second half as NSW ace Kurtley Beale kept kicking penalties to keep the Warratahs in the game.  Inside the last ten minutes of the game, the Reds lead by a single point.  In the end, the Reds defence held firm and they came away with the all important win.  As for Cooper, there’s no question he can bring the razzle dazzle, score tries and do amazing cut out passes but his weakness in some of the fundamentals of the game suggest that he might be the Super 15’s version of Shaquille O’Neal.  Time will tell.

The Reds remain top of the table and next week they finally play their first encounter with a New Zealand side – a road game against the Hurricanes.

As a stark reminder of just how absolutely TERRIBLE the Reds had been in the past few years and just how much coach Ewen McKenzie has turned around this side, the Courier Mail reported that the win over the Warratahs represented an interesting milestone.  In two years, Ewen McKenzie has now won more games than the previous three coaches over five years.  There was that one year with Eddie Jones in 2007 where we won two friggin’ games all season.  Two!  What a difference a good coach can make.

Will the Reds superb backline play remain effective against New Zealand teams?  Will Cooper improve on his kicking?  We only have a few days left to find out. 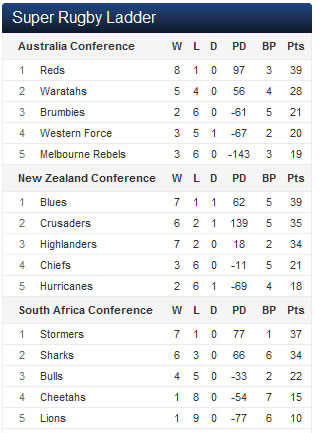