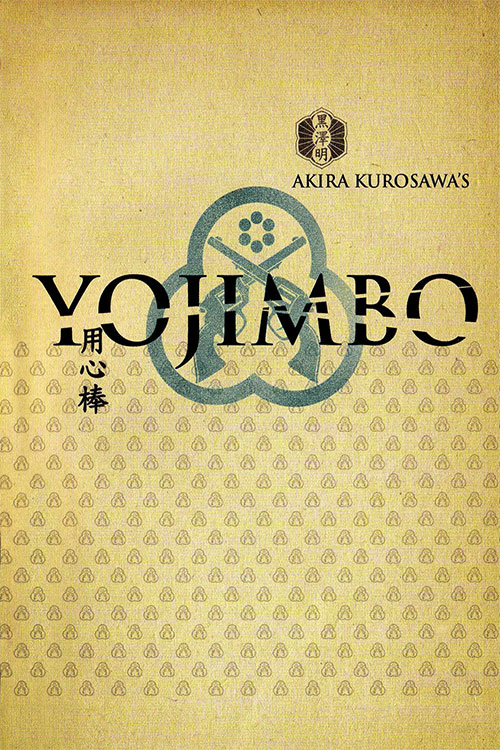 After the collapse of the Tokugawa dynasty, samurai found themselves without work and roaming the countryside in search of employment.  At the start of Yojimbo, we are introduced to one such ronin (a masterless samurai).  This stranger tosses a stick in the air and travels in the direction that it lands.  He arrives at a small village.  No one is there to greet him.  All the windows are boarded up.  A stray dog saunters by with a severed hand in its mouth.

The stranger visits Gonji, an innkeeper at a local izakaya.  Gonji explains to him that the town has been overrun by two rival clans lead by Seibei and Ushitori.  Both men prop themselves up with mercenaries for hire (who are mostly cowardly and terrible with the sword).  Seibei gets his money from the silk trade.  Ushitori funds his criminal empire with his sake brewery.  The stranger senses an opportunity to make some coin and rid the village of these vagrants.

And so begins Yojimbo, Akira Kurosawa’s most successful film in Japan and one of his most influential works outside of it.  Yojimbo represents an incredible cultural exchange between two generations of film makers in the East and the West.  Kurosawa was inspired by John Ford Westerns which is plain to see in the shots of mercenaries standing across from one another in a wind swept street, hands hovering over their holsters.  Whether the mercenary draws a six shooter or a samurai sword, the style is the same.

Yojimbo would then go on to influence Sergio Leone and his trilogy of Westerns with Clint Eastwood, most notably A Fistful of Dollars [1964].  Not only do they share similar narratives, even Eastwood’s Man With No Name appears to be directly inspired by Yojimbo.  When Toshiro Mifune’s samurai arrives in the town, he is asked what his name is.  He stares out the window and sees a mulberry field.  “Kuwabatake Sanjuro” he says, which means 30 year old mulberry field. 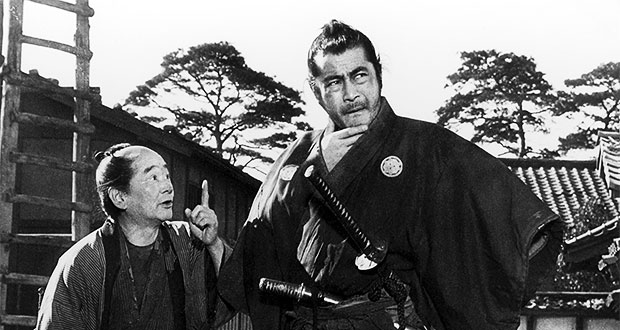 For a film that is over fifty years old and set in feudal Japan, I was struck by how sharp the dialogue is in Yojimbo and how downright grungy the whole affair is.  Although we certainly root for Sanjuro to ‘save’ the village, it becomes apparent from the outset that he isn’t exactly the most altruistic saviour that the town could have hoped for.  Although talented with the sword, he is also after money and if he can get his way by playing one side against the other and doing less physical work then he’s not above doing exactly that.  As for the townsfolk themselves, they are also largely interested in self preservation and don’t really have any sense of community.  Most memorably there is a casket maker who delights in hearing about any killings as it means extra business.  Only at the end when there is an enourmous bloody showdown between the gangs does he despair that there is ‘no one left to pay for the coffins’.

And perhaps that is the secret to Yojimbo‘s enduring appeal.  It stars an iconic anti-hero, is brimming with quick witted banter and has a cast populated with crooks, mob bosses, gunslingers, wrestlers and geisha girls.  When you think of samurai, generally one thinks of characteristics such as nobility, honour and sacrifice.  Yojimbo is probably one of the best samurai films I’ve ever seen and yet it is rooted in money, power and doublespeak.

At the centre of Yojimbo is Mifune’s performance as Sanjuro.  He is full of swagger and bravado, is handy with a sword, but he is not invincible.  Not least because one of the gang members, Unosuke, introduces a game-changing modern weapon into the equation – a pistol.  So for Sanjuro to made good on his promise to rid the village of the two gangs, he must rely on his guile instead of his sword.  Mifune’s performance – fast talking, wise cracking and droll – reminded me of the very best anti-heroes in modern cinema.  Mifune made his name with his performance in Seven Samurai and in Yojimbo he cemented his leading man status.

Mifune’s larger than life performance is ably captured by Kurosawa in a distinctive visual style that captures each scene at right angles so that everything appears to take place either facing the screen directly, or side on like a comic book panel.  In contemporary films, I’ve noticed Wes Anderson has taken to using this style most notably in Moonrise Kingdom and The Grand Budapest Hotel.  In Yojimbo, it makes the confrontations between the gangs and Sanjuro look especially captivating and evocative of shoot outs in Westerns.

Kurosawa also incorporates the use of ‘deep focus’ with his camera lens which allows the audience to view people and objects that are both in the foreground and background in sharp focus simultaneously.  Yojimbo is filled with moments where characters spy upon one another and make their move based on the outcome of conflict taking place on the other side of the village.   Kurosawa is often able to capture these action sequences and the reaction of the characters watching on at a distance all in a single shot.  Kurosawa is a fine story teller, not just in the tales he spun but how he captured them on the screen.  This is a film that is extremely easy on the eyes.

Yojimbo is a samurai classic with broad appeal.  It offers thrilling action, charismatic performances and a sharp sense of wit.  Not unlike Seven Samurai before it, it is also a reflective film that ponders the virtues of traditional Japanese customs and where they fit in modern society.  The film’s title ‘yojimbo’ is the Japanese word for bodyguard.  This is the role that samurai were expected to fulfil with loyalty and a sense of duty.  Sanjuro plays upon the expectations of this tradition to outwit his enemies.  But has he betrayed his own moral code?  What place does he have in a country that has no work for samurai anymore?  Kurosawa asked some interesting questions of his audience in the new era of Japan that rose out of the ashes of the second World War.

A crafty ronin comes to a town divided by two criminal gangs and decides to play them against each other to free the town.

Summary : One of the greatest and most influential samurai films of all time. 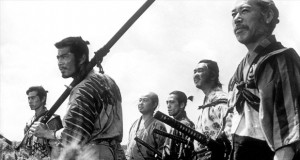