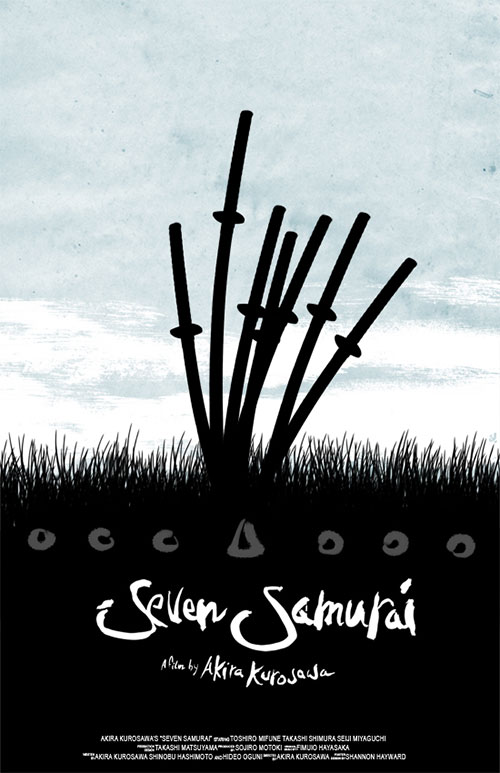 It is the 1600s and a time of civil unrest in Japan.  Bandits gather at the fringes of a mountain village, preparing to plunder it.  Their leader – realizing the village has already been cleaned out of all their food – calls off the attack until after the harvest.  A farmer overhears this exchange and warns the others.

Starving and utterly despondent, the villagers despair at the guillotine hanging over their heads.  One of the elders named Gisaku suggests that they recruit samurai to help them.  “But we have nothing to offer them!” one of the farmers cries out.  “Then find hungry samurai.  Even bears come down from the mountains when they are hungry.”

And so the stage is set for one of Akira Kurosawa’s most influential and beloved films.  Seven Samurai is a grand old 210 minute epic whose influence is far reaching and undeniable.  It is believed to be one of the earliest examples of a film in which a team is assembled to carry out a mission, establishing the formula for countless heist, caper and war films that followed.  It has been remade many times over (most famously as The Magnificent Seven) and is cited as an influence for directors such as George Lucas, Steven Spielberg and Sergio Leone.

As the late great film critic Roger Ebert observed “it could be argued that this greatest of filmmakers gave employment to action heroes for the next 50 years.”

Despite its formidable running time, Seven Samurai is a surprisingly easy watch.  The plot has a simple and clearly stated objective – the samurai must defend the village from the bandits – and the pacing and narrative structure of the film will be instantly familiar to modern audiences who grew up on Lord of the Rings and Star Wars.

The leader of the samurai is Kambei, a calm and self-assured hero with a shaved head who makes his introduction in the film by coolly walking into a hostage situation and rescuing a child from a thief.  Does this type of scene not sound instantly familiar as a modern day action movie trope?  Kambei’s effortless dismantling of the thief instantly wins him the adulation of the villagers looking for help.  Here is the man to save them from the bandits.

Kambei assembles a team of seven comprised of both old friends and new allies.  All six of his recruits are given distinctive personalities but it is Kikuchiyo and Katsuhiro who are given the most interesting and significant subplots. 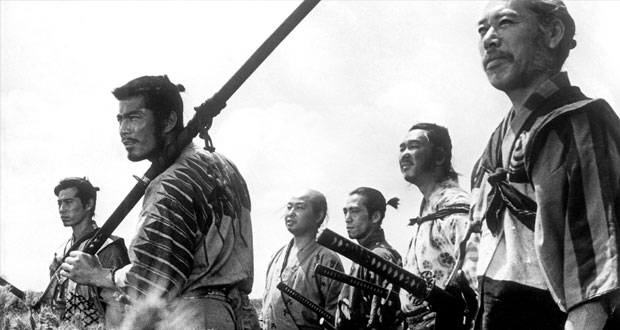 Kikuchiyo is played by Toshihiro Mifune in what would be a star-making performance for the actor.  He takes on the role of a hot headed and impulsive outsider who is only allowed to join the samurais ranks after dogged persistence.  The reasons for his rash behaviour and emotional connection to the villagers is revealed in the third act when we learn that he is the orphaned son of farmers.  Seven Samurai makes many observations about the caste system in feudal Japan – the villagers simultaneously rely on the samurai but also fear and loathe them.  Kikuchiyo is the poor fool trying to transition from one rank to the other and as such, he is an outsider to all.

Katsuhiro, the youngest of the seven, joins the samurai as Kambei’s apprentice.  As with Kikuchiyo, he bears the brunt of the cultural divide that exists between the villagers and the samurai as he falls in love with Shino – a farmers daughter.  Theirs is a forbidden love that the villagers cannot come to terms with.  Interestingly, their relationship isn’t really presented with a definitive resolution.  Akira Kurosawa was a world renowned director who was more celebrated overseas than he was in his homeland where critics sniffed that his works were ‘too Western’.  Viewed through the lens of a Western audience, Katsuhiro and Shino’s relationship has a natural outcome.  Japanese audiences may well have argued otherwise.  Leaving the status of their relationship open ended doesn’t really end up placating either.

Seven Samurai is a film that has the air of a Shakespearean tragedy about it.  From the outset, it is plainly stated that the samurai are committing to a thankless task.  They face challenging odds defending a village of farmers who don’t like them all for the reward of a few meagre handfuls of rice.  The character arcs established early on set the expectation that not everyone will survive the bandit raid.

The samurai’s masochistic adherence to a societal expectation may seem quintessentially Japanese on paper but Kurosawa is able to translate their behaviour into an act of magnanimous nobility that is crucial to the films international appeal and influence.  I think it is Kambei’s easy going nature and the sense of comradery that he instils in his team that is key to making this work. 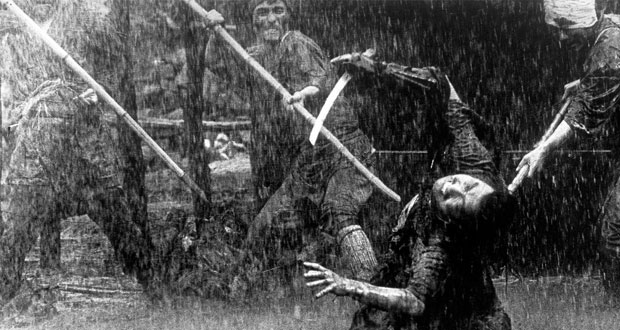 A few words on the signature battle itself.

One thing I liked about it is that it is presented with a great sense of precision so the audience knows exactly whats going on.  There isn’t ‘a lot’ of bandits attacking the village, there is exactly forty.  The seven samurai aren’t arbitrarily covering a perimeter, they are posted in the north, east and west with the flanks covered by a river which they deliberately flood so it can be used as a defensive moat.  As the conflict unfolds with wave after wave of attacks from the bandits, we see Kambei in the centre of the village receiving reports from his scouts, marking x’s for each enemy slain.  This exacting approach is perfectly in keeping with both Kambei’s persona as well as the meticulous and finely observed craftsmanship of Kurosawa’s film making.

I’ve mentioned that Seven Samurai is a film with many modern cinematic sensibilities.  Perhaps one of my favourite moments of the film involves a scene where the samurai are pinned back by the bandits who we learn have three matchlock firearms.  The mighty swordsman Kyuzo volunteers himself to defuse the situation and disappears into the fog of night, heading towards the bandits.  The next morning he returns, enemy rifle in hand.  “I killed two” he explains casually and then closes his eyes for a powernap.  Who knows – maybe the decision to have that moment occur off-screen could have been a cost-cutting measure – but having Kyuzo vanquish his armed opponents sight unseen and be so blasé about it upon his return was hilarious to me and felt very much like a gag from a contemporary film.

Visually, its astonishing how well the battle scenes hold up.  I don’t really have the words or the expertise to adequately articulate just how well Kurosawa constructs these scenes.  All I know is that moment to moment – the stampede of riders on horseback, the clash of swords between samurai and bandit, and lingering shots such as that of Kambai stoically drawing his bow in a torrential downpour – all feel as tightly edited and immersive as any modern day blockbuster.  The conflict is an emphatic exclamation point to a classic film.  Heroes stand up, sacrifices are made and the day is won. 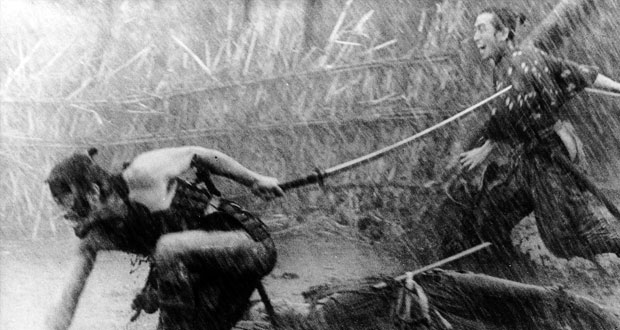 Seven Samurai closes with a sombre, self-reflective gaze.  The bandits are slain and the village is saved.  After the battle, the villagers sing and tend to their crops and very quickly the samurai lose their purpose and have no place amongst the farmers.  Four burial plots mark the fallen samurai.  Katsuhiro’s romance with Shino remains unfulfilled.  Kambei quietly observes that the samurai have gained nothing from their victory and that only the farmers are the true victors.  Referring back to Roger Ebert’s wonderful critique of the film, he explains that the ending of Seven Samurai marks a turning point in Kurosawa’s works.

“Seven Samurai represents a great divide in his work.  Most of his earlier films subscribe to Japanese virtues of teamwork, fitting in and going along.  All his later films are about misfits, nonconformists and rebels.”

As someone still very new to Kurosawa’s body of work (his only other film I’ve seen is Rashomon), I look forward to watching his other signature films – Ikiru, Hidden Fortress, Ran – and watching the transformation for myself.

A poor village under attack by bandits recruits seven wandering samurai to help them defend themselves.

Summary : A timeless classic. A 210 minute samurai epic that inspired and influenced future generations of films. 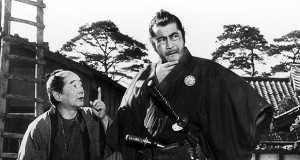