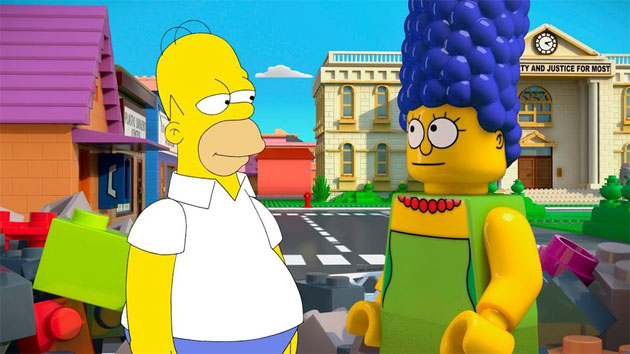 Like everyone else, I stopped watching The Simpsons a long time ago.  Well, I come back for the ‘special occasion’ episodes.  The one starring Ricky Gervais.  The 500th episode.  The one where they kill off a major character (I can’t even remember who it was in the end).  Oh, and the movie.

The latest gimmick episode to lure me back is the 550th episode – Brick Like Me – a Lego themed episode.  In it, Homer begins playing Lego with Lisa which to his surprise, is not completely awful compared to other children’s entertainment that he has to pretend to enjoy.  Invigorated by this new mutual love of Lego building, Homer suddenly finds himself with a great appreciation for playtime with his daughter (“I can’t believe I wasted all that time playing with Bart!”).  Things come undone when the upcoming Lego Building contest in Springfield falls on the same day as the release of the new The Survival Games movie which leads to Lisa ditching Homer so she can hang out with the cool kids from the year above her.  Homer goes to the Lego Building contest alone and gets struck on the head by a falling Lego statue which sends him into an imaginary Lego Simpsons world where nothing ages and he can play with Lisa forever.

I’m surprised to say that I really enjoyed this episode.  Even over and above the Lego references which were plentiful and much appreciated.  The episode incorporates a lot of sharp witted satire about sex, religion and popular culture (in this case, The Hunger Games) which reminded me of The Good Old Days of The Simpsons.  In fact, I think one of the biggest things that changed with The Simpsons that drove me away all those years ago was that Homer went from being a well intentioned doofus to someone who was willfully stupid and ignorant.  In this episode, there’s actually a semblance of a relationship with his wife and daughter and thats where the show gets a lot more mileage with scenes that explore marriage and parenting, instead of just pursuing cheap non-sequitur gags.

The Lego jokes in Brick Like Me were excellent too.  I was pleased to see the term AFOG referenced and there were one liners about decal stickers (a hotly debated topic amongst Lego fans), that orange brick separator thing made an appearance in church and I liked how anything liquid was represented by those transparent single Lego tiles.  The episode also made me hope that Lego was only just getting started with their Simpsons Lego range.  The Simpsons house is good and all but who wouldn’t want to see them release a Kwik-E-Mart or Moe’s Tavern?

If you like Lego, you should track down this episode without hesitation.  And if the quality of this episode is any kind of barometer, maybe the show hasn’t been as bad as I thought it had been in the last few years.

Tagged with: Lego The Simpsons