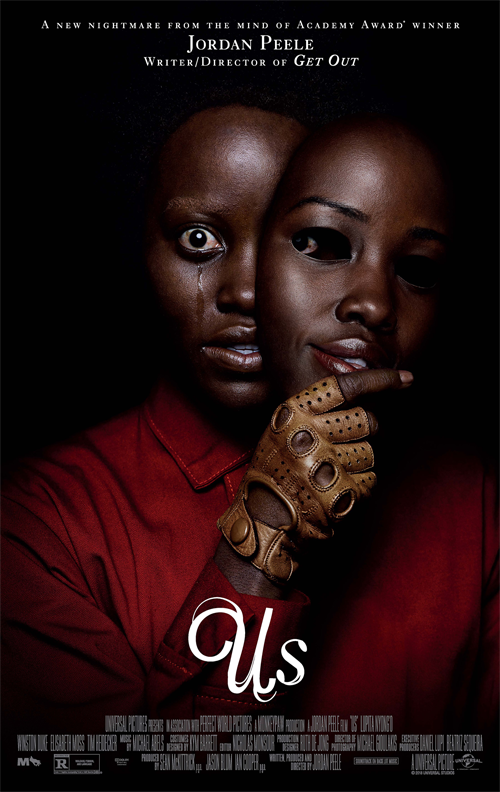 It’s quite extraordinary that in the space of three short years, Jordan Peele has transformed himself from being one half of a Comedy Central sketch show duo to becoming the pre-eminent horror genre director of his time.

Peele’s Us stands alone in the box office top ten of 2019 as the only non-remake, non-super hero film in the list.  It’s an incredible achievement and the enourmous success of Us will only give him more creative freedom to pursue ambitious new projects, both as a director and producer.

Us begins in 1986 when a young Adelaide Thomas is holidaying with her family at a beachside carnival in Santa Cruz.  When she wanders into a Hall of Mirrors, she encounters her doppelganger who lashes out at her from the darkness.  What happens next isn’t quite clear but when Adelaide’s parents find her, she is startled and unable to speak.

Fast forward to present day and we see that Adelaide has recovered, grown up and is very much settled into married life with her husband Gabe and two kids Zora and Jason.  They are visiting Santa Cruz for a holiday – Gabe is keen to impress their rich friends there – but we sense that Adelaide still has some trepidation about revisiting the scene of her childhood trauma.

After a day at the beach with their friends, the Tylers, Adelaide has a scare when her son Jason wanders off alone.  Jason comes across a disturbing sight – a man standing with his arms outstretched, dripping in blood – but then is bundled back to safety by Adelaide who takes the family home.

That night, the Thomas family settle in for a quiet night of board games or so they think.  A noise outside alerts them to the fact that their doppelganger family is outside, decked out in red jumpsuits and intent on terrorising them.  All of the doppelgangers are mute – except for Adelaide’s double Red, whose speaks in a disturbing high pitched rasp. 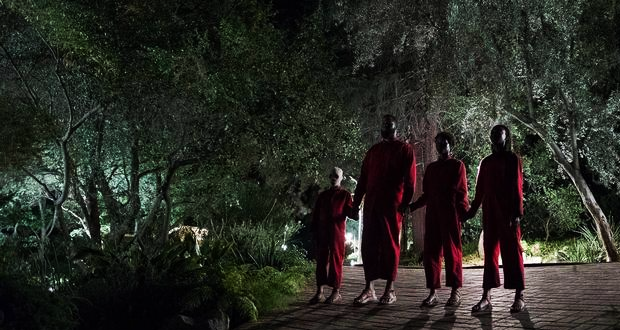 That’s more or less the set up for Us which then unfolds as a mesmerising and enthralling horror-comedy as the Thomas family do battle with their evil doubles and come to grips with the exact nature of ‘the Tethered’ as Red calls them.

Where to start?  There is so much to enjoy about this film.  Taken at face value, it is a wildly imaginative and enjoyable horror romp.  Heading into the final act, I was totally absorbed with what I was watching but I literally had no idea where the film was headed.  Us is also full of same comedic barbs and one liners that Get Out had, so you’re often switching between frights and fits of laughter.  For the handful of directors and writers who have the skill to pull off horror-comedy, its one of my favourite types of cinematic experiences to share with others.

In just two films Jordan Peele has established himself as an accomplished director with an incredible eye for detail and with Us, he injects the film with plenty of double-meanings, clever allegories and interesting symbolism, which makes it a film that can be studied, pulled apart and rewards multiple viewings.  Even from the first trailers, it was apparent that the title could be taken as a double meaning for either the family or the country.  There are countless shots in the film that serve as visual metaphors for the “duality” theme such as the long shadows of the family members when they walk along the beach and the bisecting blades of the scissors in the holiday home.  Its possible to extrapolate all sorts of meanings about what the Tethered could represent and I think Peele gives the audience just enough rope to make up their own minds about what the film is a representation of.

Lupita Nyong’o is the stand out performer in the film, giving an incredible dual performance as Adelaide and Red.  After last year’s snubbing of Toni Collette in Hereditary and award shows having a long-standing prejudice towards the horror genre, I’m not holding my breath for Nyong’o to receive much by way of formal accolades but believe me, I think she delivers one of the most striking onscreen performances of 2019 in Us.

The horror genre is one of my favourites and what I admire most about Jordan Peele is that he clearly has an affection for it too but he is never too reverential in his film-making or overly familiar with a reliance on tropes.  Get Out and Us feel refreshingly unique in a genre that is generally happy to revisit the same material over and over again.  I love the casting choices of his films.  The soundtrack.  The style of dialogue. It makes his films stand apart in a very crowded field.

Us is an exceptional sophomore effort by Peele.  It shows his growth as a film maker, steps away from the more pointed social commentary of Get Out and instead goes down the path of creating its very own strange and disturbing mythology.  It won’t be remembered as the scariest film of 2019 but is surely must be one of the most imaginative.

A family’s serene beach vacation turns to chaos when their doppelgängers appear and begin to terrorize them.

Summary : A fantastic and worth follow up to 2017's Get Out, Us is an absorbing horror film full of small details and Easter Eggs that will reward repeat viewings