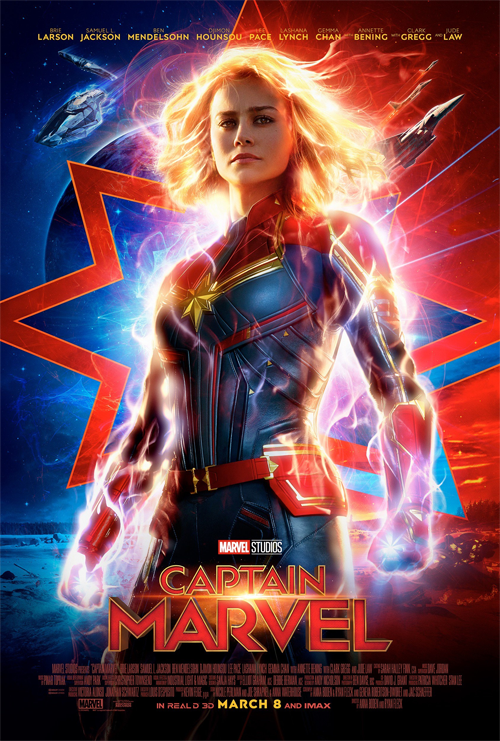 At the end of Avengers: Infinity War, when the Earth’s Mightiest Heroes are soundly beaten by Thanos and he affects The Snap, there is a final snippet during the credits of the film where Nick Fury sends out a distress call for help.  When Iron Man, The Hulk, Spider-man, Doctor Strange, the Guardians of Galaxy and Thor aren’t enough to stop Thanos as he gains possession of the Infinity Stones, there is only one person left who can turn the tide.

Hint:  It’s not Hawkeye or Ant-man.

It is Captain Marvel who answers the call.

Brie Larson plays Carol Danvers, an ex-U.S airforce pilot who gains superhuman powers when her DNA is altered during an accident.  She is also a member of the intergalactic Kree Starforce which is engaged in a conflict with the Skrulls.  After crashlanding on Earth, she is befriended by Nick Fury of S.H.I.E.L.D and along with her cat Goose, is roped into a wild adventure as she tries to make sense of her place in this intergalactic conflict and grows into her role as a protector of Earth. 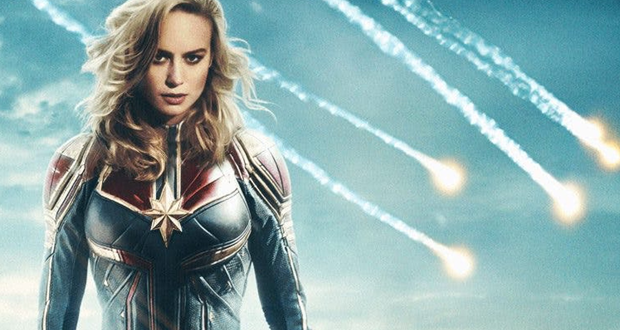 I’ve been looking forward to Captain Marvel for a long time and was very interested to see how Marvel would approach this film.  Right from the opening scenes, its clearly that Captain Marvel has its own identity and sense of female empowerment that is distinct from the wide eyed optimism of DC Entertainment’s Wonder Woman.  Whereas Princess Diana falls in love with the first man she meets and shares the same sort of boy scout idealism as Christopher Reeves’ Superman, Brie Larson’s Carol Danvers is more of a take-no-shit bad ass who electrocutes a biker when he tells her to smile and takes his jacket and Harley for good measure.  Danvers is a worldly, self assured hero who doesn’t suffer fools gladly.

The overall tone of the film is firmly embedded with tongue-in-cheek humour and a heavy dose of Nineties nostalgia.  Set against a soundtrack that pumps out TLC, No Doubt, Salt-N-Pepa and Nirvana, Carol Danvers and Nick Fury’s adventure is a trip down memory lane for Millennials as you’re invited to revisit Blockbuster Videos, Radio Shack, pagers, troll dolls and internet cafes.  It’s a lot of light-hearted fun which makes the film an easy watch, if not a slighter experience compared to the likes of Black Panther or Captain America: Winter Soldier.

I must admit, I did appreciate that the producers of the film understand right from the get-go that Captain Marvel needs to be positioned as a credible foe for Thanos and so precious little time is wasted in the film going through the motions of ever showing her in peril.  Typically, the most boring chapter of any super hero film is the third act where everything devolves into punches and kicks before the hero defeats the villain.  In Captain Marvel, Danvers makes short work of anyone she comes up against and the film’s final battle against the film’s true antagonist is hilariously short and sweet.

Although it’s not likely to be remembered as one of the best films in the Marvel Cinematic Universe, Captain Marvel is an entertaining romp and does exactly what it needs to in establishing Carol Danvers as the missing piece of the puzzle needed to stop the mighty Thanos.  Brie Larson is a perfect casting choice and with the character now well established, I look forward to seeing what other adventures they can come up with for her and Goose.  Perhaps a sequel set in the early 2000s where we revisit Nelly, Kazaa and first generation iPods is in order.

Carol Danvers becomes one of the universe’s most powerful heroes when Earth is caught in the middle of a galactic war between two alien races.

Summary : Captain Marvel is a light-hearted and entertaining chapter in the MCU that introduces audiences to an intergalactic hero destined to help bring down Thanos

Previous: Resident Evil 2
Next: Us