Slumdog Squarepants: Why I’m Looking Forward To The Delhi Games 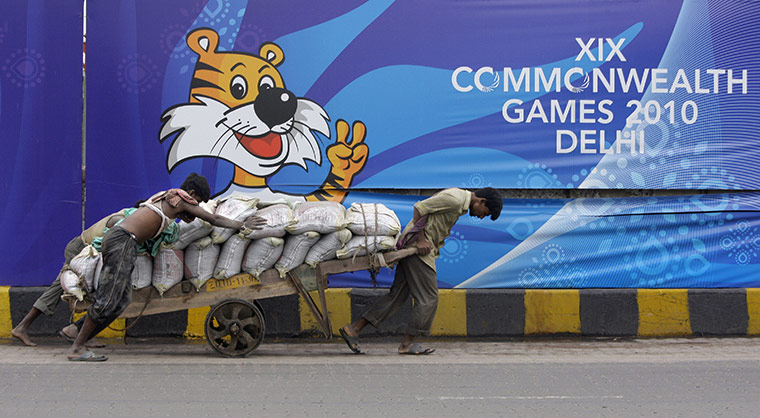 Its quite possible that one of the most fascinating things to watch on TV over the coming weeks will be the Commonwealth Games in Delhi.  And I don’t just mean because Australia will win five million gold medals in the swimming.

The Games are currently under a fair bit of media scrutiny about whether they should go ahead or not.  I mean, its not just that people are worried that terrorists shot at  tourists in India recently but there’s some understandable concerns that hawkers are selling explosives at the marketplace near the stadiums which security apparently made no effort to check.  There’s also the matter of collapsing rooftops, inhospitable accomodation for the athletes, an outbreak of Dengue fever, a ‘beautification programme’ that forcibly moved 100,000 people from their homes, widespread corruption and most of the buildings simply being unfinished in their construction 11 days away from the event.

What struck me was the online response from the Indian community.  They collectively raised their middle fingers to the critics and stood by their people.  You want to host a Commonwealth Games in Delhi?  Well this is what you get!

Check out this awesome blog addressed to the organizers of the event:

Just read this news item about your displeasure with the state-of-the-art Commonwealth Games village we have prepared in Delhi. Must say we are disappointed with your disappointment.

You’re not being a good guest.  You see we have spent billions of dollars on this event.

A good guest is nice to the host. You sleep where we put you. You eat what we feed you. No we-are-from-a-developed-country crap there. But you are behaving like that NRI (non resident Indian) who visits his family in India and then complains about the coir mattresses and power cuts.

And as an optimistic government employee points out, at least you didn’t have to survive the plague:

“The games will definitely get India name and fame,” said SK Najpal, a 58-year-old civil servant. “There are some hurdles, but don’t worry. These foreign athletes should be less panicky. I have seen plague in Delhi and it didn’t kill me.”

I’m actually looking forward to the Commonwealth Games now.  I mean, moreso than a couple of weeks ago when my interest level was nil.  I like the idea that all the major stars have pulled out.  That it will be a grass-roots amateur event like the Olympics from a hundred years ago.  Did you know Scotland has a girl competing who learnt to swim by having her dad tie her to a giant sponge and chucking her in the pool?

Having the Games contested in shoddy half-finished venues that are waterlogged and flea-bitten will make a nice change from the sanitized affair that Beijing was (which was still impressive but in a different way).  As a lot of the Indian community point out, what you’ll see at these Games is the real India, warts and all.  And if that means there are hawkers selling counterfeit medals outside the stadium or there’s livestock wandering across the track or the Athlete’s Village is caked in mud then so be it.  Lets enjoy this for what it is.

Previous: iPad App of the Week: Words With Friends
Next: TV Show Round Up: Survivor, The Wire, Modern Family, Glee, Party Down and The Event