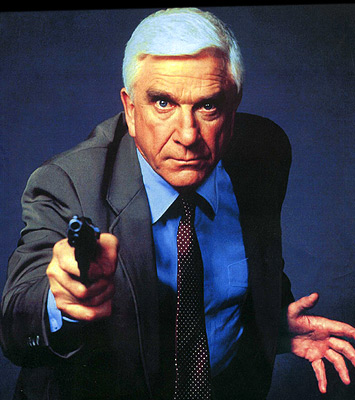 I was saddened to hear over the weekend about the passing of Leslie Nielsen, star of The Naked Gun series and scene stealer in Airplane!

It says a lot about Nielsen’s lasting impression on popular culture that his death dominated so many news headlines and was mentioned by such a vast cross section of personalities on Facebook and Twitter despite the fact that his most notable performances were in films that are now over twenty years old (Christ, that makes me feel old).

Much has already been written in obituaries and tributes about Nielsen’s qualities as a comedian.  He was the master of deadpan.  He had a history of playing stoic straight laced characters for the first thirty years of his acting career and then he parlayed that brilliantly into his roles as a comedian where he acts completely oblivious to the chaos going on around him.

He also had a knack for delivering lines perfectly with an impeccable sense of timing and body language.  One of my favourite Leslie Nielsen scenes was the one that Pat linked to on Facebook:  when he plays his most famous character, Lieutenant Frank Drebin and he takes the place of an umpire in a baseball game.  On paper, the scene doesn’t sound particularly funny.  All he has to do is call the pitches.  It’s just the way that Nielsen shifts so preposterously from being nervous and uncertain with his delayed first call (‘…strike?’) to his impossibly boisterous and pre-emptive third call (‘steeeeeerrrriiiiiike threeeeeee!!!’).  It never fails to me make me laugh.

Thats probably the biggest compliment I can pay to Nielsen.  His memorable performances in Airplane!, Police Squad! And The Naked Gun trilogy make them perfect comedies in my eyes and I find that they have unlimited replayability.  I have literally watched all of those films more times than I can recall.  And I laugh throughout those films every time.  At the same gags.  Nielsen was just that funny and lovable in his own inimitable style.  It’s been years since he had done his best films but I’m sad that he’s gone.

Previous: Harry Potter and the Deathly Hallows Part I
Next: The Ashes Game Two – Adelaide