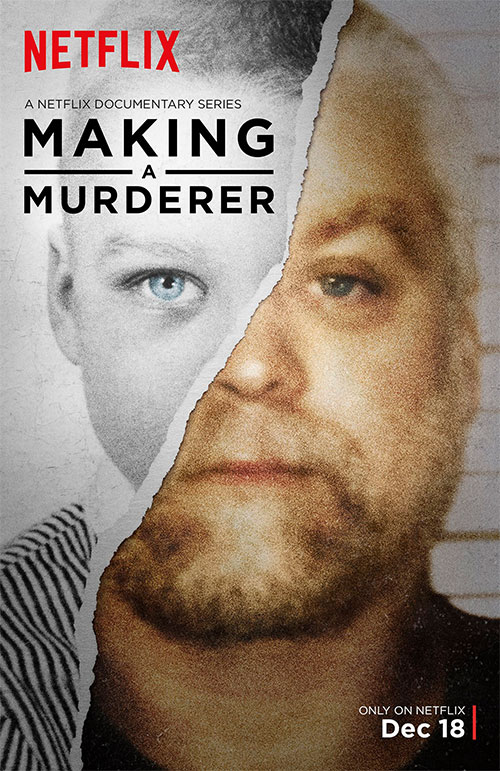 Making A Murderer is a morbid true crime companion piece to last year’s The Jinx.

In The Jinx, we learn about Robert Durst, a multi-millionaire who had the power and influence to seemingly buy his way out of multiple homicides over the course of his lifetime (although the film does end with an incredible final twist).  With Making A Murderer, it tells the opposite story.  A man from a low socio-economic background who sensationally appears to be prosecuted for a murder he did not commit -not once but twice.

It is an infuriating, mind-bending, truth-is-stranger-than-fiction show that will likely unnerve even the most wide eyed optimist’s view on law enforcement.  The gross miscarriage of justice so coolly handed out by the prosecution and supported by so many individuals in the series (policemen, investigators, witnesses, media personalities) serve as a warning that this is the sort of lynch mob mentality that could happen in any community.  It’s a modern day Salem witch trial in which the assumption of guilt hangs heavily over the accused before the trial even starts.

Making A Murderer tells the story of Steven Avery, a troubled ne’er-do-well who wrongfully served eighteen years in prison for a rape charge before being cleared by DNA evidence, only to become the prime suspect in a homicide case less than two years after his release.  This ten episode series gives us a brief (yet alarming) glimpse of Avery’s initial conviction in the mid Eighties before jumping headlong into the case where he and his nephew Brendan are accused of the murder of Teresa Halbach, a car magazine photographer whose remains are uncovered at the site of the Avery family estate. 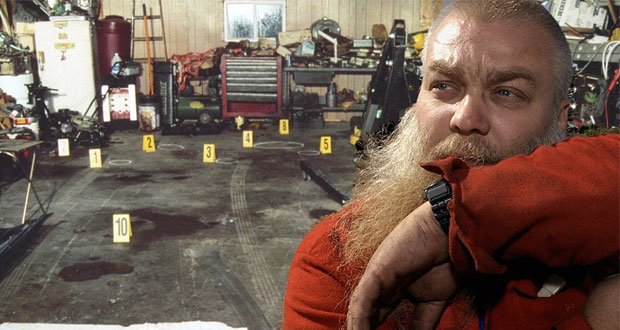 For a documentary told without a narrator, Making A Murderer does an extraordinary job processing a massive volume of information and presenting it to the viewer in a way that is easy to follow.  The extended Avery family are a colourful cast of misfits.  The father Allan Avery is a gruff and grizzled mechanic.  The mother Dolores Avery looks like she needs a hug.  There’s some shifty looking relatives like Scott Tadych and Bobby Avery with questionable haircuts and even more questionable motives.  Then there’s Teresa’s brother Mike.  Key figures in the Manitowoc police county.  Head prosecutor Ken Kratz.  Defence attorneys Dean Strang and Jerry Buting.  By the end of the series, you’ll come to know this motley crew very well and will likely form strong opinions about nearly all of them.

From the open moments of the case, Making A Murderer is compelling viewing.  The lead up to the trial begins in fantastical circumstances – a media briefing from Ken Kratz describing a gruesome murder that involves kidnapping, sex crimes, gunshots to the head and slashed throats.  Kratz explains that the case was blown wide open when teenager Brendan Avery couldn’t stand the guilt of his actions and confessed in full to law enforcement officers.

Taken on face value, it appears to be an open and shut case.  Brendan’s confession, Teresa’s car found on the Avery property and her remains in the burn pit behind Steven’s trailer all point to a terrible and senseless murder perpetrated by a murderous uncle and nephew.

Or so we think.  We are introduced to Steven’s defence attorneys Dean Strang and Jerry Buting.  In a series that is otherwise depressingly populated with greedy, corrupt and incompetent officials of the criminal justice system, Strang and Buting are a shining beacon of hope.  Both are intelligent, lucid and tenacious law practitioners.

The pair pick apart the case at every turn.  They poke glaring holes in the testimonies of the witnesses and experts called upon by the prosecution.  They cast doubt over the reliability of the DNA evidence in a clear and articulate fashion that can be understood by the laymen on the jury.  Most importantly – Brendan’s confession – the centrepiece of the prosecution’s case appears to be blatantly coerced out of a young man with a low IQ and no idea what he is getting into.  Confused and disoriented after confessing to the murders – he asks his mother on a heart breaking phone call whether he will be home ‘in time to watch Wrestlemania.’ 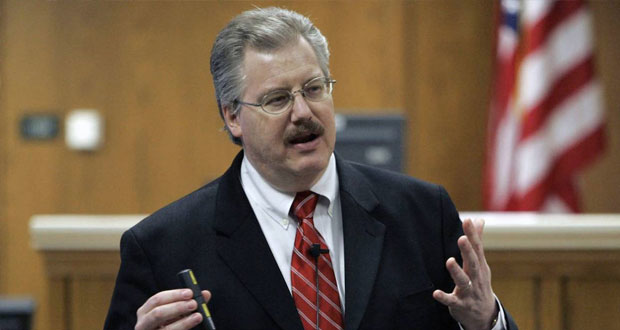 Strang and Buting show incredible prowess in dismantling the prosecution’s case.  On more than one occasion they run circles around the hapless Manitowoc police county officers – none more memorably than when they catch out the dubious Officer Lenk putting in a phone call to dispatch asking for the license plate of Teresa’s vehicle, describing the appearance of the car before he should have any knowledge of what it looks like.  He is caught out in a devastating lie – a total collapse of his credibility – in a scene that would be right at home in a fictional courtroom drama.

Despite the number of times the defence team appear to blow the prosecution’s case out of the water, Strang in particular remains cautious with his optimism.  “No sane lawyer looks forward to presenting an argument to the jury that the police framed his client.”

The madness in the courtroom in of itself would make for incredible viewing but the series also has complete and unfettered access to the Avery family’s reaction to the trial.  We see their highs and lows, their fights with one another and their musings on the trial itself.  The Averys have that distinctive turn of phrase and mannerisms of the American Mid West popularized by the films of the Coen Brothers (most notably Fargo).  So often conversations about dark and heavy handed subject matter – prison, murder, suicide etc – is discussed with a wry sarcasm and punctuated with ‘uh huh’s and ‘yeah’s.

The series appear to show conclusively that there is reasonable doubt over Avery’s guilt.  So who did commit the murder?  Steven’s brother-in-law Scott Tadych and nephew Bobby Dassey both have absurd alibis to account for their whereabouts at the time of the murder (“we drove past one another on the road and both looked at the clock and saw it was 3:15pm”).  Teresa’s ex-boyfriend supposedly ‘guesses’ the password to her voicemail when she is reported missing and deletes the messages.  Incredibly, none of these people are ever pursued by the investigators as possible suspects.

Ultimately, it doesn’t fall on Strang and Buting to identify Teresa’s killer.  They are there to prove reasonable doubt that Steven Avery committed the murder.  They appear to do this emphatically but as viewers will suspect right from the outset, it is a fruitless endeavour.  As Strang laments during an interview before the verdict is delivered – “Selfishly, I hope he is guilty.  Because if he isn’t, and innocent man is locked away for a second time…I don’t know if I can bear that.” 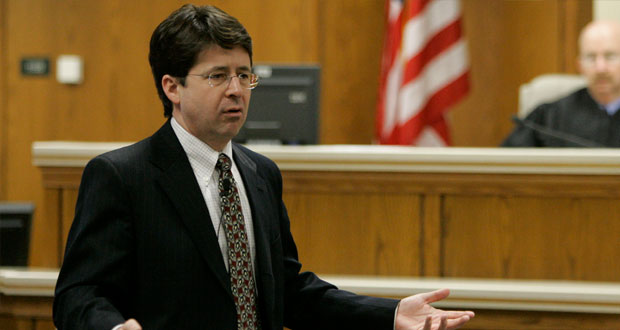 It’s difficult to feel anything but helpless by the end of the series.  There are so many people that appear complicit in this miscarriage of justice.  Brendan’s original defence attorney Len Kachinsky is a mug for the camera and never once entertains the notion of his innocence.  The Manitowoc County police officers almost certainly planted evidence.  In delivering Steven Avery’s sentencing, Judge Willis pointed to Avery’s ‘crimes of escalating severity’ which reveals that he doesn’t believe in Avery’s innocence from the trial in 1985 of which he was cleared by DNA evidence.  Absurdly, Steven and Brendan are both prosecuted of the same murder with Ken Kratz successfully arguing that the murder took place in the garage in one case and in Steven’s trailer in the other.

The series is damning to watch.  It’s not clear whether the rage will be sufficiently maintained to give either Avery another trial or if there will be any ramifications in the Wisconsin justice system.  The only small measure of satisfaction we gleam from the final episode is that one of the primary instigators in perverting the course of justice – Ken Kratz – was publicly humiliated and resigned in disgrace when it was revealed that he sexted a DV victim years later.

Making A Murderer is a sobering and disquieting program.  There are brief pockets of humanity – such as Mr and Mrs Avery’s unwavering loyalty to their son – but mostly its just madness.

Tagged with: Making A Murderer Netflix the jinx

Previous: Youtube Friday – Highlights of the Asian Cup
Next: Joy