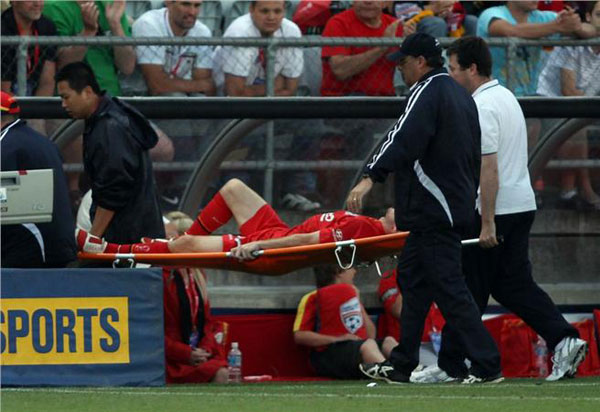 The first game of the New Year for Brisbane Roar saw them face their fiercest challenge to The Streak yet:  a top of the table clash away to Adelaide United and without three of their key players: Matt McKay (international duty), Thomas Broich (groin injury) and Ivan Franjic (pulled his hammy).  This game was seen to be a major test of the Roar’s depth in their squad.

Adelaide were keen to pull themselves out of a recent form slump that has seen them lose four out of their last five games.  It’s a credit to their exceptional form at the start of the season that they’ve maintained the second spot on the ladder.

The first half saw the Reds pile on a heap of pressure.  Less than five minutes of play had passed when Cassio fired a wicked shot which Roar keeper Theoklitos parried onto his own crossbar with his fingertips.  In the opening passage of play, the Reds looked the goods.  It took almost fifteen minutes before the Roar managed to find their shape and begin to assert some pressure of their own.  Clearly a period of adjustment was required when they were missing their midfield general Matt McKay.

For reasons that weren’t entirely clear to me, the crowd at Hindmarsh stadium were really giving Roar striker Solorzano a hard time, booing him whenever he got the ball.  He seemed unphased though and looked dangerous whenever he was on the ball.  As for ex-Roar striker Sergio Van Dyk, I swear he seems to bring his B-game to matches against his old club, where he seemingly manages to miss shots at goal that he reliably puts away against any other club.

The game remained scoreless at halftime.  It was an entertaining half of football though that was of the standard you’d expect from the two finest teams in the comp.

The second half for Brisbane saw the welcome return of pint-sized Henrique, who has been out of action since Round Five.  In his first game back he looked sharp and still obviously has the incredible pace and footwork that made him such a crowd pleaser in past seasons.

On the stroke of the seventieth minute an attempted throughball by the Roar took a deflection off Reds defender Iain Fyfe and landed in the path of Solorzano.  Solo was one on one with the keeper Birighitti and he made the most of it, striking the ball cleanly into the back of the net.

For the rest of the game, the Roar held firm and despite some jitters in injury time, the Reds couldn’t break the Roar defence.  The Roar retain their eleven point leader at the top of the table with both the minor premiereship and qualification into the Asian Champions League looking all but certain.  They extend their record breaking unbeaten streak to nineteen matches. 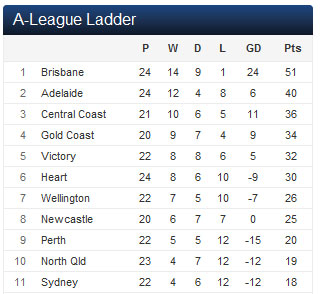 Previous: Last blog of 2010
Next: The Ashes Game Four – Checkmate