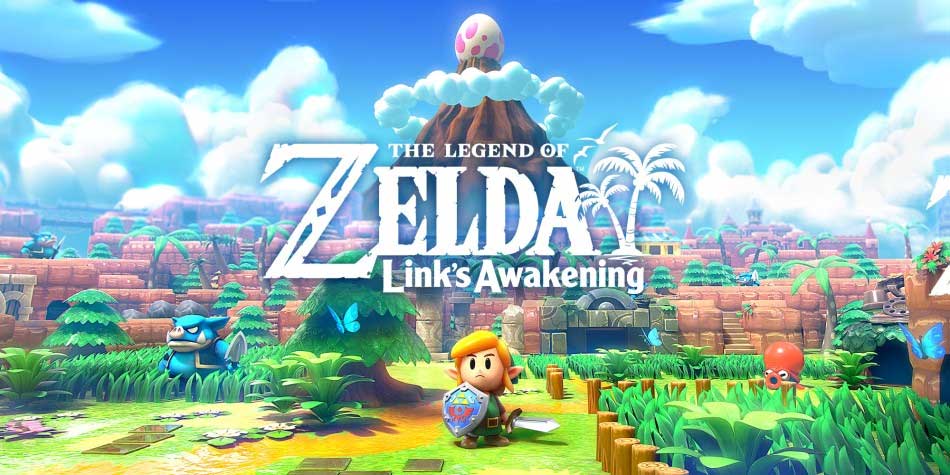 It’s a funny thing, two years after the release of The Legend of Zelda: Breath of the Wild which famously upended the traditional Zelda template – doing away with traditional dungeons and rigid linearity – here we are getting excited about The Legend of Zelda: Link’s Awakening, a remake of a video game from 1993, that squarely takes us back to the format that Nintendo fans had been playing for three decades.

But for the most part, it’s a welcome return.  Unless you had been going out of your way to revisit the Zelda back catalogue, the last time anyone had an opportunity to play a traditional top down Zelda game in this style was 2013’s excellent A Link Between Worlds.  Absence makes the heart grow fonder and six years is an eternity in video games.  And for all the good that Breath of the Wild did, I think in retrospect, everyone can agree the absence of traditional dungeons is a knock against the game.  In Link’s Awakening, you get eight glorious dungeons waiting for you to jump in and explore.

The storyline, for what its worth, is very short and sweet.  Link is sailing out at sea, gets caught in a storm and is washed up on the mysterious Koholint Island.  He is rescued by villagers Tarin and Marin who explain to Link that in order to leave the island, he must gather eight Instrument of the Sirens and play them to the giant egg perched atop Mt. Tamaranch.  This awakens the Wind Fish, guardian of the Island and the only one able to free Link. 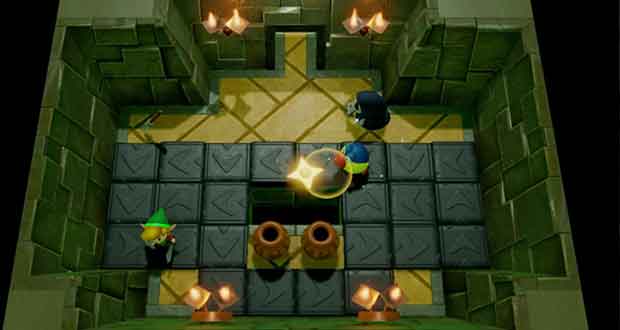 The Legend of Zelda: Link’s Awakening is a remake of the 1993 Gameboy Zelda title, a top-down 2D Zelda that plays in a similar vein to A Link To The Past on the Super Nintendo.  The game has received a substantial graphical overhaul but beyond that, Link’s Awakening is actually more or less faithful to the design of the original.

To that end, it’s an enormous feat of game design by Nintendo’s developers from the early Nineties that this game still holds up as well as it does.  It’s not merely ‘playable’, its unreservedly fun and the balance of accessibility and difficulty doesn’t feel out of place when compared to modern action RPG standards.  I don’t believe playing the original game or even any traditional top-down Zelda game is a prerequisite to enjoying Link’s Awakening.  If anything, there are a couple of minor Quality of Life improvements that Nintendo have snuck in – fast travel portals and map markers – that really smooth out the edges.  There were maybe a couple of points in the game where I think they could have better communicated what to do next but these are very minor quibbles when you look at the overall package.

Ever since Wind Waker, Nintendo have not been afraid to tinker with the art style of the Zelda franchise and Link’s Awakening is no different.  Developers Grezzo have given the game world a diorama look and feel thanks to the use of a tilt-shift effect on the camera lens which exaggerates the depth of field.  The character models are then stylized to look like animated plasticine figures.  I can’t think of any game before this that has utilized this look and although it may be somewhat divisive (I wasn’t sure myself when I saw the original trailer), it only took me an hour or so playing the game to really warm to it.  Not only do I like the look of Link’s Awakening aesthetically, I think it even ties in quite nicely with the game thematically, which has a dream-like otherworldly quality to its story. 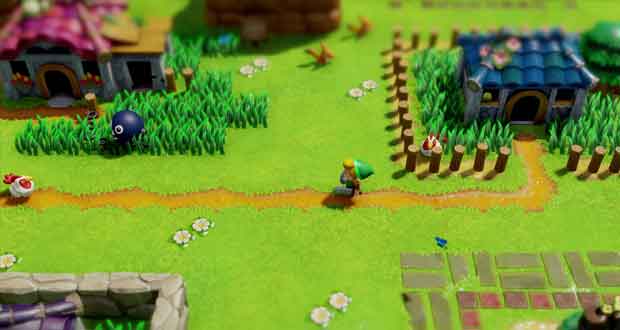 As for the game itself, I’m delighted that Grezzo got the green light to make this game.  I’ve had a couple of attempts to play Link’s Awakening when it was available on Virtual Console for the Wii and 3DS but both times I bounced off it because the Game Boy graphics were too rudimentary for me to engage properly with the game.  Playing the Switch version offers a tantalising mix of contemporary graphics and classic, nostalgia-inducing gameplay.  As someone who holds up A Link To The Past as one of their favourite games, nothing beats the satisfaction of playing through a traditional top-down 2D Zelda dungeon and having that ‘aha!’ moment when you solve a puzzle or find the key that lets you explore a previously inaccessible area.

Link’s Awakening on the Gameboy was actually a rather quirky, oddball iteration of Zelda.  Firstly, there’s no Princess Zelda.  Secondly, the game is littered with cameos from other titles including some fairly straightforward ones (Bob-ombs and Princess Peach from Mario) and some downright obscure ones (Will Wright’s likeness from the Super Nintendo version of Sim City).  But it suits the tone that the game is going for and I’m glad Nintendo kept these cameos when modernizing the game for the Switch.

So where to next for Legend of Zelda remakes?  In recent years we’ve had direct updates to Ocarina of Time and Majora’s Mask.  A re-imagining of A Link To The Past with A Link Between Worlds.  And this latest update for Link’s Awakening.  There’s a handful of obvious choices Nintendo could look at:  Oracle of Seasons/Ages or possibly Minish Cap.  None of those three games are particularly easy to access or play in 2019 so any of them would be welcome choices.

This year I’ve played lots of remakes of old classics.  The Crash Bandicoot trilogy, the Spyro trilogy, Crash Team Racing and Resident Evil 2.  I’ve had fantastic experiences with all of these games and it shows that they still have plenty to offer for modern audiences, as long as the developers are smart about recognizing what can be left alone and what needs a tweak.  Some classic games are perfect just as they are (Super Mario World etc).  Others could stand to benefit from updated graphics (Crash).  Others might need small Quality of Life touches to make them more accessible.  Others benefit from wholesale changes like Resident Evil 2.  But whatever the case, its clear that developers in the last two years have been getting it right, more times than not.  I’ve never had a better year playing remakes of classic games than in 2019 and Link’s Awakening is right up there with the best of them.

After his ship is caught up in a storm, Link washes ashore the mysterious Koholint Island.

Summary : Great game design is timeless and its extraordinary how well this remake of a 1993 classic holds up in 2019.

Tagged with: Nintendo Nintendo Switch The Legend of Zelda