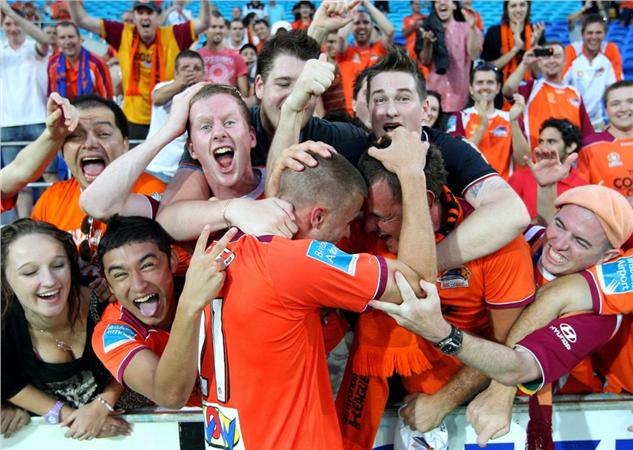 Brisbane played their second home game at Skilled Park on Saturday against the Melbourne Heart.  Having tied the 22 game undefeated streak of Apia-Leichardt from 1987, this would be the game to break the record.  For Melbourne Heart, they currently sit in 6th position in the A-League standings and would be desperate to secure some points to ensure they qualify for finals football.

The Roar got things started in perfect fashion.  A goal from Solo inside 5 minutes put them up early and they doubled the lead in the second half when once again, young James Meyer latched onto a through ball from Thomas Broich and toe poked the ball past Clint Bolton for his fourth goal in three games.  I believe he currently averages a goal every 30 minutes or so in his professional career.  This was the first time we got to see him play for a full 90 minutes and as we all suspected, he’s still pretty loose in general play but if he’s going to continue to develop this inate ability to get on the scoresheet then who cares if he’s got a sloppy first touch?

A defensive lap in the seventieth minute saw Sibon claw one back for the Heart but ultimately, they didn’t have it in themselves to find another.  Brisbane closed out the game 2-1.  The conclusion of the Adelaide vs Central Coast game which the Mariners won 2-1 confirmed that Brisbane would have to wait a week before being officially confirmed as the Premiere’s Plate winners of 2011 as it is still mathematically possible for the Mariners to catch them.

Two games remain in the regular season.  A road game midweek to the Northern Fury and then one final home game back at Suncorp Stadium where they’ll be presented with the Plate after a showdown with old rivals Gold Coast United.  Then…it’s Finals Football time. 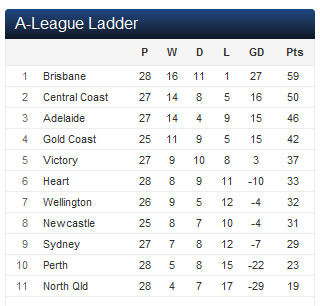