An Evening With Colonel Chris Hadfield 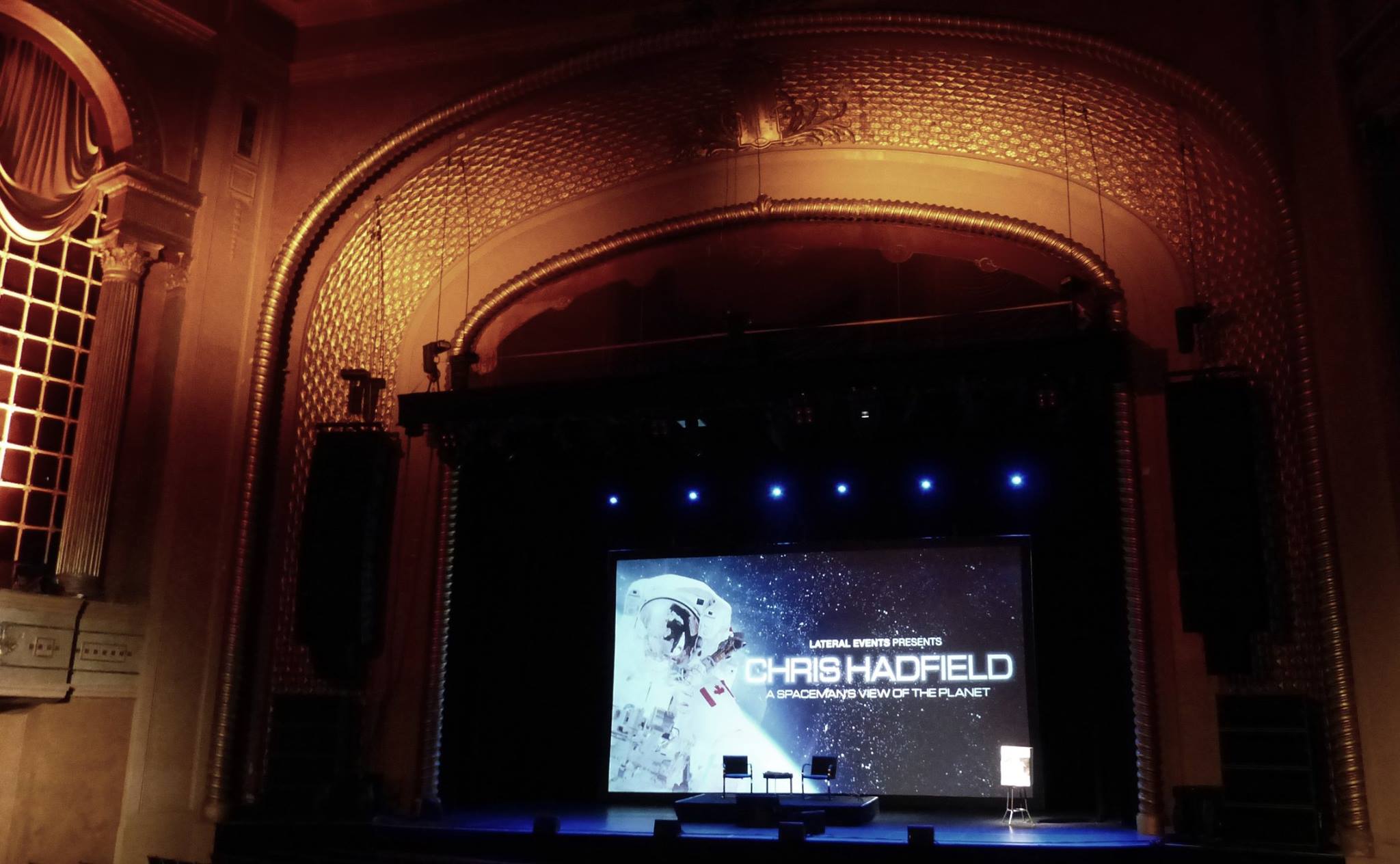 Hasn’t everybody had a moment – even a fleeting one – where they imagined what it would be like to travel to space?  You might have been inspired by a science fiction film or tv show like Star Trek.  Maybe you are old enough to remember the space race between America and Russia or the moon landing.  For my wife Jen, space travel is the most cherished goal on her bucket list.

Most people have thought about space travel but there are precious few who have seriously persued that goal and fewer still who have attained it.  536 people according to Wikipedia.  Colonel Chris Hadfield is one such person and two years ago he attained pop culture notoriety when he released a video of himself singing David Bowie’s Space Oddity on board the International Space Station.

Hadfield stands a unique figure even amongst astronauts.  Not only did he have the talent and dedication required to experience space travel three times for a combined 160 days but he is also a talented writer, musician and public speaker.  He is friendly, charismatic and well spoken.  He seems to have boundless energy and even as he has retired from active space travel, he keeps busy by engaging people around the world in all sorts of projects.

Last week he did a Skype conference with 10,000 Australian school children to answer questions about space travel.  Last year he participated in a music fundraiser for Canadian schools by performing a song he wrote with Barenaked Ladies which he performed simultaneously with 200,000 Canadian school kids across the country.  Hadfield seems to have the talent of a dozen men and the energy of another dozen more when you look at his legacy and what he has accomplished in his life.

We saw Colonel Chris Hadfield give a Q+A to a crowd of 2,500 people at the Palais Theatre in Melbourne.  The evening was hosted by Ray Martin and Hadfield fielded questions both from his host as well as from school children in the audience.

When did he want to become an astronaut?  When he was ten and witnessed the moon landing.  How did he become an astronaut?  Canada didn’t have an international space program but he said he didn’t let that deter him.  First he became a qualified engineer.  He also pursued some medical qualifications.   Then became an accomplished RCAF fighter pilot.  One of Canada’s finest.  Then he became a test pilot.  Then he studied and became fluent in Russian.  He also married young and became a father of three.  Finally, his application to become an astronaut in 1992 was accepted as one of 4 candidates out of 5,330 applicants.

I never imagined becoming an astronaut was easy but I was floored when Hadfield rattled off his list of qualifications.  In Star Trek, each character was assigned a particular task that was their expertise.  Captain Kirk was the leader.  Bones was the medical officer.  Scotty the chief engineer.  Sulu manned the controls on the deck.  Chris Hadfield apparently mastered all of these disciplines himself.

Hadfield is an animated character and could barely be contained in his seat.  When explaining his body positioning on board the space shuttle he would get out of his chair, lie on the floor with his feet in the air.  He is very animated, enthusiastic and passionate about explaining space travel.  He makes it sound like the most exhilarating thing on Earth.  The International Space Station orbits the Earth every ninety minutes.  It takes seven minutes for it to pass over Australia.  He spent 160 days in space over three missions and calculated that he has spanned the globe over 9,000 times.

He told one of his most famous stories.  Of a time when he was attaching a robotic arm to the exterior of the ISS and some unidentified liquid got in his eye, momentarily blinding him.  He talked about having to keep his composure and talking with NASA as he navigated his way out his predicament.  If that sounded horrifying, later on he shared the experience of a recent Italian astronaut who had water enter his helmet in space.  With no gravity, it formed a sphere around his face, nearly drowning him.

On a lighter note he talked about his favourite science fiction shows.  Star Trek was a stand out.  He knows the narration by Captain Kirk at the start of each episode by memory.

Hadfield also opened up and talked a bit about interactions with his family.  When he considered quitting on his dream to become an astronaut during his days as a fighter pilot, his wife Helena changed his mind and encouraged him to keep striving.  On his first two missions, his children were too young to understand any kind of risk associated with space travel.  For the third however, they had a family discussion to address the fears the children would have.  Mindful of his children’s concerns, Hadfield called the family via Skype on the first day.  Then the second.  By the third day, he said the children had become bored by his frequent calls and they asked him to chill out.  His children have also become so accustomed to getting invited to the White House that his youngest child complains about “having to see the president again.”

As well as answering questions about space travel, Hadfield also took a moment to address the matter of climate change.  He talked candidly of his experience in space watching the surface of the Earth.  The desolate beauty of the Australian outback.  Seeing the lush greenery of his home country Canada.  Then he talked about cities that are riddled with air pollution like Beijing and Los Angeles.  L.A he describes as appearing as a ‘grey smudge’ on the surface of the Earth.  He showed photography slides of great lakes that have shrunk and turned into sludge.  He talked about how rising tides would displace millions and cause a huge surge in refugees.  He implored us to hold our governments accountable and to do everything possible to address climate change in a meaningful and sustainable fashion.

I don’t think anyone had the heart to tell him our prime minster believes that ‘coal is humanity’s friend’ or that he didn’t believe climate change of any kind (let alone one caused by humans) until a couple of years ago when it became politically untenable to do so.

The show ended with Hadfield taking questions from children in the audience.  How do you brush your teeth in space?  How do you sleep in space?  Like the astrophysicist Neil deGrasse Tyson, when Hadfield looks to the future he is most excited about the prospect of crewed space flights to Mars.

Hadfield closed the show by playing guitar and singing Space Oddity to the audience.

I left the show filled with wonder.  Colonel Chris Hadfield is a man that seems spoiled for talent.  He is unreasonably skilful and talented in so many academic fields.  And yet he remains humble and a diligent servant for NASA and the cause for space exploration.  I’ll never become a robotics engineer or a fighter jet pilot but I hope Virgin Galactic and civilian space travel becomes affordable and common place in my lifetime.

Previous: Summerslam and NXT: Brooklyn Preview and Predictions
Next: The Man From U.N.C.L.E