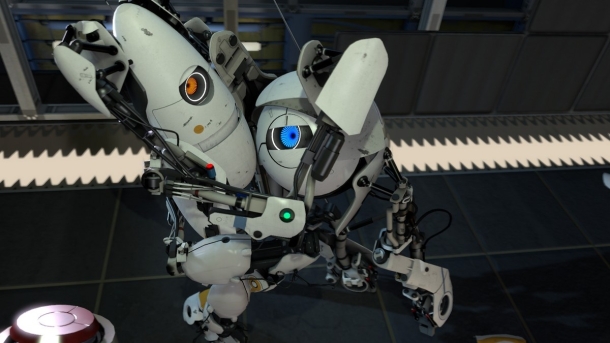 A couple of months ago, Forbes Magazine estimated the value of software developer Valve as sitting somewhere in the region of $2-$4 billion dollars.  Given the relatively small size of the studio, Valve co-founder Gabe Newell observed that this made them a more profitable organisation per employee than Google or Apple.  Few companies in the video game industry are as successful commercially or creatively.

Not only that, the studio is wholy independent.  This means they are free to pursue creative endeavours and aren’t answerable to shareholders to deliver on deadlines.  While this means that sometimes there can be a long development cycle between games such as in the Half-Life series, it also ensures an uncommon commitment to quality is put into their games and a willingness to do drastic things when a game isn’t coming together to their satisfaction.

Nowhere was this creative culture tested harder than during the troubled development of Portal 2.

The original game was a cult hit.  While I’m sure Valve had an idea that the game would be popular, I think even they were taken aback at just how much Portal resonated with gamers.  The gameplay concept was fresh, the writing and humour razor sharp and the length of the game – a quickfire 3 hours – meant that the experience was over and done with before any of it could begin feel stale.  The brevity I feel is a large part of the reason that Portal feels perfect.

That leaves anyone put in the position of making a sequel in an unenviable creative dilemma.  How the hell do you follow up on perfect? It turns out not even Valve had the answer when they first took on the challenge of making a sequel.  A challenging four year development cycle saw original creator Kim Swift leave Valve, the entire game scrapped and started from scratch after 12 months of development and uncertainty amongst the team as to whether the game should even have portals at all.

In the end, the staff who stuck with it over all the years should breathe a sigh of relief and get a pat on the back for their efforts.  Despite the daunting legacy of the original game, Portal 2 manages to be respectable and worthy successor, hitting the same gameplay and humour high notes that the original attained.  And in a more conventional ‘full length’ game no less.

In the single player campaign, we are re-introduced to Chell, the mute heroine from the original.  She wakes up once more in the Aperture Science test chambers only this time she is being lead around by a feckless new AI companion Wheatley, who is voiced by Stephen Merchant.  Merchant’s performance is excellent.  As a gamer himself, Merchant explained that he felt video game dialogue was too perfunctory and concentrated on exposition.  Wheatley on the other hand is a waffler and almost all of his dialogue is unhelpful to your progress. On the other hand, he is hilarious and a wonderful companion during the game.

After familiarizing the player once more with the fundamental portal mechanics from the original, the game kicks into gear with its story and brings back the psychotic and spiteful GlaDOS.  The twisted dynamic between GlaDOS, Wheatley and Chell is hilarious to watch unfold as the power and control in the relationship shifts over the course of the game.

As befitting a bigger sequel full of fan expectation, Valve have added plenty new ingredients into the mix for Portal 2 and made significant improvements to the technical prowess of the game.  The animation of the robots in Portal 2 is a cut above the original and the range of humanistic expressions they manage to draw from the gun turrents and AI cores evokes favourable comparisons to what Pixar accomplished with Wall-E. 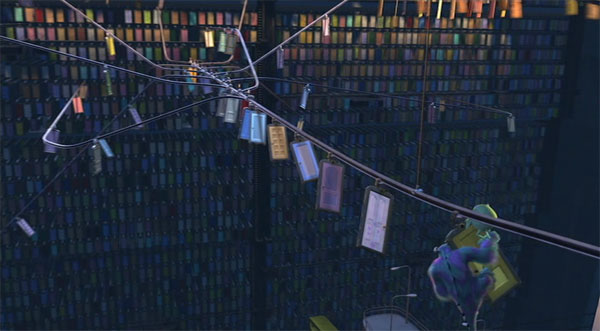 Aperture Science lab reminds me of the Monsters Inc. warehouse

The size and scale of the environments have also been hugely expanded over the original.  I love what Valve did with making the cavernous Aperture Science test labs appear infinitely expansive.  It reminded me once more of another Pixar film, Monsters Inc., which had a similarly gigantic environment for the warehouse where the bedroom doors were stored.

As for the gameplay, Valve has added plenty of new gadgets to keep things fresh.  There are aerial faith plates (basically catapaults), propulsion and repulsion gels, hard light bridges and tractor beams.  Valve are careful to introduce these elements gradually, ensuring the player has mastered and grasped their mechanics and then they really goes to town creatively meshing the lot.  Once again, I felt they got the difficulty level in this game *just* right.  Some of the later puzzles are sure to baffle upon first inspection but they never feel unfair and the satisfaction drawn from solving the trickier challenges is enourmous.

All these components add up together to make for another memorable excursion through the Aperture Science labs.  The game certainly isn’t without its blemishes (in particular the Cave Johnson levels aren’t on par with the rest of the game) but I cannot see anyone who loved the original game not being satisfied with what Valve have accomplished in Portal 2.  Surely that is an accomplishment that you could be proud of if you were foolhardy enough to spend four years of your life trying to build a successor to the perfect game.

This was a triumph

Summary : It obviously doesn't carry the level of surprise that the unassuming original title had going for it but Portal 2 is still more of a good thing. It delights with its puzzles and entertains with its sharp script and witty banter.

Previous: Thor
Next: Super 15 – Round 10 – Queensland Reds vs NSW Warratahs