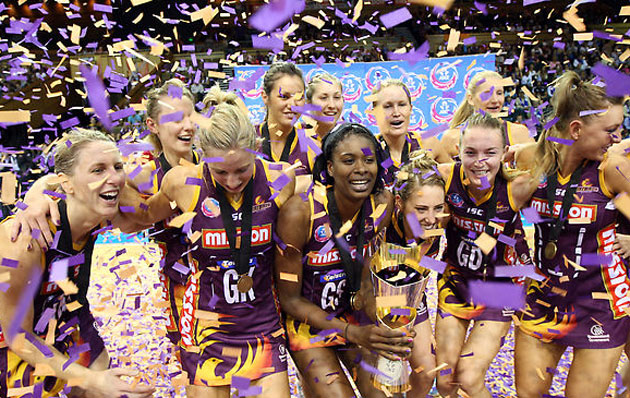 We all know Queensland currently has the Best Rugby Union Club in the World (QLD Reds, ranked top of the Super 15), the Best Football Club in the World (Roar, A-League Champions and holders of the Longest Undefeated Streak in Professional Football), the Best Women’s Football Club in the world (champions of the Womens A-League) and the Best Rugby League Club in the World ( Cowboys).  You can now add another record to the Sunshine State.  We are now also home to the best netball team in the world –  The Queensland Firebirds just defeated the Waikato & Bay of Plenty Magic and the LG Mystics in the ANZ Championship Finals Series and became the first side to go an entire season undefeated.

Jen’s friend at work is a season ticket holder for the Firebirds and invited us to come along to the Major Semi Final and the Grand Final.  It was an interesting experience to watch live netball games.  I don’t really know much about the rules of the sport but I don’t mind watching it on the telly if it comes on.

I really appreciate the opportunity to witness the game live.  The speed of the game and the lively crowds make it quite an entertaining experience.

A few observations I noted from my two games of netball:

– There is a far greater selection of beer at the netball than there is at the Gabba or Suncorp for cricket, rugby, league or football.  It’s also cheaper.

– The Waikato & Bay of Plenty Magic is possibly the most cumbersome sounding name for a sports team I’ve ever heard.

– The Firebirds have a Goal Shooter named Romelda Aiken who is 2 metres tall.  She is far taller than any defender that has the unfortunate task of trying to mark her.  The key to the Firebirds’ season-long success appears to be throwing lobbed passes in the air that Aiken can reach with her super long arms.  She is already an imposing figure as it is but when you consider her impressive arm-span plus her ability to jump another half metre, she is effectively able to catch passes that are being thrown around 3 metres in the air.  There is currently no defender in the league that is able to compete with this.  Once she has the ball she then has a shot at goal which, accounting for her height, is a simple task.  As long as the Firebirds keep lob-passing to Aiken, the Firebirds keep winning.

So just how successful is this formula?  Well I watched the two games in the Finals and the Firebirds won those games 50-39 and 57-44 in very lopsided encounters.  Both games they won comfortably by record-breaking margins and they were effectively over as contests by the end of the 3rd quarter.  Aiken has now scored over 2,000 points.  When you consider that a single team normally scores around 40-50 per game, you get an idea of just how dominant she has been.  She is just 22 years old.

I’m happy our side won but I kind of wish I had witnessed some slightly more competitive games.  I appreciate Aiken’s ‘ability’ but I can’t help feel that her physique and not her technique is the key to the team’s dominance.  I think as long as she remains healthy, the Firebirds will keep winning.  Given that Aiken is only getting started in her career and that many netballers play well into their thirties, I anticipate that the Firebirds may finally lose a game somewhere around 2020.

THE FIREBIRDS WIN THE ANZ CHAMPIONSHIP