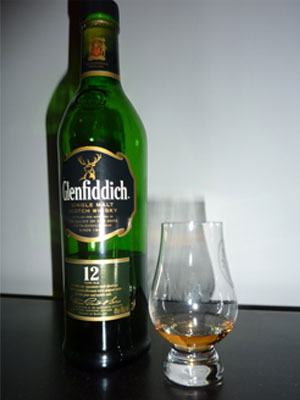 FINISH Its got a short, but pleasing aftertaste that doesn’t really offer up much more than the initial flavours

NOTES Glenfiddich is the best-selling single malt whisky in the world by a massive margin, accounting for a phenomenal 35% in sales of all single malts.  It is available in a dozen different varieties and is seemingly a permanent fixture in every Duty Free liquor shop around the world.  It’s also one of the most prominent single malt whiskys in pop culture having appeared in Elvis movies, Family Guy, Dexter and Inspector Morse.

All this probably makes it a bit of an easy target for whisky snobs.  In actuality, the standard Glenfiddich 12 Year Old is a tasty dram that I think is accessible to both regular drinkers and single malt newbies, especially if you like your drink a little sweet.  The only strike I’d have against it is the rather short and uninteresting aftertaste.  Basically, it hardly has one at all.  However, its super easy to get a hold of and pretty cheap.  What’s not to like about a drink thats bringing single malt to the masses?

All right, all right, you got me.  Admittedly, I have an ulterior motive for reviewing the Glenfiddich 12 Year old so soon.  Why would I review the most common whisky in my liquor cabinet before I’ve gotten around to writing about a Yamazaki, a Lagavulin or a Laphroiag?  Well its been a long time since I had a taste of the Glenfiddich 12 Year Old and I wanted to have a basis for comparison for when I get around to reviewing this bad boy I picked up over the weekend.  Thats right, its 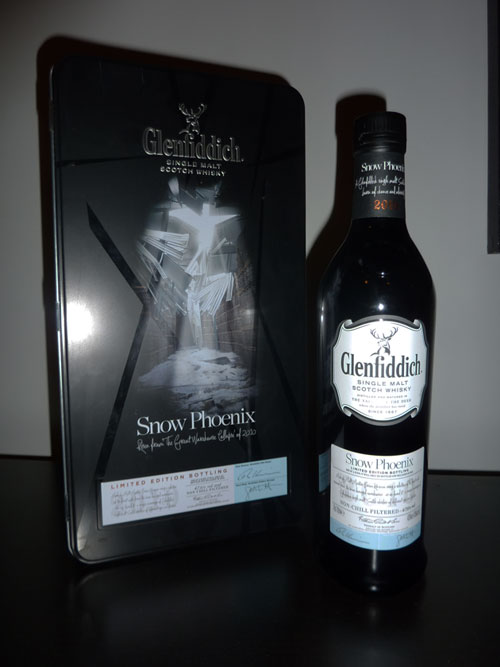 “Born out of months of heavy snow during Christmas 2009 when four distillery rooves collapsed. This whisky is a tribute to those who rescued many oak casks from winters bitter cold. Snow Phoenix was created by marrying together natural strength and non-chill filtered casks of different ages and finishes, including American oak and Oloroso Sherry. The result is a single malt, gold in colour with bright copper highlights. A must for any whisky connoisseur or collector.”

I’m looking for just the right special occasion to bust open this sweet baby.  I can hardly wait.