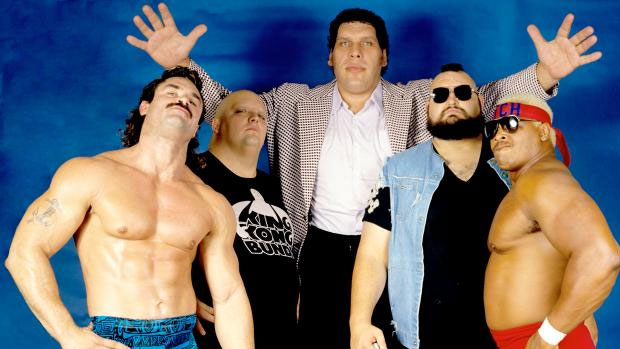 The Survivor Series is WWE’s second oldest pay per view show and this Monday, the 28th (!) instalment of the annual event takes place at Philips Arena in Atlanta, Georgia.

The show was originally created by Vince McMahon to run directly against competitor WCW’s Starrcade with the then-WWF CEO strong-arming cable providers into choosing to run one event or the other.

To give the Survivor Series a unique hook, each match on the card would be comprised of multi-man teams (originally teams of five) who would compete against one another with single elimination rules.  This meant that conceivably a match could deliver situations such as 2 vs 4, 3 vs 3 or even 5 vs 1.  It was a great concept and although WWE would gradually dilute the card with more traditional matches, they still have a fine catalogue of traditional Survivor Series matches that fans can enjoy on the Network.  What I would give for the company to return to having entire cards made up of classic Survivor Series elimination matches.

Anyway, this is my pick of my ten favourite traditional Survivor Series matches.  I’m grading these matches not just on match quality but also on star power, crowd reactions and memorable moments. 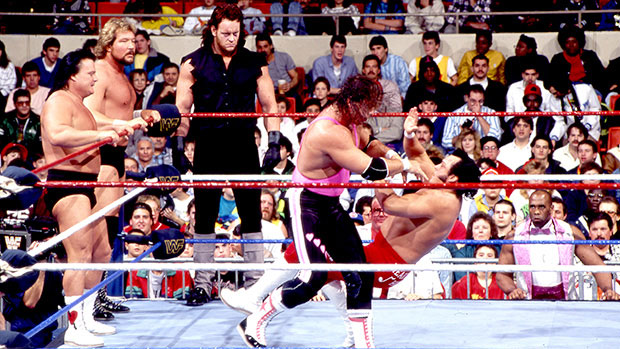 “Look at the size of that ham hock!” – Rowdy Roddy Piper

Survivor Series 1990 will forever be remembered for the WWF debut of wrestling icon The Undertaker.  He was introduced as the mystery partner for Ted Dibiase’s Million Dollar Team and he proceeded to make short work of Dusty Rhode’s hapless Dream Team, delivering his first ever tombstone piledriver upon an unsuspecting Koko B Ware.  Taker would eventually get counted out however leaving Bret Hart against the rest of Dibiase’s team.  After battling his way from 3-1 down to squaring off against just Dibiase, the two wrestlers would go on to put on a fun little wrestling clinic, exchanging holds and counter holds before Dibiase would eventually squeak out a victory by rolling through a cross body block and grabbing a handful of tights.  A perfect midcard Survivor Series match that made the Undertaker look like a star on debut and contributed nicely to the build up of Bret Hart as a singles wrestler. 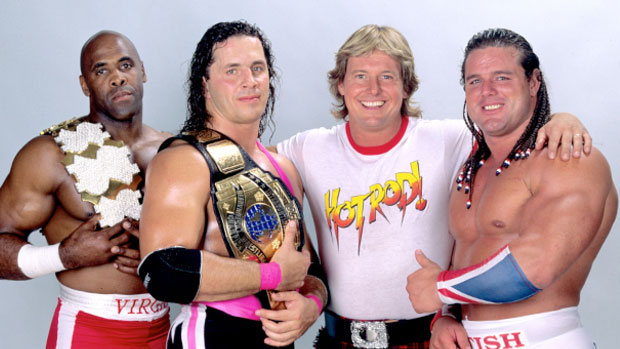 This particular match up at Survivor Series 1991 featured some of the world’s most talented wrestlers of any generation as well as The Warlord and Virgil.  I ummed and erred as to whether to include this match on the list or not.  For the first twenty minutes, its something really special as the talented workers on both sides really put on a fantastic match in front of a red hot crowd.  Unfortunately it ends incredibly abruptly as the contest breaks down into an all out brawl.  With Ric Flair on the outside of the ring, everyone else in the contest was disqualified, leaving the Nature Boy the sole survivor.  The ending is very disappointing but everything else about this match is solid gold. 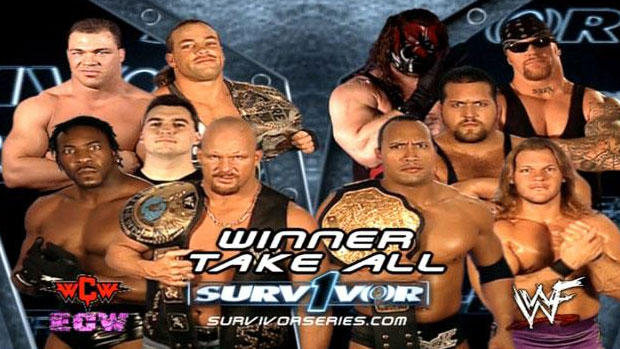 Probably the most star studded Survivor Series match ever put together delivered an emphatic and exciting conclusion to the otherwise completely terrible ‘WCW Invasion’ angle of 2001.  As you can tell from the line up, there were plenty of noteworthy WCW wrestlers on the WWF team and vice versa as an insecure Vince McMahon booked the match to feature exclusively WWF talent in the Final Four.  Still, when it comes to an entertaining in-ring product, its hard to go past this match which had The Rock and Austin in their prime, up and coming talent in Jericho, Angle and RVD all making their mark and Booker T mostly getting buried but at least he got a spin-a-roonie in there.

It’s a fun match made even more entertaining thanks to Paul Heyman on commentary giving Jim Ross a torrid time. 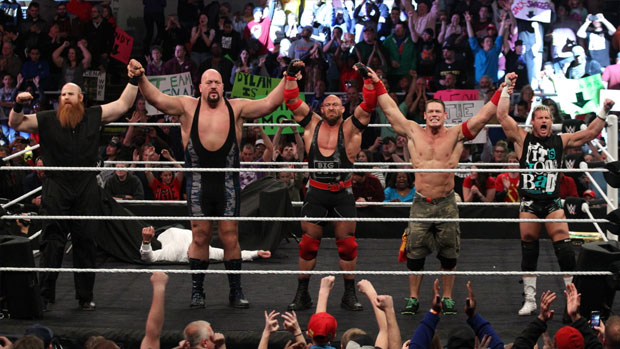 Probably one of the most entertaining Vince Russo style matches featuring heel turns, overbooked storyline melodrama and run-ins actually took place in 2014 when Team Cena took on Team Authority with a stipulation that stated if the Authority lost, they would have to disband.

Fans were left unsure as to how the match would unfold midway through when Big Show turned on John Cena, knocking him out and allowing Seth Rollins to get the pin.  Big Show walked out leaving Dolph Ziggler against three opponents.  Ziggler gradually fought his way back into the contest but finally appeared conquered when Triple H delivered a pedigree.  But a long awaited debut entrance from Sting evened the odds and Ziggler completed his improbable comeback and won the match.

In retrospect, we found out that the Authority would be off TV for less than two months and both Ziggler and Sting would go on to be misused terribly by the WWE so this match is best enjoyed in complete isolation. 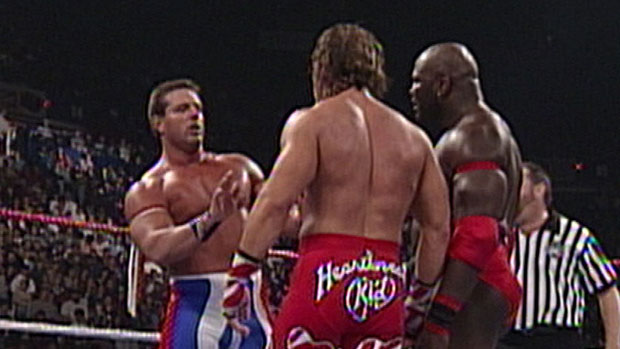 One of the most entertaining ways to book a Survivor Series match is to force heels and faces to work together.  It’s become quite common in recent WWE history with several ‘brand’ themed matches pitting Raw wrestlers vs Smackdown wrestlers utilizing this dynamic.  The first instance I can recall however was the ‘Wildcard’ match in 1995 which saw the likes of babyfaces Shawn Michaels and Ahmed Johnson teaming with heels Sycho Sid and British Bulldog.  This match had plenty of great and charismatic workers who put on an entertaining match and both teams really made the most of the uneasy alliance dynamics at play. 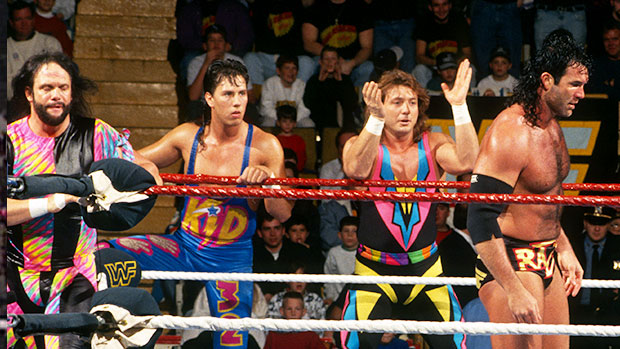 When I put this list together and compared it with other Top Ten Survivor Series lists online, I quickly found out that for most wrestling fans their favourite underdog match is the 1995 encounter between the Body Donnas and the Underdogs.  For me, I prefer this lesser known match from 1993.  Razor Ramon and Randy Savage are clearly the bigger stars of their team and IRS’ side features future world champion Diesel in their ranks.  And yet the match turns expectations on their head as Diesel, Savage and Razor are amongst the first eliminated leaving Marty Jannetty and 123 Kid to face off against the much fancied Rick Martel and Adam Bomb.

Marty Jannetty and 123 Kid are the stars of this match and the later in particularly does a great job transitioning from being a human punching bag getting tossed around by the giants on the opposing team to working an entertaining match with the more technically accomplished Rick Martel.  Waltman would go on to find greater success as X-Pac but I think this was some of his best work. 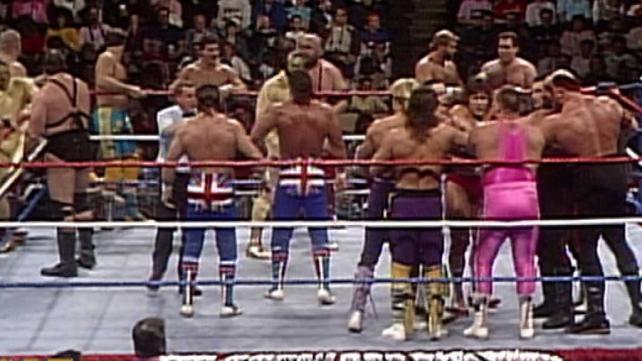 4.  The Powers of Pain, The British Bulldogs, The Rockers, The Hart Foundation & The Young Stallions vs. Demolition, The Brain Busters, The Fabulous Rougeaus, The Bolsheviks & The Conquistadors

I’m pretty comfortable in saying that pro wrestling will never again attain the same level of depth in their tag team roster as they did in the mid Eighties.  This match has legendary tag teams spanning both sides and its incredible to think that even outside of the WWF at the time there was the Rock N Roll Express, the Midnight Express, the Road Warriors, the Freebird and the Von Erichs all plying their trade.  Anyway, back to the match.

For the first two years of Survivor Series, we were treated to the spectacle of these outrageous ten man tag team contests.  Both years are pretty goddamn great with the tag team match running forty minutes plus, giving plenty of wrestlers a platform to show off their talent.  The ’88 edition is probably a slight favourite for me thanks to the participants involved but both are worth watching.

The ’88 tag match was notable for the strange duration in which perennial jobbers The Conquistadors last as well as the double turn at the very end as Mr Fuji turns on Demolition and joins The Powers of Pain.  The crowd were mostly confused by what went down at the end but who cares?  It’s still an awesome match whichever way you slice it. 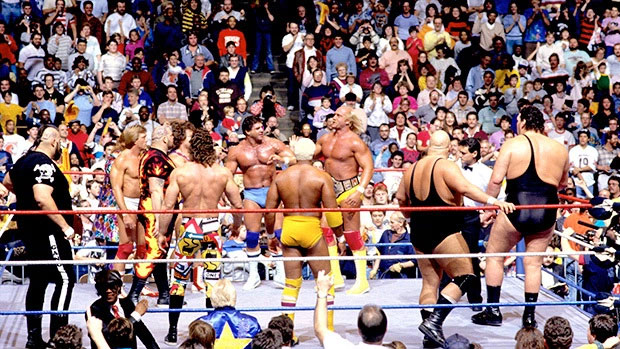 The first ever Survivor Series main event was a hotly anticipated rematch between Hogan and Andre since their encounter at Wrestlemania III.  Hogan’s team is comprised of a couple of wrestlers better recognized as heels (Don Muraco and Paul Orndorff) whereas Andre just stacks his team with giants.  Jessie Ventura on commentary claims the team weighs a literal tonne and you’d imagine they wouldn’t be far off it.

The crowd are made to wait a long time for their eventual interaction between Hogan and Andre and once it happens, they’re in for a shock.  Hogan is drawn to the outside of the ring and counted out, leaving Andre, King Kong Bundy and One Man Gang against Bam Bam Bigelow.  Bam Bam fights valiantly but is eventually bested by Andre allowing the giant to get a rare win over Hogan.  Of course Hogan rushes back and clears the ring so he can end the show posing to the crowd because thats the kind of guy he is.

When it comes to spectacle and big name wrestlers, it’s hard to go past the first ever main event of Survivor Series. 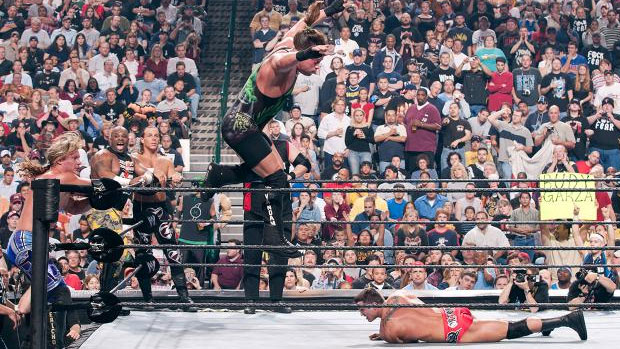 One of the greatest workers of the modern era is Shawn Michaels and after he made his successful return to wrestling at Summerslam 2002, he would go on to have one of his best classic Survivor Series matches a year later when he was involved in the Team Austin vs Team Bischoff match.  Austin’s team is dismantled by Team Bischoff leaving HBK in a 3 on 1 situation.  He claws his way back to one on one with a young, upstart heel Randy Orton who just manages to steal the win.  The match is a great showcase for the underdog formula at play and the match is entertaining throughout thanks to its entertaining cast of characters involved such as the Chris Jericho and Scott Steiner. 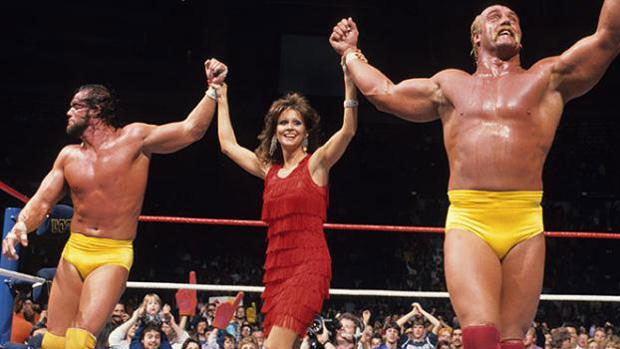 It might surprise people to see this particular match at the top of the list but when it comes down to it, I’m a huge Randy Savage and Big Boss Man mark and this match is a terrific showcase of both guys doing what they do best.  Savage – as a vulnerable babyface who will do anything for Miss Elizabeth – and Boss Man – as a dick heel who cheats blatantly and handcuffs Hogan to gain an advantage.  This match is a very classic white meat babyface versus dastardly heel affair but it takes place at the height of the Rock N Wrestling era with some of the generation’s best loved characters.  I pretty much love all the wrestlers involved in this match (Red Rooster and Koko B Ware in the main event!!!) and this is a perfectly booked match up from start to finish.