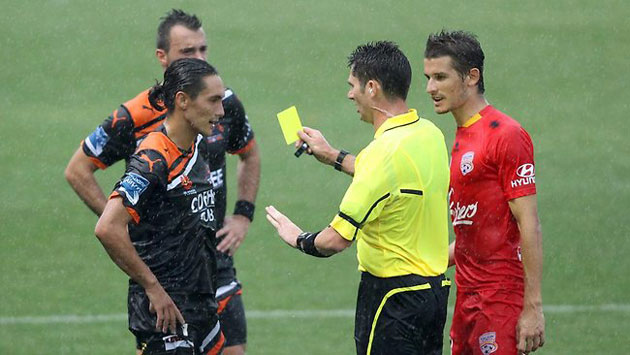 Brisbane Roar played Adelaide United at Hindmarsh Stadium in Round 16.  Their first encounter since Brisbane thrashed Adelaide 7-1 at home.  But this was different.  We are no longer the high flying Brisbane team with an undefeated streak and Adelaide United have re-invented themselves under new coach John Kosmina.  In fact, they are now unbeaten in five games.  A rare run of form that eluded them at the start of the season when they reported to Rini Coolen.

After Round 15’s miserable form against Perth Glory, it was a mystery as to which Brisbane side would turn up.  Would it be the all conquering defending champions or the aimless bush-league players that lost five on the trot?

It didn’t take long to find out.  Brisbane dominated from the outset and completely shut Adelaide out of the game.  At times, the possession stats were close to 80%.  Adelaide were simply starved of the ball and were given few chances.  Brisbane on the other hand looked dangerous.  Only referee Ben Williams appeared to have the chance to upset the balance.  He inexplicably waved play on when Rocky Visconte was brought down in the box for what looked a clear penalty.

Early in the second half, Brisbane’s dominance finally paid off and Issey Nakajima Farran drilled in a goal to give the Roar the lead.  The Roar didn’t sit back but continued to press forward with confidence.

Then, in the 78th minute, Brisbane captain Matt Smith stumbled over his own feet in the penalty area and former Brisbane striker Sergio ‘Squidward’ Van Dijk fell in a heap on top of Smith.  Ben Williams blew the whistle for a penalty which Van Dijk duly converted.  1-1.  And it stayed that way to the full time whistle.  Meanwhile Central Coast Mariners beat Sydney 1-0 to stretch their lead at the top of the table to 8 points with a game in hand.  They appear out of reach.

Although we’ve recovered from our form slump, I feel like Brisbane isn’t getting the rub of the green at the moment.  Three penalty decisions in five weeks haven’t gone our way, Central Coast don’t look like dropping any points and are running away with the minor premiereship.  We need something to our form around and secure some back to back wins.

Next week we play Sydney FC, the team that ended our streak.  The game will be notable for the long awaited return of the talismanic Thomas Broich.

Previous: A-League 2011/12 – Round 15 – Was it a win or was it Victory?
Next: TV Show Round Up: House of Lies, The Layover, The Walking Dead Season Two, Black Mirror, Homeland Season One Finale, Survivor Season 23 Finale, Life’s Too Short