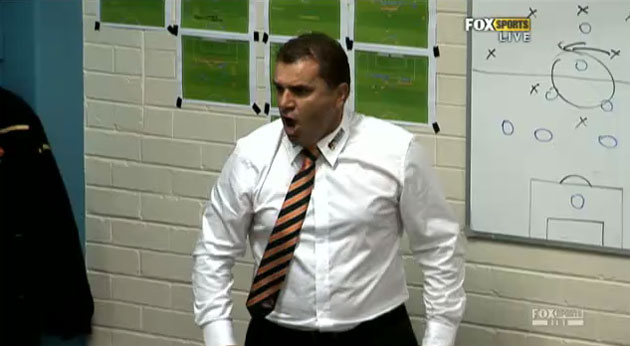 It turned into more than just a suspicion during Round 15, the ‘Big Wednesday’ round, during which the A-League played all five matches in a row for twelve consecutive hours of football.  It was a high scoring round in which there was an average of five goals a game and the only team that didn’t score was Melbourne Victory.  Their two nil defeat to Central Coast Mariners was too much for the MVFC board who sacked their coach Mehmet Durakovic soon after.

Brisbane travelled away to Perth Glory, a team that has been playing like crap since Round 3 and are near the foot of the table.

Within twenty minutes it was 2-0 to the Glory.  Brisbane looked lethargic, wasteful and made simple errors turning over possession.  The worst of the bunch was Matt Jurman of course but the rest of the team were not much better.  With about five minutes to go till half time, the Roar suddenly clicked and fired in two goals.  Not only that, they made it look easy.  In the second half, they weathered an early storm and then Mitch Nichols scored his second of the game.  3-2.  It was incredible.

They then went on to play rubbish for the rest of the game.  A dubious penalty at the end of the game allowed Perth Glory to sneak away with a 3-3 draw.  After fulltime, Ange Postecoglou labelled his team’s performance as ‘absolute garbage’ and ‘cowardly’.  Footage of Ange going absolutely ballistic at his side at halftime did the rounds on the Fox Football magazine shows and it became a talking point during the week.  Was he right to go off like that?

Whether you question the delivery of the message or not, its clear that Brisbane still aren’t the team they used to be.  Seven games in a row now they have conceded the first goal.  Although they have snapped their goal-scoring drought and scored six goals in two games, they have also conceded four goals against some of the worst teams in the league.

The draw saw Brisbane regain second place on the ladder after Melbourne Heart unexpectedly lost 3-0 at home to Adelaide United.  But the draw insead of a win means that Central Coast are now six points ahead at the top of the table with a game in hand.  They will be hard to catch in the race for the minor premiereship.

Next up for Brisbane – an away game against a newly rejuvenated Adelaide United who have been unbeaten in 3 games since bringing in new coach John Kolossima.

There is still no return date for injured stars Thomas Broich, Henrique and James Meyer :/ 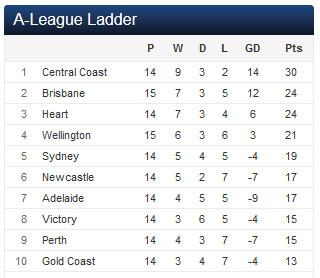