4: Rise of the Silver Surfer 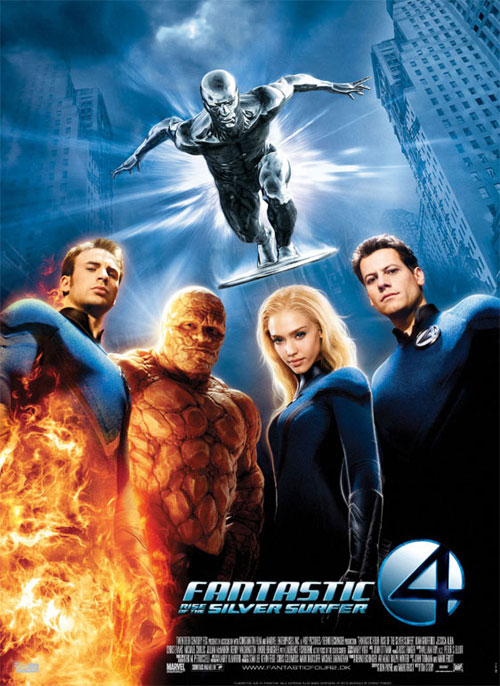 In the far reaches of space, the planet-eating entity known as Galactus makes his way towards Earth so that he may consume all forms of life.  Scouting each of these planets for him is The Silver Surfer, who has made a pact with Galactus to spare his home planet in exchange for acting as his herald.

On Earth, the leader of the superhero group The Fanastic Four, Reed Richards, is considering married life and retiring from crime-fighting.  When The Silver Surfer shows up and spoils his wedding, he finds he will have to unite the Fantastic Four at least one more time to save the Earth from Galactus.

Rise of the Silver Surfer, like the original Fantastic Four film, is notable for being a more light-hearted entry amongst the catalogue of Marvel film adaptations.  It is well served by this as its unique tone sets it apart from a dozen other poe-faced superhero flicks.

There is a great dynamic between the heroes and this film is at its strongest when the various characters are bickering amongst themselves like a dysfunctional family.  I especially like Johnny Storm’s shameless profiteering and the NASCAR-style costumes he wears which are covered in corporate sponsors.  Just as in the comic books, his constant ribbing of Ben Grimm, The Thing, are highlights of the show.

Frankly, I can only see die hard fans of The Silver Surfer coming away disappointed here.  The film is fast paced, theres a new Fantastic Four plane that looks like a neat toy and the good guys save the day.

The only scene which raised an eyebrow for me was the moment Silver Surfer actually turns on Galactus.  As in the comics, the Surfer is a rather cold and aloof character who speaks in philosophical tones about his enslavement and duty to find planets for Galactus to eat.  So it comes as something of a surprise when Jessica Alba manages to convince The Silver Surfer to go against centuries of doing his duty and sparing Earth by basically saying ‘come on guy, give us a chance’.

It’s not Gone With the Wind, but there’s a servicable super hero film here.  I wouldn’t mind if they made another installment but after defeating a planet-eating alien, I’m not really sure where else you go from there.

4: Rise of the Silver Surfer

That guy on the left didn’t really amount to much

Summary : Way better than I'd expect a second Fantastic Four film to be. It's fast paced, sparingly funny and completely fine for what it is.

Previous: Transformers
Next: The Simpsons Movie