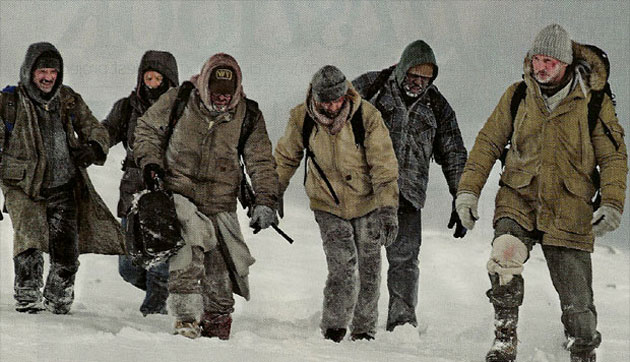 The Grey is a film starring Liam Neeson and is directed by Joe Carnahan who brought us The A-Team movie.  The trailer makes this look like an action movie where you might expect to see Neeson doling out some Irish justice and punching some wolves.  Thankfully, its nothing like that.

Alternatively, you might be tempted to draw a comparison to Alive, the Uruguayian rugby movie about plane crash survivors stuck in the Andes.  Only The Grey is not really a survival film either.

Neeson plays Ottway, a huntsman for hire who finds work at an oil rig in Alaska.  When travelling to the site, the plane goes down and crashes in the middle of a blizzard.  Ottway and a handful of others survive the crash.  They quickly find out that they are not alone however and that there is a pack of wolves who have found a taste for human blood and begin stalking them.

When done right, wolves can be absolutely terrifying.  Just ask anyone who saw The Never Ending Story as a kid.  I have never seem wolves portrayed in a more unsettling and ferocious fashion than in The Grey.  Carnahan shows the wolves to be a hive mind when attacking, single minded in their purpose.  The wolves are brutal, terrifying and shown in such a way that the final strike is left to your imagination.

Ottway has some experience in hunting wolves but he is no superman.  He leads the crew away from the wreckage and they attempt to lose the wolves in the woods.  In the thick of the snow storm, they face the horror of both the elements and the wolfpack.  They are hopelessly unprepared for what faces them and have few tools to aid their survival.  They bicker and argue over their strategy.

Early on in the film, Ottway’s narration describes the rig as being populated by society’s outcasts and people with little reason to live.  Who else would take such a thankless job in the middle of nowhere?  Each person has their own reasons for seeking the refuge of the far North, away from humanity.  As the wolves pick off the workers one by one, the rest of the crew begin to accept the likelihood that they will be next.  Although they survived the crash, they have effectively been sent to purgatory, with a few hours or days left to come to terms with the life they ran away from.

I won’t spoil if there are any survivors but it matters little.  At the heart of the film is the tale of a group of strangers who, in their final days, learn a little about one another and come to terms with their own life.  It is a strange zen-like twist to what is outwardly such an intense film.  Once these men find their inner peace, the onset of the wolves almost feels welcome.

Although Liam Neeson is an actor who has been around for decades, he has undergone a renaissance late in his career.  Taken made him Hollywood’s go-to tough guy and he has racked up many roles based off that performance since then.  What makes Neesen different from a Schwarznegger or a Stallone however is he is able to believably convey a sense of humanity that makes him a more relatable everyman.  In The Grey, he does some extraordinary things but ultimately, he is still convincing as a man who misses his wife terribly and almost didn’t have the courage to go on living without her.

The result is a film that offers a surprising emotional depth.  There is no sympathy from the wolves who carve through the crew like a living meat grinder but we cheer for Neeson throughout his ordeal, whatever the end may bring. 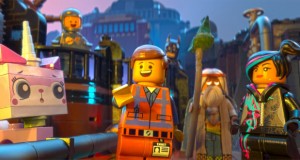