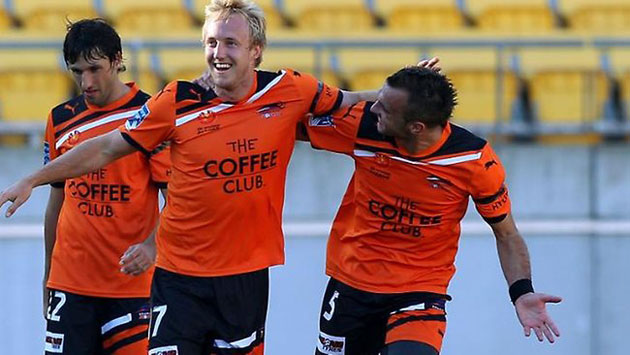 Brisbane Roar travelled to Wellington on Sunday for a battle between second and third.  The Phoenix shot to second place in the table after a club-record run of form where they won three away games on the trot.  As with the previous two encounters between these sides, Ricky Herbet opted to sit very deep in defence and play on the counter.  It worked twice already this season.  In Round 6 the Nix drew 1-1 with the Roar at Suncorp despite the Roar having a million chances which they couldn’t put away.  The same strategy then yielded a win for the Phoenix when they beat the Roar 2-0 in Dunedin.  That was when they were without Thomas Broich and still thought Matt Jurman was an acceptable defender for a professional football team.

Fast forward to Round 21 and the Roar had over 70% of the possession after half an hour of play.  A beautifully lofted ball from Erik Paartalu found Besart Berisha who fired home his 13th goal of the season.  The Phoenix rallied in the second half with a more positive approach to the game but Paul Ifill was unable to beat Michael Theoklitos when he had a pair of golden opportunities.  Mitch Nichols killed the game dead for the visitors when he scored in the 80th minute.  It seems the Roar are rediscovering their form and peaking at just the right time.  It was a weekend of perfect results for the Roar – every other team in the top five lost.  Could they possibly catch the Mariners?  For a chance at catching their rivals, they will need them to lose a third game in a row.  Next week the Central Coast Mariners are at home to Wellington. 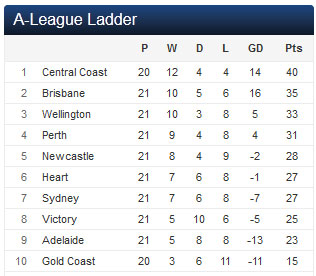 Gold Coast are on track to being labelled the worst sporting region in Australia.  If Gold Coast United finish bottom of the A-League table (they are eight points behind 9th), then the city will hold the dubious honour of finishing bottom in the AFL (Gold Coast Suns), the NRL (Gold Coast Titans) and the A-League all in the same season.  Awful.