The Brisbane Roar drew at home 1-1 to 9th placed Adelaide United on the weekend.  Meanwhile the Central Coast Mariners lost 1-0 to Perth so with 2 games remaining, they hold a slender 2 point lead at the top of the table.

But thats not important right now.

Much more interesting is Roar striker Besart Berisha honouring his promise to the fans that he would sing a song for them when he scored more than 10 goals.  He’s now up to 18, one shy of the A-League season record.  So here it is, the heavenly voice of Besart Berisha: 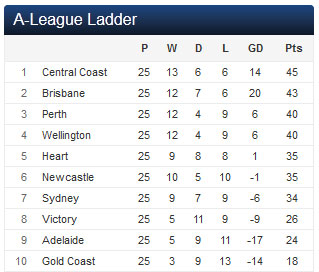