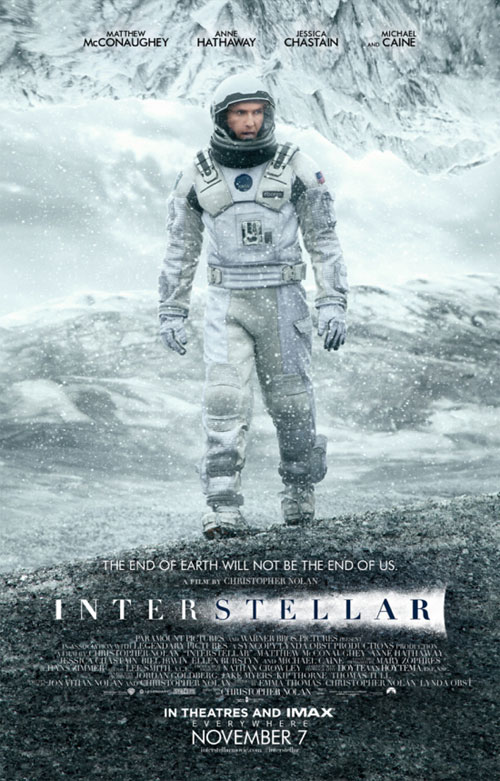 Christopher Nolan is a great ideas man.  Since he made his name with the wildly non-linear Memento, 14 years ago, he has been spoiling cinema audiences with a slew of films that have some wonderful creative hooks.  Think back to the magical mystery in The Prestige.  The mind bending dream worlds of Inception.  The eerie neo-noir thriller Insomnia set in a land where the sun doesn’t set.

His latest film Interstellar invites audiences to follow a crew of astronauts sent into space to find a new home for humans as civilization on Earth collapses into an uninhabitable dust bowl.  They journey through a wormhole following the path of 12 predecessors, and the trip will distort their connection with time and dimensions as we know them.  The film is a colossal 170 minute beast that is filled with theories about space travel, grand speeches about love and loss, and although it occasionally huffs and heaves with a clunky line or a scene that runs long, overall I can’t help but feel appreciative of Nolan’s creative endeavour.  Interstellar is a film that thinks big and reaches for the stars, literally and figuratively.

The star of the film is Matthew McConaughey who continues his rich vein of form in picking challenging and interesting projects.  He plays the role of Cooper, a family man who lives in the near future where a great famine has wiped out most of the Earth’s population and left the survivors to rebuild in a society where agriculture is king.  He lives on a farm with his father-in-law Donald and his two kids Murphy and Tom.  A series of bizarre occurences in his house lead him to discover the whereabouts of a secret NASA bunker, lead by Professor Brand (played by Michael Caine).  The Professor explains that there isn’t much time left for humans and so NASA initiated Project Lazarus – whereby 12 astronauts were sent into space to find a habitable planet on the other side of a wormhole that appeared in our solar system.  None of them returned.  With the clock ticking, a new crew must be assembled to travel through the wormhole and initiate contact with the astronauts, in case any were successful but unable to communicate their findings back to Earth.  With humans that can pilot a space craft at an absolute premium, the Professor and his daughter Amelia Brand (Anne Hathaway) convince Cooper to join the crew of the Endurance.  Cooper’s daughter Murphy is distraught at this development.  Even in the future they must play Armageddon on free-to-air television on regular rotation.  She knows how this story goes and she knows that her father is extremely unlikely to return alive. 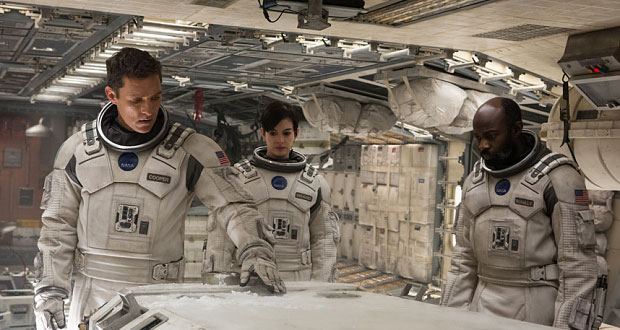 It takes Interstellar a good 40 minutes to become space-bound.  Its in that opening act that we really come to understand that the film spends a lot more time concerning itself with themes of family, parenthood, love and grieving on levels that the trailers didn’t really let on.

Once the Endurance soars into space, they almost immediately find themselves in a spot of bother.  They are slammed by a wall of exposition.  Not unlike Inception, I sometimes felt as though Interstellar was a film that was too clever by half.  Its not afraid to throw the audience head long into a time travelling, dimension-altering adventure but it comes at the cost of reducing some of its characters into narrators who are constantly bombarding the audience with information explaining the rules of the game.  It’s always better to show, rather than tell, and in this case, Nolan hasn’t really found an elegant solution.

Still, once we understand that there are three potentially habitable planets to choose from and that time on these planets passes exponentially quicker than it does on Earth, the film clicks into another gear and finds its feet again.  Each planet the astronauts travel to has its own secrets and I appreciated the efforts that Nolan and his production team went to to keep secret some of the developments in the middle portion of the film.  Events occur that aren’t even hinted at in the previews and its a genuine pleasure to watch a big screen feature such as this and experience a surprise you weren’t expecting.

There is a lot to like about Interstellar.  I don’t think its a predictable film and its narrative scope is so expansive its difficult to tell how the film will end.  McConaughey is an excellent lead but he is also ably supported by a strong cast including Anne Hathaway and Jessica Chastain who I both enjoyed immensely.  Initially, I was puzzled by the curious looking design of the robot TARS but over the course of the film I became a fan.  TARS is dry, funny and moves like no robot I can remember seeing.

I think the film’s final act will prove to be divisive.  It transports the film well and truly into the realm of the abstract, unashamedly embracing emotional melodrama and mixing it with wild scientific theory (which I couldn’t begin to tell you if it was representing itself accurately in the slightest).  For me, I was able to suspend disbelief and go along with it.  For others, it may be the moment that Interstellar loses them.

Talking to people after watching the film, I’ve come to realize that Interstellar has a number of plot holes and unexplained character motivations that don’t really stand up to scrutiny.  To hell with them.  Interstellar is a big ideas film and its best enjoyed discussing the broader themes (the love for individuals vs the love for humanity, the human condition, nature vs mankind etc) rather than picking apart the minutiae which unravels pretty quickly if you let it.  I’ve heard some uncharitable comments that suggest that the film isn’t perhaps as clever as it thinks it is but I find that whatever the film’s shortcomings, I will always cast an optimistic and appreciative eye on a work that shows this level of creativity, personality and ambition.  Once again, Nolan has delivered the goods.

Summary : A film filled with ideas about space, time travel and the human condition. Its got plenty of jargon and theorizing but a focus on family bonding ultimately gives Interstellar plenty of heart.

Previous: The Hunger Games: Mockingjay – Part One
Next: Fury