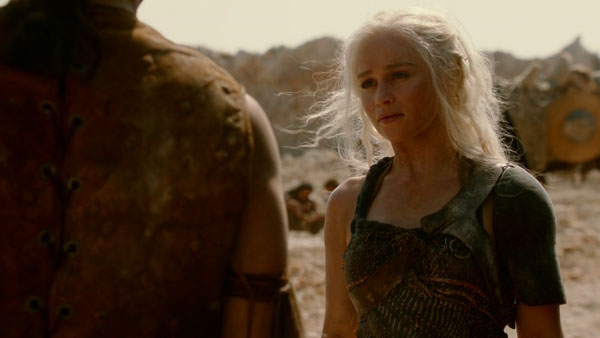 Khaleesi - hasn't showered since Season One

Game of Thrones Season Two – Episode One – “The North Remembers”

It was with great anticipation that I sat down to watch the return of Game of Thrones, one of my favourite new shows of 2011.  Its a minor miracle but I’ve managed to avoid reading any spoilers on Twitter or via a messageboard which made me very happy.  I also steered clear of the preview trailers so I could enjoy the whole season without even the slightest idea of what to expect, such is my eagerness to absorb this show unspoiled.  The nature of the first season set the tone – no character is considered safe and everyone is expendable.

The North Remembers was a slow burn episode.  As one might expect, it simply sets the tone for the season ahead.  Joffrey is still trying to consolidate his newfound power and is eager to push the envelope with his power as King.  He pushes it a little too far with his mum Cersei who slapped the taste out of his mouth when he mocked the sexual disfunction in her marriage.  It’s probably not really an area he should be discussing anyways.

Meanwhile, the Starks continued to consolidate their armies in the North in preperation for a showdown with Joffrey.  War is not a foregone conclusion but diplomacy looks rather futile at the moment.  It’s been building since the first season and a question I think a lot of people considered (well, those that haven’t read the books) is that if war breaks, does HBO have the budget to do it justice?  So far, they’ve done a nice job covering for mass conflict so far but surely there will come a time when the script either calls for an invasion of ice zombies or a Return of the King style battle between the army at King’s Landing and the Northern alliance?  For what its worth, this episode did still have some lavish production values.  There were plenty of different locations and even Daenerys’ pet dragon has pretty good CGI.  Hopefully when the time comes for a major military conflict, the producers can deliver the goods.

This episode delivered political subterfuge, armies amassing and a bit of boobage.  It certainly delivered the quintissential Game of Thrones experience!  For now, it looks like the hunt is on to find Arya Stark, one of the most valuable political pawns in Westeros. 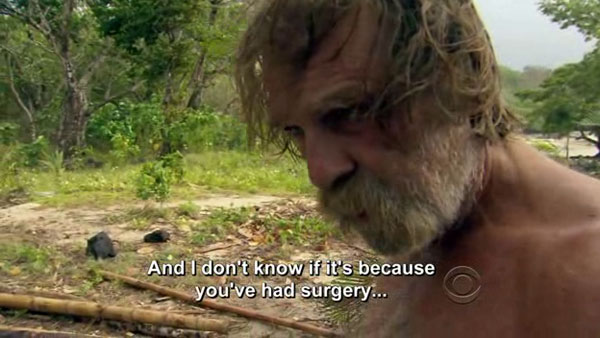 “Some people hate their plastic surgeon,” explained Tarzan to Chelsea, “Is that why you have a problem with me?  Because of your breast implants?”

Survivor certainly has a knack for finding some strange, strange contestants.

This season had a red hot start with controversial contestant Colton influencing his team of men to purposefully vote out one of their own tribemates despite winning the immunity challenge.  Part of the reason was because he was poor and a slightly less clear second reason may have been because the guy was black.  It wasn’t pretty.

Since then, Colton himself exited the game in a rather ignoble fashion, getting appendicitis and leaving on medical grounds.  The game underwent a disastrous tribe reshuffle where all the athletic people ended up on the same team and who subsequently won every challenge.  After it became clear that a whitewash was on the cards, the game hastily jumped to the merge which is where we find ourselves now.

Interestingly, no one has really grabbed this game by the scruff of the neck.  There are plenty of pawns who are willing to form an alliance (Tarzan, Lief, Christina, Alicia are all free agents) and the king makers are yet to lock in their decisions.  For the past few weeks Troyzan appeared to be getting a favourable edit as a keen Survivor strategist but his goal of forming a strong male alliance was easily ripped to shreds by Kim who simply made up a lie that Mike was looking to vote him out.  Troyzan took the bait and the focus on getting a male alliance together crumbled.  Male model Jay appears to see the writing on the wall for the men but he doesn’t appear to have the influential personality to bring the men together or win over any of the women.  His only hope seems to lie with success as immunity challenges.

It’s going to be an unpredictable finish to this season but right now, Kim appears to be in the driver’s seat.  She has a hidden immunity idol and seems to have solid alliances and a good read of the game.  Can she execute the gameplan and choose the right people to take with her to the finish? 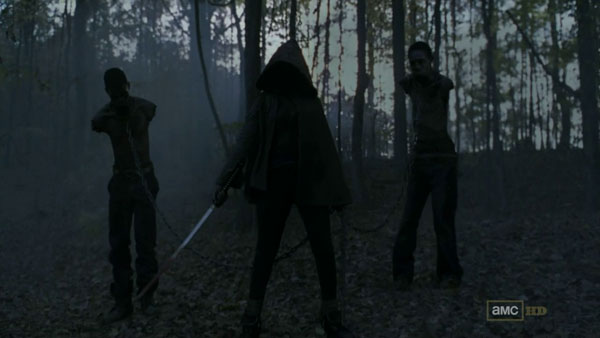 The Walking Dead Season Two – Episode 13 – Beside The Dying Fire

With the Easter break, I finally had a chance to catch up on the rest of The Walking Dead Season Two.  I’ve blogged before about my frustrations with the show in general and the rather lacadaisical pacing to the start of Season Two.  Happily, I feel like this show has finally begun to hit its stride and it finished strongly with the last three episodes aproviding compelling, high intensity viewing.

After what felt like an eternity searching for Sophia on the farm, the second half of the season focused on the group wrestling with the ethical dilemma of what to do with a captured teenager from another group of survivors.  If they let him go, they risk the chance that he will bring others back with him to take over the farm.  But Shane’s suggestion that they execute him threatens the humanity that the group are desperately trying to cling to.

The last three episodes all killed off major characters but did so in a fashion that didn’t feel cheap or unnecessary.  They were all appropriate to move the story forward and felt like a natural progression for the show.  Which is great because in the first season, I felt the show lacked a sense of long term direction and proper character development.  In this season, we are given much more reason to care about the wider cast of characters and as a result, one of the deaths in particular will likely draw quite an emotional response from the viewers.

As a big fan of the comic book series, I was thrilled with the introduction of the katana wielding Michonne at the end of the final episode.  Have they announced who will be acting her part?

The good news is that not only did the show find its form at the end of this season, there were plenty of people around to see it happen.  The final episode garnered a record audience for AMC.  This promises a bright future for the show which I couldn’t be happier about.  If Season Three goes anywhere near what happens in Books 7-9 of the comics, we’re in for one hell of a ride.

Tagged with: Game of Thrones Survivor Survivor One World The Walking Dead