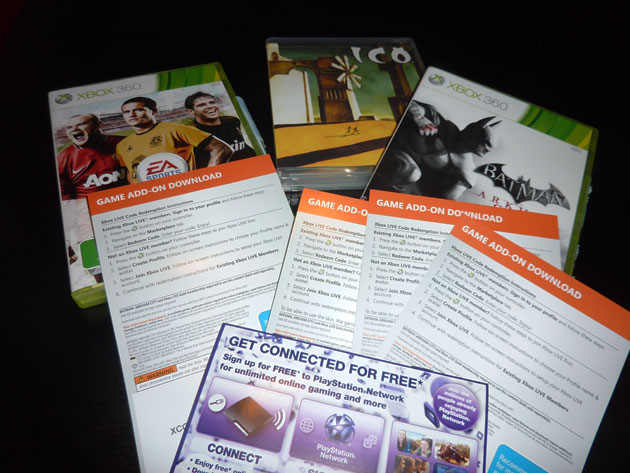 It’s that time of year!  The annual video game drought where there is a barren wasteland of new releases from January to September is over.  Now we’re in that heavily congested fourth quarter of the year where all the good games come out all at once.  Other than blowing a massive hole in your wallet and causing you to become a social recluse for 3 months, its a great time for gamers.

I’ve already been busy playing Gears of War 3, Ico & Shadow of the Colossus HD and FIFA 12 in the last few weeks.  Today I was pleasantly surprised to discover that Australian retailers had broken the street date and released the highly anticipated Batman: Arkham City a couple of days early.  I bought the game earlier today and looked forward to playing it this evening after dinner.

When I opened the game package, four sleeves of paper fell out.  It was like opening a TIME magazine where they have all those fold out sections for subscriptions and crap.  It turns out that Batman: Arkham City has four different 25 character long ‘activation codes’ to unlock content in the game including various levels, major characters (Robin, Catwoman) and alternate outfits for Batman.  After patiently inputting each code to unlock the content, I was eventually presented with this screen: 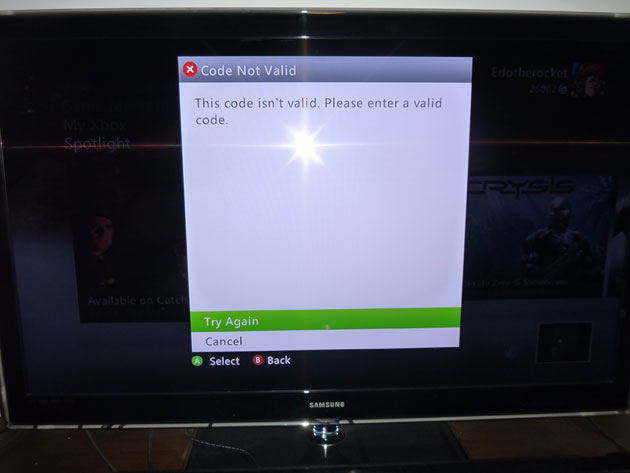 One of the codes didn’t work.  I tried multiple times and it definitely is a dud.  I checked the manual to find a support number or website.  There isn’t one.  Looks like no Robin for me.

Unfortunately, this lousy experience hasn’t been limited to Batman.  Far from it.  It’s been a consistent part of every single game I have bought in the last six weeks.  FIFA 12 takes about two minutes to fully load the game because it always has to try and connect to “EA Servers” for who the hells knows what.  I think its some sort of thing to check that I havent pirated the game or something.  Whatever it does, it takes forever.  The connection to the EA Server also frequently times out and this means that experience points that you register in-game which goes towards unlocking items doesn’t tally up properly because the connection is broken.  When I bought Ico & Shadow of the Colossus HD, I expected to watch some documentary footage of the producers discussing the games and some preview footage of their next release.  Not unreasonable since these features are advertised on the packaging.  It turns out I have to use another download code and even better, the download wasn’t ready for the launch of the game but was only available a whole two weeks later.

WHAT THE HELL KIND OF EXPERIENCE IS THIS?  WHY IS EVERY SINGLE PUBLISHER SHITTING UP THEIR GAME WITH THIS?  Can you imagine buying a DVD and having to unlock a code two weeks later to get the scenes with a particular character.  Why do video game companies think this acceptable?

From what I understand, it is supposed to be a deterent to piracy and the second hand video game market but as usual, I expect it will have zero impact on them and only inconvenience and frustrate people who buy the games new and legally.

Now that I’ve finished bitching on the Internet, I’m going to go back to playing my game.  Because underneath all the bullshit, it seems that Batman is actually a pretty sweet game.