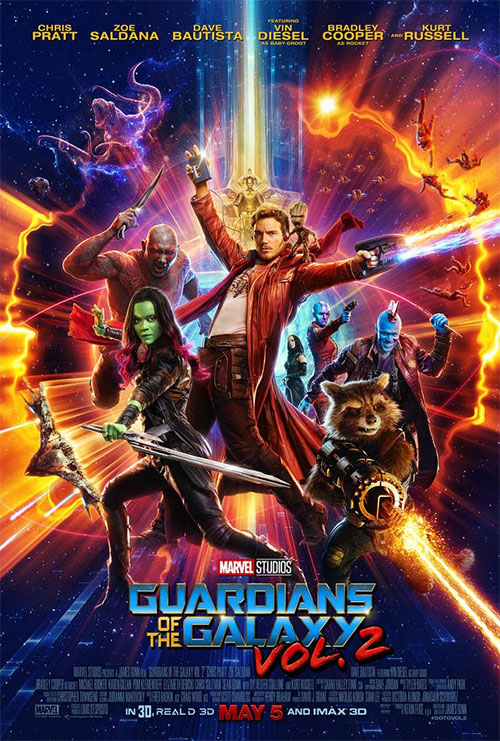 Although I personally haven’t seen the Twilight series, I’ll always remember the observation made by BBC critic Mark Kermode that during the fourth film, in a scene where one of the characters gives birth to a werewolf monster-baby in gruesome fashion, he had a revelation that this series had somehow taken a scene that looked like it was ripped straight out of a David Lynch film and turned it into something that was wildly mainstream and particularly popular with a teen audience.  And for that, he admired Twilight‘s endeavours.

I feel kind of the same way about Guardians of the Galaxy: Vol 2.

The original film was an unexpected hit because no one really thought they could make a box office success out of a super hero cast that included Chris Pratt, Zoe Saldana, a raccoon, a tree and a shouty pro wrestler.  But somehow, they did it.  The same group of misfits return once more but this time, director and writer James Gunn is even bolder and even more comfortable with embracing the wild and bizarre universe that these characters exist in.

This is a film that features a sentient planet, an ’empathic’ alien that can read people’s inner emotions and involves multi-dimensional space travel that distorts people’s faces and makes them bug-eyed like a Looney Tunes cartoon.  Even when there are scenes that follow familiar action movie tropes, like a set piece involving the good guys busting out of a prison spaceship, what you’re actually watching is a tiny tree sapling, an armed raccoon and a blue humanoid who is newly empowered because he has a detachable red mohawk rigged on his cranium.  It’s like someone was given $200 million dollars to adapt a science fiction story written for Fangoria and somehow they made it into a show that has a mainstream audience.  Personally, I don’t love Guardians of the Galaxy but I admire what James Gunn has created.  People hated on last year’s Suicide Squad because it felt blatantly like a super hero ensemble designed by committee.  By comparison, Guardians of the Galaxy is admirably free spirited and imaginative fare. 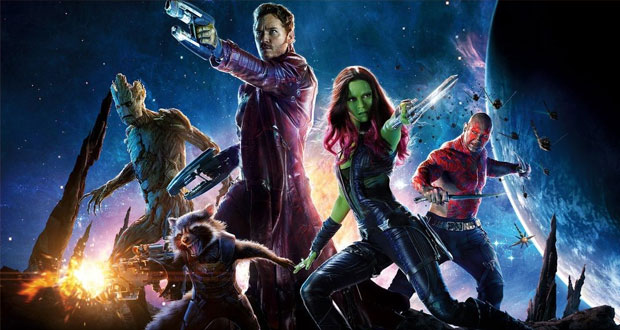 In Vol 2, the Guardians are on the run from the Sovereigns, a race of golden skinned aliens who become irate after Rocket (the raccoon) robs them of their fuel cells.  During an intergalactic shootout, the Guardians are saved by a man who reveals himself to be Peter Quill’s long lost father Ego.  Not only that, Ego is a celestial which means, in his own words, that he’s a god with a little ‘g’ and he is blessed with almighty powers.  Powers that he wishes to share and teach to Quill.

Other complexities in the galaxy include Gamora’s estranged sister Nebula being transported on the Guardian’s ship The Milano, who seems likely to break free any minute.  Elsewhere, Starlord’s mentor Yondu is struggling to contain a mutiny within the ranks of his gang as well as cope with his recent excommunication from the ranks of the Ravagers for the crime of child trafficking.

It might all sound a bit strange and convoluted but its all a good excuse to spin a wild yarn that involves plenty of adventure, space warfare and thankfully, lots more of the biting humour that made the original film such a hit.

As with Vol 1, my favourite character in Guardians of the Galaxy is the cheerfully brash and literal minded Drax the Destroyer, played by pro wrestler Dave Bautista.  Bautista plays the part with such gusto that he steals every scene he’s in and if the film feels like it has a sluggish second act, its probably because he disappears off-screen for a good twenty minutes.

The new supporting cast members in Vol 2 are a welcome addition.  Kurt Russell looks like he’s having a lot of fun as the supreme being Ego and Pom Klementieff is a wonderful foil for Drax as the sweet-natured Mantis.

What else is there to say?  The soundtrack is every bit as good as the original.  The movie is about half an hour longer than it probably should be but that’s generally the case with most Marvel films.  It’s a big, loud colourful sci-fi b-movie with a big budget.  That’s a pretty good night at the movies if you ask me.

Starlord, the leader of the Guardians, is reunited with his long lost father Ego.