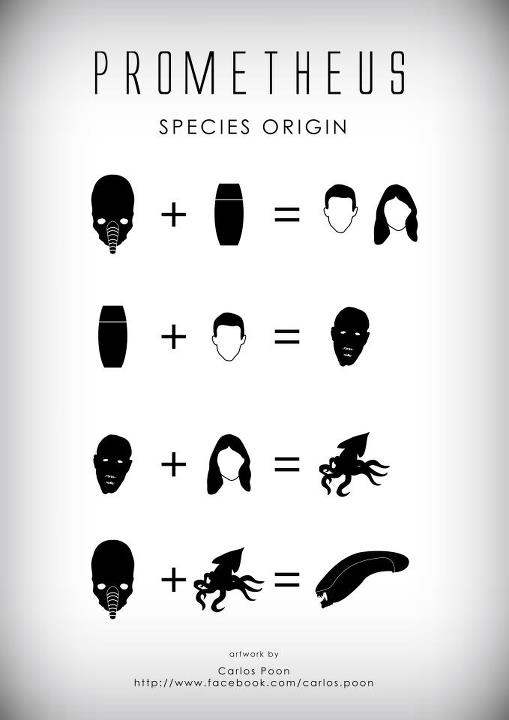 Thirty three years after he directed arguably his greatest film Alien, Ridley Scott returns to the franchise by creating a prequel set in the same universe but several hundred years earlier.

Prometheus begins with a team of explorers discovering cave paintings in Scotland that show ancient civilizations pointing to a constellation of stars in the heavens.  It is the same markings that can be seen in a variety of other unconnected civilizations.  “An invitation” is what scientist Elizabeth Shaw sees, from humankind’s forerunners, to come and meet their makers.

Peter Weyland, founder of the corporate empire Weyland Enterprises, funds a space exploration mission to the planet LV-223, which they identify as possibly being the location of the forerunner’s homeworld.  They go there aboard the ominously named spaceship Prometheus, which is probably the worst idea since the guys in Avatar went looking for ‘unobtainium’ on a planet called ‘Pandora.’  What could possibly go wrong?

Shaw is amongst the crew along with her partner Charlie Holloway and a range of other engineers and scientists, played by the cream of Hollywood’s talent.  Seriously, they got Tom Hardy, Michael Fassbender, Charlize Theron and Idris Elba.  I was chuffed with Prometheus before the crew even landed on V-223 and did anything.

On the planet surface, the crew discover a domed structure that houses architecture similar to the derelict spaceship discovered by the Nostromo in Alien.  There are also a pile of dead bodies.  They belong to forerunners, apparently fleeing from an unknown danger.

The crew discover a sealed shrine that has a monolithic headstone and vases filled with black goo.  Perhaps unwisely, but in a throwback to the original film, Elizabeth decides to bring back a dead alien lifeform onboard Prometheus for further examination.  If you’ve seen Alien, you’ve got a pretty good idea what happens next.

Ridley Scott didn’t need to revisit Alien but he chose to do so.  Now in the twilight of his career, he has made a prequel that is largely similar in structure to one of his earliest and most famous works.  There are some obvious parallels.  Both Alien and Prometheus share a strong female protagonist.  Shaw is every bit as tough as Sigourney Weaver’s Ripley.  Her survival instincts get put through the ringer in this film and there is one particular scene that caused me to wince and then sit bolt upright in my seat.  Rapace is a fantastic casting choice.  She is believably tough as nails but also intelligent and empathetic.

The film also purposefully revisits other motifs from the original.  There is an untrustworthy robot amongst the crew named David and the film uses him as a metaphor to explore the relationship between Man and his Creator.  The contempt with which the humans treat David is a mark of their unwitting hubris, considering that they wish to meet their own creators and hope for favourable answers to questions about their own origins.

In fact, themes around human mortality and faith run deeply throughout Prometheus.  It’s an interesting new wrinkle to the Alien series and I wonder if it comes from Ridley Scott, pushing his mid-Seventies, projecting his own hopes and fears onto the screen.

Prometheus is a highly anticipated film and it has launched to mixed reviews.  It tempered my own expectations leading into the film but I needn’t have worried.  It’s true that the film is slow, uneven in tone and is crammed with different ideas and themes that aren’t necessarily fully explored.  But for fans of the original film or of Ridley Scott’s work, I think this serves as a wonderful companion piece to Alien.  On face value, its an entertaining science fiction horror film.  It also is a great milestone in the career of a legendary director.  Ridley Scott is obviously a different man today than he was in the Seventies when he made Alien and its fascinating to see how that manifests in the ideas and themes of Prometheus.

Summary : A flawed but entertaining spiritual successor to Alien

Previous: Looking Back On The Nintendo Wii
Next: Superhero Day