Don't Miss
Home > Blog > TV Show Round Up: The Newsroom

TV Show Round Up: The Newsroom 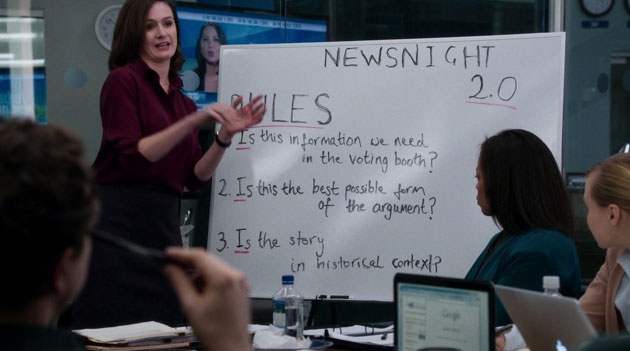 Its one of the worst hours of television I have ever seen.

There are plenty of tv shows on the air that are knowingly awful.  Or at least they’re designed to be purposefully low brow, silly, frivolous or shallow.  But few things are more awkward than watching a tv show as sanctimonious and preachy as The Newsroom miss the mark and get so many things wrong in a single episode.  I’ve known two friends who couldn’t last the journey.  They opted out and had to switch off the television before the credits rolled.  I think I winced less frequently during the self-applied surgery scene in Prometheus.  What on Earth went wrong?

For starters, Aaron Sorkin appears to be living in a technology bubble for the past decade.  The key element driving the storyline in The Newsroom‘s magical fantasy land is that Mackenzie McHale, a leading producer in the news broadcast industry, doesn’t know how to use her email and accidentally sends a private message about her breakup with Will McAvoy to the entire company.  This causes a cacophonic buzz of ringtones to go off when she makes this mistake because at Atlantis Cable News, not a single person has a silent or vibrate mode on their phone.  This is in the same episode supposedly set in 2010 but Mac is rolling out a set of broadcast guidelines called ‘Newsnight 2.0’ which is a riff on the term Web 2.0.  I remember the height of the ‘Web 2.0’s prominence in the media.  It was when Time Magazine awarded their Person of the Year award to ‘You’.  That was in 2006.

The Newsroom presents itself as a serious and passionate advocate of primetime news media that focuses on factual, intellectual reporting.  Too bad no one told MacKenzie McHale who has to play a character who must be a distant relation to Bridget Jones.  Watch as Mac stumbles around the office, making an arse of herself, knocking over a goddamn whiteboard and having ongoing public discussions with whoever will listen in the office about her past relationships and who she slept with.

The attitude this program and its writers have towards women is disgusting.  MacKenzie approaches a woman named Sloan Sabbith and recruits her for her program because she’s an economist ‘…with legs.’  Sloan accepts this bullshit, sexist reason without question and by the end of the episode, there is no development to the story where MacKenzie comes to appreciate Sloan’s worth as a serious journalist.  Nope.  She’s just an economist with legs.  Between her incompetent clutzy behaviour, her casual sexism towards her staff and the fact that she bizarrely behaves like a woman trapped in a Meg Ryan romcom, MacKenzie is an impossible lead female to like.  We keep getting told she’s amazing, smart and resourceful but we never get to see it.

Meanwhile, Maggie Jordan has had a complete character transformation from the pilot episode to this one.  We last saw her as a meek, mild mannered temp worker who Mac inexplicably decides to promote to associate producer.  Now she’s a brash, arrogant, emotionally unstable journalist who ditches producer Jim Harper to run a pre-interview with Governor Jan Brewer’s staff.  Of course, since she’s a woman who works at ACN, she completely fucks up the interview and Jim has to cover her mistake to save the day.  What went wrong?  She interviews an ex-boyfriend (what a coincidence!) and like MacKenzie, Maggie is completely incapable of acting professionally and seperating her working life with her personal one.  She makes a remark about how long the interviewee lasts in bed.  What a lark!

The aspirations of the show to portray a current events program in an even-handed but thoughtful fashion go down the toilet in the second episode too.  When Governor Jan Brewer cancels an appearance on Will’s show, Mac is tasked with finding immediate replacements.  They are insulting, absurd caricatures of Republicans – a cheerleader, a conspiracy theory author and a border-patrolling gun nut.  The show acknowledges that this was a failure on Mac’s part but why even do this?  Why so early in the show?  No amount of claiming that McAvoy is a ‘moderate Republican’ changes the fact that the show isn’t presenting the best possible form of arguement for the Republican side.  It hasn’t since day one.  The show’s portrayal of office romance is grating but it isn’t even handling the show’s coverage of current events competently.

The Newsroom is inexplicably bad.  How!  How can this be from the same person who wrote and produced The West Wing and The Social Network?  It beggars belief.  This is one of the most disappointing shows that I’ve seen in a long time and this episode must surely be the low point.  It can’t get worse than this.

Tagged with: Aaron Sorkin The Newsroom