Don't Miss
Home > Blog > TFW Show Round Up: The West Wing Season One, The Thick Of It Season Four, The Newsroom Season One

The West Wing Season One

A clip of President Bartlett speaking to a conservative radio host. This is actually from Season Two but who cares.

The West Wing is a television drama about the two terms in office of the fictional Democratic president Josiah Bartlett.  It is a wonderful show that serves in many functions.  First and foremost, it is a well written drama and each season contains both long term story arcs and bite sized stand alone stories for each episode.  It is also a really informative primer on American politics that shows you the key decision makers in a presidential administration as well as offering a snapshot into the type of bartering and deal making that must be made within your own party, the opposition, members of the senate and congress, the lobbyists and the public.  And all of this is delivered in creator Aaron Sorkin’s trademark quickfire dialogue which rapidly doles out exposition sandwiched with wisecracks, insults and pithy retorts.  In summary, its a show about well dressed people walking down long stretches of corridors, talking really fast and I think its really good.

The first season began at the end of 1999 and looking back at it now, its certainly an interesting product of a bygone era.  Nowadays, the vast majority of good quality television exists on subscription cable channels like Showtime, HBO and AMC.  Looking at American free-to-air programming today and its a wasteland of reality programming, five million Seth McFarlane cartoons and shitty sitcoms.  I tried watching NBC’s new big budget show Revolution and it was absolutely dreadful.  By comparison, in the Nineties you had Judd Apatow, Aaron Sorkin, Joss Whedon and Sam Raimi all producing shows for the masses.  But what made those shows so interesting was that they had to work within the confines of the rules of free-to-air television and I believe that framework actually drew some of the best work out of these people (Apatow’s Freaks and Geeks being a prime example).

The West Wing has aged exceptionally well.  The CRT monitors and 4:3 aspect ratio not withstanding, the content of each episode is still sharply written and often times eerily prescient of politics to come in 2012.  In the first season, Deputy Communications Officer Sam Seaborne accurately predicts that privacy and online security will be major concerns for American citizens in the 21st century.  Most of the Bartlett Administration’s ideas and challenges progressing policies on gun control, capital punishment, abortion and the environment are directly applicable today (perhaps a sign of how little progress has been made).  Lastly, the show quite accurately predicts the rising influence that the religious right would go on to have in the last decade.

But the best thing about The West Wing is its unabashed and unbridled optimism.  Every episode, you keep the company of an ensemble cast of bright, intelligent and well meaning people who want to do good in the world.  And thats a rare thing for tv programmes in any year.  As a viewer you warm to President Bartlett’s pragmatism and passion, laugh at his idiosyncracies and obsession with historical trivia.  You admire the honour and quiet dignity that Leo McGarry brings to the office and the way he holds the administration together.  CJ Cregg is a smart, intelligent and funny.  Toby Zieggler, Sam Seaborne, Josh Lyman, Donna Moss, Charlie Young…really, they’re all awesome.  If only more shows strived to be as positive and informative.  Sadly, even Sorkin’s own work in 2012, The Newsroom, lost that good natured heart for something more cynical and weary.

The Thick Of It 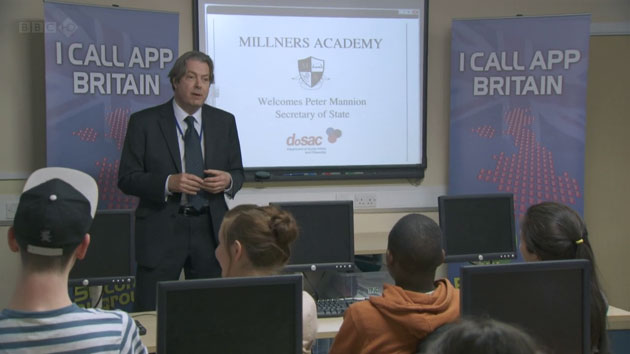 The Thick Of It is a British comedy that satirizes the British government.  It’s original three season run took place from 2005 to 2009 but after an extended sabbatical, the show is back on the air.  This fourth season sees a newly formed coalition government that obviously draws its influence from the Tories and Liberal Democrats.  It’s an easy target for skewering and not surprisingly, it delivers plenty of laughs at the expense of the awkward political bedfellows.

The first episode in the season sees Torie MP Peter Mannion tasked with delivering a new digital initiative to university students in which he tries to incentivise the creation of smart phone apps.  Unfortunately for Peter, he is an absolute luddite and has no idea what he is talking about.  He is easily flummoxed when doing his presentation and veers off message when challenged by a student named Raj who Peter manages to offend on racial grounds as well as making a promise on payment of apps that he can’t keep.  This infuriates the Liberal Democrat Fergus Williams who created the initiative but was removed from the presentation of it to the public.  It’s a short and sweet concept for an episode but I enjoyed it immensely and it reminded me of John Howard trying to talk about broadband internet in 2007 against Kevin Rudd or Tony Abbott trying to talk to Leigh Sales about, well, anything.

I’ve never seen The Thick Of It before but was a big fan of creator Armando Ianucci’s spin-off film In The Loop as well as his American version of the show Veep.  It was very easy to jump in on the fourth season and follow what was going on.  But based on the strength of this episode, I look forward to going back and watching the entire series.

I haven’t had a chance to finish watching the first season of The Newsroom yet.  I’m only three episodes in.  But I have to offer a retraction of my earlier criticism of the show.  Aaron Sorkin was right and I was wrong.

When I blogged about The Newsroom a couple of months ago, I said that the show’s portrayal of a broadcast journalist actually calling a politician on their bullshit in a non-partisan, constructively argued fashion seemed fanciful and far removed from the realities of America’s 24 hour news cycle.

I also argued that the show portrayed its female staffers as being unrealistically, insultingly stupid.  In the second episode of the show, one of the female staff can’t work out how to use her smartphone and accidentally sends a private message about a relationship to the whole office.  I have a hard time believing that in 2012, any woman in a professional environment could be so stupid.  The show was particularly unkind to actress Alison Pill who is portrayed as a blithering idiot.

Anyway, since I wrote that blog, CNN broadcast journalist Soledad O’Brien did this:

And a few weeks later, Norah O’Donnell took Republican vice presidential candidate Paul Ryan to task when he criticized Obama for defence spending cuts that he himself voted for:

Aaron Sorkin was right and I was wrong.

Tagged with: Aaron Sorkin Armando Ianucci The Newsroom The Thick Of It The West Wing