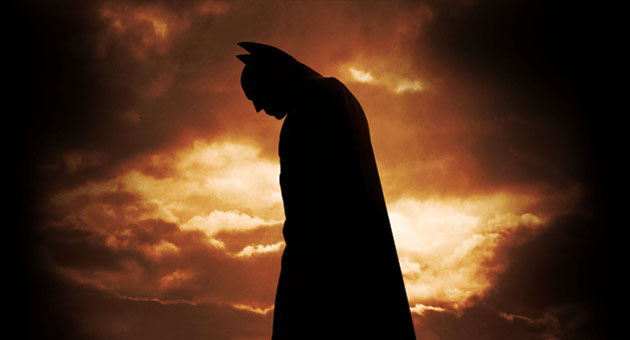 Batman Begins is where it all began for Christopher Nolan’s critically and commercially lauded Batman trilogy starring Christian Bale.  It’s often overshadowed nowadays thanks to Heath Ledger’s performance in The Dark Knight but I’m happy its getting a limited re-release in theatres in the lead up to The Dark Knight Rises.

To my mind, Batman Begins is the one of the most successful adaptations of a graphic novel into a film.  When you think of comic book movie adaptations, Zac Snyder of 300 and Watchmen fame is generally one the first names that springs to mind.  However I find that Snyder is almost too literal in his approach.  He tends to slavishly storyboard his films so they directly match the source material and this can often lead to an oddly paced film like 300.  What suits the pacing of a comic doesn’t necessarily work well in motion.  And with Watchmen I felt Snyder was so clinical in his adaptation that I felt he had almost no input into the film’s message.  He was reduced to being Alan Moore’s messenger boy.

Nolan’s Batman Begins is based on Frank Miller’s excellent Batman: Year One, a series of comics he authored in the Eighties.  It’s a far more grounded and character driven iteration of the Caped Crusader that trades in the lavish bombast and gothic extravagance of the Burton films for a grittier, almost noirish tale.  In fact, in Nolan’s version of Gotham city, the most influential criminal isn’t a colourful villain from Arkham Asylum but Carmine “The Roman” Falcone, a mob boss who runs the streets and has the back pocket of the Gotham police force.

When Falcone’s gang murders Bruce Wayne’s parents, Bruce plans a revenge killing which he fails to complete only because someone else beats him to the punch.  His admission of his intent frightens away his childhood sweet heart Rachel Dawes and Bruce leaves Gotham an angry, aimless wanderer.

He returns many years later, physically fitter and more determined than ever to punish Gotham’s criminal underworld.  He engages Lucius Fox, an engineer at his father’s company Wayne Enterprises and enlists his help to transform into the crime fighting persona Batman.

Batman Begins is an origin story not just for Bruce Wayne but also for Jim Gordon, a seargeant in the Gotham City Police Department.  Gordon is the ying to Wayne’s yang.  He is uncorruptable, wants desperately to believe in the good of the law and has the courage to fight crime without the security of a masked identity.  The relationship Gordon has with Wayne becomes a backbone to the trilogy and its easy to see Gordon as the true hero of the trilogy.  Wayne is an eccentric playboy millionaire who takes the law into his own hands.  Gordon is a virtuous, steadfast everyman.

Batman Begins follows the blueprint and basic structure of Miller’s Batman: Year One but where it suits the pacing or content of a film, Christopher Nolan is happy to jettison whats in the source material and add a love interest or a spooky otherworldly villain.  What results is a Batman that feels refreshingly distinct from the many iterations before it.  Along with Inception, Nolan’s Batman films have been labelled the ‘thinking man’s blockbuster.’  It’s got plenty of action, an engaging lead performance from Christian Bale and a surprisingly broad appeal to both comic book fans and casual audience alike.  There’s a depth to Nolan’s storytelling that results in a hero who is often fighting an idealogical battle rather than just a physical one.  Bruce Wayne gets caught up in a tangled, often contradicting set of morals with his dual life as a millionaire philanthropist and Batman and this gets twisted and contorted even further by his ever growing relationship with Rachel Dawes and Jim Gordon.  It’s what puts the Nolan Batman films in a different class to Marvel superhero films which all start out differently but generally end up with goodies hitting baddies over the fate of the world.

Revisiting Batman Begins seven years later, I felt the film holds up pretty well.  Christian Bale is a great Batman and delivers easily my favourite interpretation of the Bruce Wayne role.  He is ably supported by a strong supporting cast that features great character actors such as Tom Wilkinson (as The Roman) and Gary Oldman (as Jim Gordon).  The film also appears to have hired every wisened, old mentor working in Hollywood casting no less than Morgan Freeman, Michael Caine and Liam Neeson all in varying forms of this function.  The only thing that irks to this day is the jarring shaky cam that gets utilized during some of the fight sequences.  I was happy to see this dropped for the sequel.

Batman Begins is one of the best Batman films adapted to the silver screen.  It doesn’t get as much love as it should thanks to the high profile popularity of its sequel but it definitely holds its own.  Do yourself a favour and check it out before watching The Dark Knight Rises this weekend.

Previous: Lego Town Hall 10220
Next: TV Show Round Up: The Newsroom