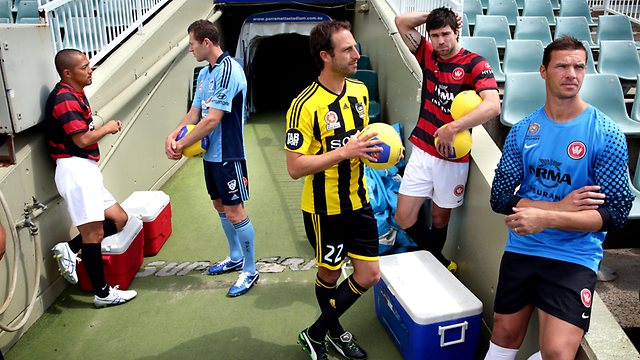 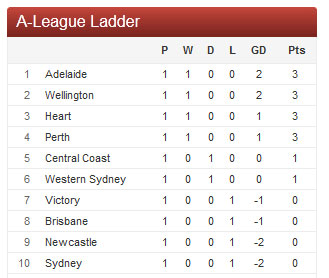 The eighth season of the A-League got under way this weekend and wouldn’t you know it, none of the teams that signed big marquee players won a game.  Sydney and Newcastle were both played off the park by their opponents while the debutant club Western Sydney Wanderers were held to a scoreless draw in their first ever game.  It was a round where the underrated and the underdogs showed their quality.  Ange Postecoglou didn’t win his first game managing Melbourne Victory.  Brisbane Roar didn’t get their defence of a Premiereship double off to a winning start either.  Its early days but sitting atop the table are the much unfancied Adelaide United, Wellington Phoenix and Melbourne Heart.

Here’s a few observations that I think most people will share from this weekend of football:  Melbourne Victory still have an absolutely awful defence and no amount of skill up front with Marcos Flores and Archie Thompson will help them be a competitive side until they get their back four in order.

Having said that, Sydney FC were by far the most disjointed team in the opening round looking like eleven strangers playing together for the first time.  Del Piero was excellent for the few touches of the ball that he had but the rest of his team were absolutely awful.  It’s embarrassing to think about Sydney’s games being aired in Italy.  I’m all for the A-League bringing in big name talent but the gulf in talent between ADP and the rest of his team was mind boggling.  I know he’s signed on for two seasons but unless Sydney improve a lot and improve quickly, I can’t see Del Piero squandering his last couple of years toiling for such a talentless bunch of hacks.

Wellington Phoenix on the other hand looked fantastic and their new signings Totori, Huysegems and Fenton all impressed.  Unless they come undone from injury, they look like a team destined for finals football.  It helps that the majority of their squad have played together for so many seasons.  Western Sydney Wanderers deserve credit for coming together as a new club in just six months.  They did well to hold out the Mariners and surely will improve from here onwards.  I can’t see them finishing with the wooden spoon.  Unfortunately, I didn’t get a chance to watch the Adelaide United victory over Newcastle but its an impressive test of character after being knocked out of the Asian Champions League just a week prior.

The Brisbane Roar traveled away to Perth Glory for a grand final rematch to start their 2012/13 campaign.  The Glory’s regular NiB stadium was under construction so they held the game at an AFL stadium.  It sounds weird but the pitch ended up looking okay on the telly even though it was a rectangle drawn onto an oval.  Although it’s disappointing to start the season with a loss, I think there was plenty of positives to take away from the game.  We dominated large chunks of the possession and still strung together some impressive passages of passing play.  Thomas Broich remains a key playmaker.  Ben Halloran looks like a great addition into our squad and his speed up front will surely yield some goals as the season goes on.  He was unlucky not to score on debut, hitting the crossbar in injury time.  The only thing I’m a bit nervous about is that Rado Vidosic has now coached the Roar for five games without a win.  Now granted the previous four include two caretaker matches and two Asian Champions league matches but it’ll be nice for him to get that first win sooner rather than later so it doesn’t become ‘a thing.’  The only minor disappointment for me from the opening round was 18 year old Korean midfielder Do Dong Hyun who came on with about twenty minutes to play and gave away possession cheaply half a dozen times.  I’m sure he’s better than what we saw in that outing and hopefully the nerves don’t get the best of him next time.