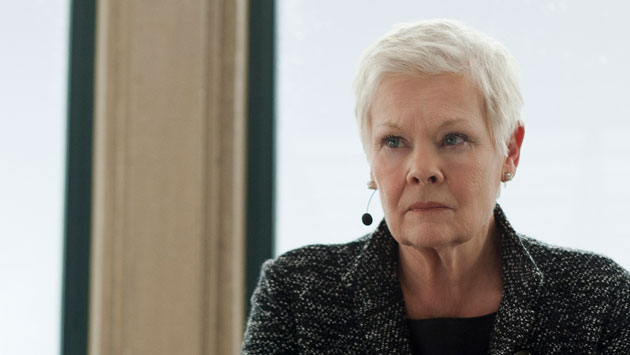 It all starts with a bang.  Within minutes of Skyfall‘s artfully produced opening credits, Bond is accidentally shot off a train top by a fellow agent and MI6 headquarters in London is blown up in an apparent terrorist attack.  Behind the terror attack is Severine, a former MI6 agent, who has a personal vendetta against M.

If that wasn’t bad enough, M is facing pressure from her own government who believe her methods to be a thing of the past, an aging ineffectual leader who has been unable to keep up with the changing face of international terrorism.

Skyfall, the 25th James Bond film, is an excellent spy thriller on its own merits but it is best enjoyed as a Bond film that knows the rules and then breaks them, toying with fan expectation and giving them something they haven’t seen from the franchise before.

It was only a month prior to Skyfall‘s release that I finally saw Dr No, the first Bond film.  What’s interesting about that film is that there are no gadgets and Bond largely gets by on his wits, his brawn and his romancing of women with valuable information.  The absense of gadgets is shortlived and by the third film in the series, Goldfinger, Bond is flying on jetpacks and shooting people with pens that shoot poisonous darts.  Bond gadgetry probably reached its zenith with the Brosnan films and now in Skyfall, they are scaled back to Dr No levels.  As the new Q explains, the age of gadgetry is over and the real power lies with the ability to control and manipulate digital information online.

This is a film that is concerned with the changing of the guard and the rigours of age.  Bond himself is seen to be growing weary and out of touch.  He isn’t the strongest, the fastest or the sharpest shooter in MI6.  In fact he can no longer pass the test to qualify as an agent.  His greatest assest is his experience.  He clings to the familiar.  He isn’t interested in a BMW with the latest technology from Q.  He wants to drive the classic Aston Martin.

The way that director Sam Mendes views Bond through the lens gives us an insight into his views on the franchise as a whole.  Mendes, and I believe the audience, has a fondness for classic Bond.  The cars, the beautiful women, the high speed chases.  But for the series to survive, it must also modernize.  You can have Bond girls but equally there is also room for a capable Miss Moneypenny who exists as a character beyond a secretary to be flirted with.  You can reintroduce Q but they can use technology that is less kitschy and more atuned to real world technology.  You can have colourful antagonists but there’s no reason why you can’t cast an Oscar calibre performer in the role.  The new Bond is respectful and reverent of old traditions but it also updates things just enough to keep the film apace with modern thrillers like the Bourne franchise.

There is plenty to like about Skyfall.  Daniel Craig has really carved out a strong and unique identity in his role that doesn’t feel indebted to the performances from his predecessors.  He is stoic, suave and has a wry sense of humour.  The film is spoiled with a rich supporting cast that includes Javier Bardem as an entertainingly creepy villain, Judy Dench in her most challenging and substantial role as M and Albert Finney turns up during a rather unexpected homage to Home Alone.  Skyfall is an excellent Bond film that scraps the old formula and lays out a future for the franchise that seems full of promise.

Previous: Blogs From America
Next: Glenfiddich Age of Discovery