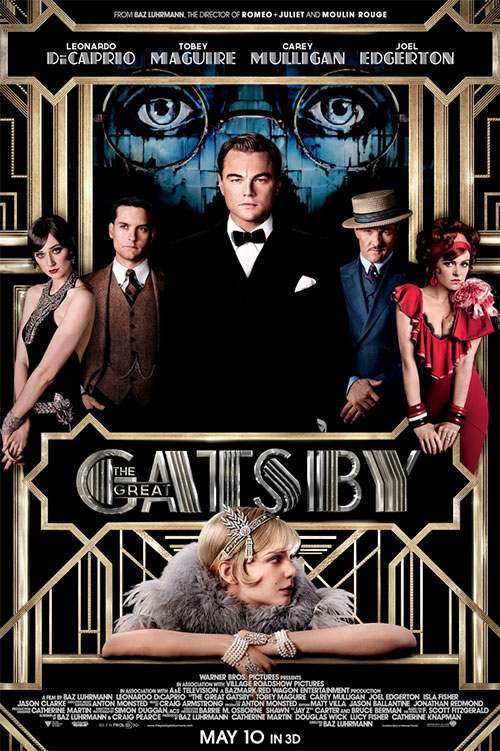 There are some films where you know within ten minutes whether you’ll like it or not.  With The Great Gatsby, the latest film from Baz Luhrmann, you can probably make that call based on the poster.  How receptive are you to watching The Great Gatsby In Real 3D featuring music by Jay-Z?

Personally, I like Luhrmann and his films.  They tend to draw a tepid response from film critics but I like the kinetic energy that is his visual trademark.  And having never read The Great Gatsby, I don’t feel particularly precious about a modernized adaptation that takes liberties with adding a dupstep and hip hop musical score.  Luhrmann made his name working this formula with Romeo + Juliet after all.

We see the world through the eyes of Nick Carraway (Toby Macguire) who is committed to an asylum in the 1920s, suffering from depression and alcoholism.  He describes to his psychologist the friendship he formed with his neighbour, a wealthy business tycoon named Gatsby.  Jay Gatsby is famous in New York for holding lavish open-invitation parties at his mansion which he attends but few people know him by sight.  Most people are simply there to get loaded.

Carraway befriends Gatsby when they meet at one of these parties.  Gatsby is a strange, lonely and eccentric millionaire.  He seems obsessed with carrying himself as a made man, wearing out the expression ‘old sport’ to a ridiculous degree.  We come to learn why this is later on.

Gatsby discovers that Carraway has a friendship with Daisy, an old flame.  Daisy and Gatsby had a relationship ten years prior but after Gatsby left to make his fortune, Daisy marries the scoundrel Tom who is unfaithful and unkind to her.

What plays out is an awkward love triangle where Gatsby attempts to win back Daisy from Tom.  Daisy clearly returns Gatsby’s affections but can’t bring herself to end her marriage.  Tom sleeps around and cheats on Daisy but becomes infuriated when he suspects she’ll leave him for Gatsby.

In short, everyone comes off terribly.  I was feeling some sympathy for one of the characters towards the end of the film but then they rather idiotically commit an act of vehicular manslaughter which put an end to that.

I’m not really sure what to make of The Great Gatsby.  I didn’t much care for it.  I presume Luhrmann is reasonably faithful to the core themes of F Scott Fitzgerald’s novel and viewed from the perspective of literature written in the 1920s, perhaps it was considered insightful or poetic to observe that the filthy rich aristocracy have relationship problems and struggle to find happiness?

As a contemporary film, its probably not the right time for The Great Gatsby.  Not when America is currently facing the greatest wealth imbalance it has ever seen, with an ever growing divide between the haves and the have nots.  Gatsby is a fraud, he does nothing meaningful or charitable with his fortune and he surrounds himself with vain, self obsessed socialites.  The film asks us to sympathize with him by the time the credits roll and to be honest, I couldn’t tell if Luhrmann was trolling us or not.

Summary : As is the standard with all Luhrmann productions, The Great Gatsby is a lavish looking film with all the bells and whistles. Unfortunately, I was rather non-plussed with the tale about the man himself.