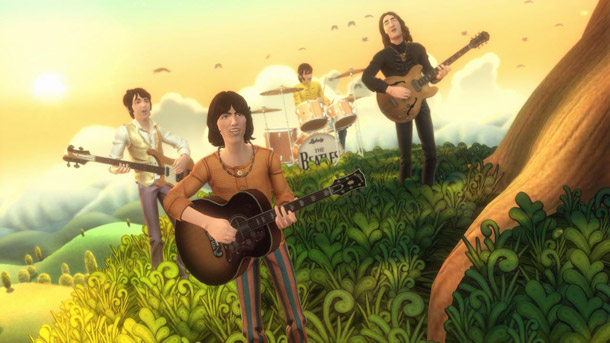 
Whilst playing and enjoying The Beatles Rock Band, there were many times when I felt like I couldn’t quite believe my luck with what I was playing.

Firstly, The Beatles are notoriously guarded with the use of their license.  Major film studios have tried and failed to secure their music in the past.  That a video game company of all things should succeed in getting not just a downloadable song pack but a comprehensive catalogue of albums and the band’s likeness is something else.  I’ve read that Michael Jackson wanted to charge the producers of the film I Am Sam $300,000 per song if they wanted to use The Beatles tracks that he owned the rights to.  The Beatles Rock Band game includes 45 original Beatles songs with more downloadable songs at $3.50 AUS per track.  I’m glad that someone, somewhere, is footing the bill for this.

Another reason I couldn’t quite believe my luck that I was playing The Beatles Rock Band was because the game is as rare as hen’s teeth.  It’s quite extraordinary to think that with all the potential pitfalls that this game could have had, when balancing the egoes and demands of Apple Music Corp, EMI, MTV, EA Games and Harmonix, the one part where it all seems to have fallen down, at least outside of America, is distribution.  I’ve read countless blogs, Twitter feeds and message board posts about people who want to buy a copy of this game but simply cannot find it stock anywhere.  I personally spent two hours unsuccessfully looking for an Xbox 360 copy in Brisbane.  I was only able to get my hands on The Beatles Rock Band when my wife found a copy in a shopping mall down at the Gold Coast, some 80km away from where I live.  EA’s distribution of this game, which has seen mainstream media coverage and high consumer demand, has been nothing short of disastrous.  Although their track record hasn’t been great with the Rock Band brand in general.  The original game was delayed by a full year and its sequel never made it over here.

Lastly, I couldn’t quite believe my luck that in finally playing a Beatles video game, it wasn’t simply a download song pack (which I still would have been thrilled with) but a superbly well-crafted tribute to the band that indulges the player in lavish presentation and is packed with rare photos, videos and interesting factoids about the Fab Four.  This is a far better game than I had hoped for.

The story mode is a journey through the career of The Beatles, starting with their origins at The Cavern Club in Liverpool.  The venues modelled by Harmonix are fantastic and the recreation of rabid fans cheering them on at venues such as The Ed Sullivan Show and Shea Stadium contribute hugely to the experience.  Better still, there are little snippets of dialogue between the band members at the start and end of the songs which add even more to the authenticity and immersion of the game.

Once you reach the point where The Beatles quit doing live performances, Harmonix gets to flex their creativity in the studio sessions for Abbey Road.  Each song starts in the studio but then the comes to life with some imaginative visuals to compliment the music.  I Am The Walrus, Lucy In Sky With Diamonds and Octopus’ Garden are all as psychadelic as you would imagine and other tracks, such as Dear Prudence, have imagery that compliments the music in a lot more subdued manner: the backdrop switches between monochromatic studio shots for the verses to a bright and colourful field for the chorus to great effect.

The charts for the songs themselves are of the same standard in their previous Rock Band titles.  Harmonix have shown an uncanny knack for creating charts that really replicate the sensation of playing the instruments and when playing on the higher difficultly settings, they resist the temptation of arbitrarily making the note tracking needlessly obtuse.

It’s pretty hard to screw up the track selection for a Beatles game and fortunately, Harmonix doesn’t faulter here.  The approach they seem to have gone for is to pack the disc with the crowd pleasing hits and then to satisfy completists, the rest of the albums will be made available as downloadable content in the coming months.  Personally, I’m looking forward to the Rubber Soul album, which is due to arrive in December.

This is a exceptionally well made package and by far my biggest concern (not to harp on the point) is that the game won’t sell nearly as well as it deserves to, due to EA’s fucked up distribution.  This is easily one of the best experiences of the year across all the console formats and its a shame to think one of the biggest barriers to entry is simply getting a copy of the game itself.

Summary : One of the greatest bands of all time is given a polished video game adaptation that couldn't be better. Its reverential, educational and retains all the fun of the basic Rock Band format. Brilliant.

Previous: The FAT Website Show – Growing Up In Brunei
Next: Video Game Season