After a prolific run of four mainline titles and two spin-offs published on the Nintendo DS, it has been a quiet period for video-gaming’s most famous defence attorney.  But its 2013 and Phoenix Wright is finally back, albeit in digital download form only, thanks to the mediocre sales of his previous outing.

In Dual Destinies, the first game in the series designed for the Nintendo 3DS system, Phoenix and his Scooby gang must work through five cases during the ominous Dark Age of the Law.  This is the name given to the current age where prosecution rates are improbably high and the general public has lost faith in the judicial system thanks to ruthless prosecutors who fabricate evidence and basically take a ‘conviction at all costs’ approach to applying the rule of law.

Although the Western adaptations of the Ace Attorney games are set in America, its always been a bit of a running joke amongst fans as no attempt is made to Westernize the obviously Japanese heritage that runs through the games, ranging from the Shinto temples, to the traditional kimonos worn by characters to the diet of ramen consumed by everyone.  In fact, even the legal system, with its complete absence of a jury of peers, is clearly based on the Japanese justice system.  It’s then somewhat interesting and uncharted territory for a game as light hearted and filled with frivolity as Phoenix Wright to draw attention to Japan’s real life corruption problems and their very real 99.8% prosecution rate. 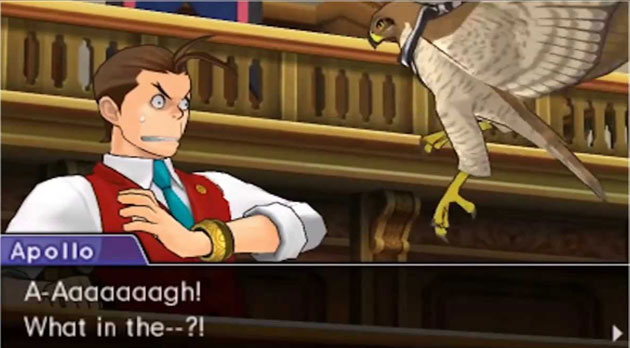 Although Phoenix Wright is undoubtably the lead character in Dual Destinies, you have a chance to play as both Apollo Justice (from the fourth Ace Attorney game) and Athena Cykes, a new character to the series.  Each character has a distinct and charming personality and each has their own special legal ‘ability’.  Phoenix has Psy-lock where he can determine when a witness is witholding information by visualizing figurative padlocks around them.  Apollo has a magic bracelet that allows him to detect the slightest twitch in body language during a witnesses testimony which allows him to catch people in a lie.  And lastly, Athena has a widget around her neck which projects a ‘Mood Matrix’, a Minority Report style holographic interface that allows her to cross reference testimony with emotional quadrants that allow her to identify inconsistencies in what a person says and how the genuinely feel.  Even one of these abilities would be an enourmous boon in a court room.  Having access to all three feels like cheating.  No wonder they have a 100% success rate in defending clients despite the improbable odds.

Dual Destinities is one of the best installments in the franchise and it is admirably creative in spite of having a fan base that would quite happily see the same set of characters return over and over again.  They have replaced the once ever-present Detective Gumshoe with the newer, campier Detective Fulbright.  None of the classic old witnesses like Larry Butz or Wendy Oldbag are here either.  Instead we are treated to a whole new cast of characters and they are highly entertaining in their own right.  A high school paparazzi journalist and a hyper-active teenager who carries a bizarre secret were some of the highlights of the new breed.

The game’s most notable change is the fidelity of the graphics which are now signicantly more detailed than what the series has traditionally had on the Nintendo DS.  The 2D sprites have finally given way to 3D models.  There was a real danger that the game could lose a lot of its charm with this upgrade as a lot of the appeal of the characters was from their over the top, repeating key-frame animations that looked like animated GIFs. 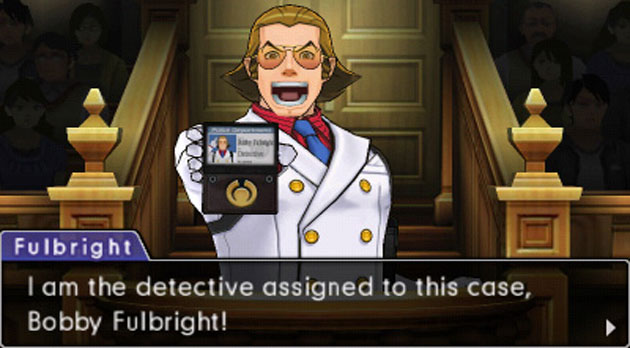 Happily, Capcom have done a superb job handling this transition and after the initial novelty wears off, there is still a sense that the new graphics and more sophisticated art style hasn’t diminished the game’s aesthetic at all.  If anything, its probably more expressive than ever before.  The only thing I could have done without are the brief anime cutscenes which are non-sensical and introduce some shockingly poor and unwanted voice acting into the equation.

Trials and Tribulations, the third Ace Attorney game, and Dual Destinies are probably my two favourite games in the series and its no coincidence that they share a similar story telling mechanic.  Both games have four stand alone cases that are ultimately tied together by a Big Bad that has been casting a shadow over the whole game.  Although we probably end up hearing the term ‘Dark of the Law’ more times than we need to, it does end up becoming the heart and soul of the Dual Destinies experience and climaxes in a wild and unpredictable final case that is filled with dramatic plot twists out of nowhere.

It’s great to play a new Phoenix Wright game and I’m glad to see I’m not alone.  After the soft sales of the most recent iterations, it was possible that a poor performing Dual Destinies would have meant the death knell for the franchise in the West.  Happily, Capcom have gone on record saying that sales are up and commercially it is performing above expectation.  Hopefully this means Phoenix and the Wright Anything Agency will be solving many more cases in the years to come.

Summary : A welcome return for the ace attorney. This 3DS version has some terrific cases and the games humour and charm is as appealing as ever.

Previous: The Legend of Zelda: A Link Between Worlds
Next: Youtube Friday: Linus and Lucy by Vince Guraldi