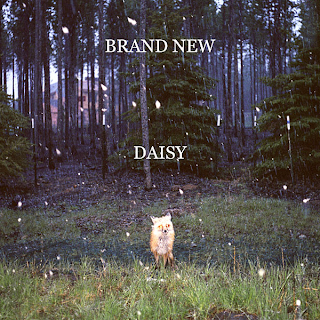 I find it hard to believe there are any casual Brand New fans out there anymore. The band hasn’t written a pop song since their debut “Your Favorite Weapon” and probably haven’t done any press (in the United States) since.

While every Brand New record has been a giant leap from the one previous in terms of experimentation, Daisy is undoubtedly the most challenging as a listener. Full of chaos, dynamics, and the teetering balance of whispers and screeches of Jesse Lacy, Daisy is not a pop record. And you probably won’t like it the first time though. Or the second. Don’t try and listen to this record while doing anything else. Some might argue that an album this hard to get into is a failure, but for the ones willing to put in the time the rewards are there.

Oddly, the album doesn’t even get going until track 3, the first single At The Bottom which sounds a lot like what we have come to expect from Brand New save the fact that it actually has a pretty decent hook.
Following that is Gasoline which gets back into the wail/chaos of the first two tracks with a driving drum track accentuated by Nirvana-esque guitars.

The excellent You Stole harks back to the sound of their breakthrough album “Deja Entendu” and may be one of the best songs they’ve written since okay I believe you but my tommy gun don’t. Drifting along with muted guitar riffs while Lacy waxes lyrical in traditional BN fashion with “So if I’m a liar, and you’re a thief, at least we both know where the other one sleeps.”

Following that is the experimentation in weirdness that is Be Gone, a track that proves if you’re big as Brand New is, no producer will ever tell you something is a bad idea.

After that frankly unlistenable track is where the real quality lies and that’s the main issue I have with this record: while there were moments of interest in the first 7 tracks, the last 4 songs are so good they should have balanced the record a little better.

Sink is bitter and biting and charges forward at good pace, while Bought A Bride has a fantastic bass line and Jesse really lets his voice hit full potential, sounding like it will crack at any moment.

The title track is back into familiar haunting Brand New territory and save it’s occasionally disjointed feel, wouldn’t have sounded out of place on their previous album: “The Devil and God are raging inside me.”

Closing out the record are In The Jar and Noro, which epitomize the record in full. The former a bubbling, brewer of a song while the latter is an dark opus where Lacy exercises his demons that seem to plague him on the mortality of the band as a whole.

One thing is for sure, Daisy is not happy. It sounds tortured throughout and Jesse manages to dive into his darkest places ever and create a thoroughly exhausting record. That’s not to say it’s not good. Because it is. It’s brilliant. But Brand New have never been very cheerful, so if you’re looking to embrace something a little more chilling, this is their finest work to date.

EDIT: I didn’t realize I uploaded my first draft of this initially. That’s what I get for trying to write while my girlfriend is yelling at me to turn off “that sad bastard record.” My apologies.