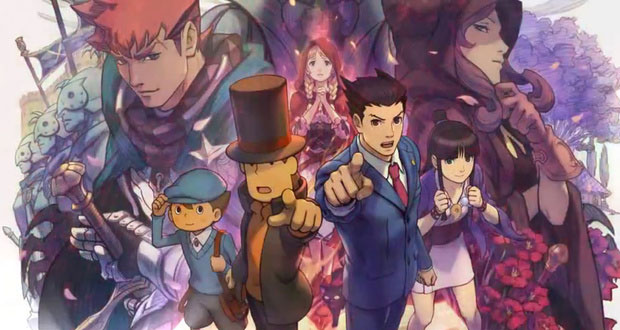 Although cross over projects, no matter what the medium, are almost always terrible, I can’t help but get excited about them when they first get announced.  Do you remember The Jetsons Meet The Flintstones?  Cartoon Allstars To The Rescue?  I don’t even watch The Simpsons or Family Guy any more but I will watch their upcoming cross over episode out of morbid curiousity.  I’m a sucker for the novelty I guess.

And so it was when the video game Professor Layton Vs Phoenix Wright was announced for the Nintendo 3DS.  Just look at this post from four years and you can see how excited I was (and how I naively thought I would be playing it in 2011).  When it comes to popular and entertaining characters in video games, it doesn’t get much better than the Ace Attorney and the Professor, both veterans of game franchises that have sold in the millions and are popular around the globe.  The Professor is a cool, calm and collected Englishman who prides himself on his grey cells and his gentlemanly behavior.  Phoenix Wright is an earnest, funny and determined defence attorney, who often appears to be in over his head but always finds a way to save the day thanks to the support of his friends and his determination to help the down trodden.  To me, this seemed like a pretty potent pairing.  Layton could play a pretty good straight man to Phoenix who tends to be more melodramatic and comical.  They seemed to compliment one another pretty well and both come from game franchises that are spoiled for choice when it comes to entertaining and colourful secondary characters.

The story begins in England as a young woman Espella Cantabella flees what appear to be supernatural demons who are attempting to abduct her.  She crosses paths with Professor Layton and his faithful assistant Luke who, upon learning she is in danger, swear to protect her and keep her safe.  This lasts all of 30 seconds before ‘witches’ appear and snatch Espella.  Layton and Luke find a clue in the form of a mysterious spell book which suddenly bursts open with a bright light and transports them to a strange faraway land named Labyrinthia.

Meanwhile, Phoenix and his ever-present companion Maya Fey arrive in London on a business trip.  When they arrive, they too come across this spell book and are unceremoniously dumped into Labyrinthia.  Both are stricken with amnesia and begin new lives as bakers.  This brief period of the game where Phoenix becomes a passionate advocate of fine artisan loaves was one of the funniest parts of the game for me. 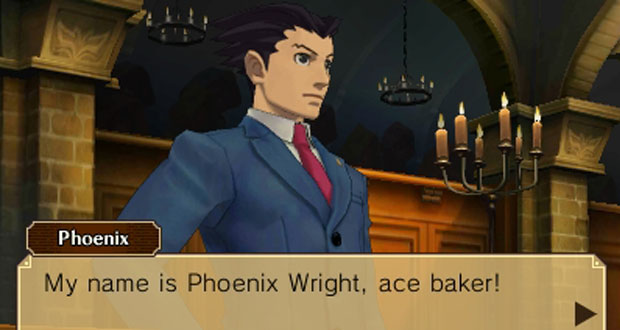 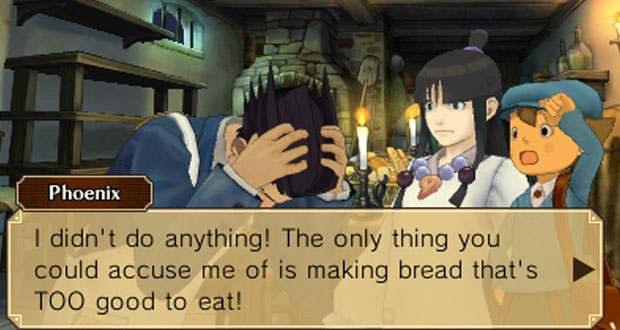 Professor Layton Vs Phoenix Wright draws its narrative from two key sources.  One of them is the Salem Witch Trials, the other I shall reveal later.  Labyrinthia is a strange and supersticious town which is surrounded by high walls isolating it from the rest of the world.  Everyone is dressed in medieval garb and believes that their lives are pre-ordained by the power of The Storyteller, a power masked leader who writes prophecies that always come to pass.  His most ominous proclamation is that the village is cursed with the presence of witches and they must continue to put them on trial and immolate them until they capture and execute The Great Witch Bezella.  Only with her death will the curse be lifted.

It’s an unexpectedly dark tale that seems slightly at odds with the cheery art style and chipper dialogue exchanged between the four main characters.  Unfortunately, the scope of the witch trial narrative ends up being rather limiting and repetitive.  Literally every court case in this game is a witch trial.  This not only becomes rather tedious when you roll around to your fourth or fifth trial but I found it also diminished my sense of engagement when so many of the key plot twists and developments in the case are predicated on how magic spells work and what powers the witches supposedly have.  It feels more like you’re at the whim of the game writers and what they decide to come up with as opposed to any personal sense of accomplishment in sorting through evidence and finding logic fallacies in the testimonies of the witnesses.

Broadly speaking, the game mechanics work reasonably well in meshing the puzzle mechanics of Professor Layton games and the court case game play of Ace Attorney games.  In fact, there is virtually no difference in the Layton components of the game, which even includes the same coin collecting and 3-pronged hint system to help out anyone who gets stuck.  The Phoenix Wright segments however are given an overhaul from the normal games.  Each case now has multiple witnesses on the stand sharing the same testimony which introduces a new ‘reaction’ mechanic where you watch out for the body language of each witness in the event they react to a lie being told.  The court cases also have the hint system which I found to be a welcome addition to the game.  In the odd instance where I’d get stuck, it was much quicker to simply use a hint coin to get me back on track as opposed to fishing out a walk through online.

Considering my high hopes for this game, Professor Layton Vs Phoenix Wright is without a doubt a disappointing final product.  The game is clearly made with good intentions by Level-5 who have faithfully captured the game mechanics of the two popular franchises and have done an excellent job with the production values of the game which include voice acting and high quality animated cut scenes.  Where the game falls down is in its dreary overarching narrative.  The witch trial story ends up becoming incredibly convoluted, is too dark for this type of project and ends with a final twist that is directly inspired by M Night Shyamalan’s risible mystery film The Village.  Overall, the game feels like it is less than the sum of its parts.  I like Layton.  I love Phoenix.  Yet I had less fun playing this game than any of the individual Phoenix Wright or Professor Layton games.  It has fleeting moments of fun and inventiveness but there’s no shaking the fact that the overall product is a bit of a stinker.

Summary : It mixes the characters and gameplay mechanics of both Phoenix Wright and Professor Layton games but the end result is a disappointment thanks to its daft and unsatisfying story.

Previous: The Knick – Season One – “Method and Madness”
Next: Youtube Friday: Robin and Zelda Williams 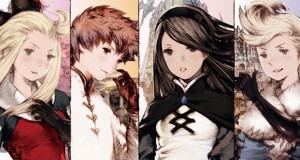 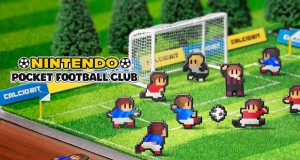