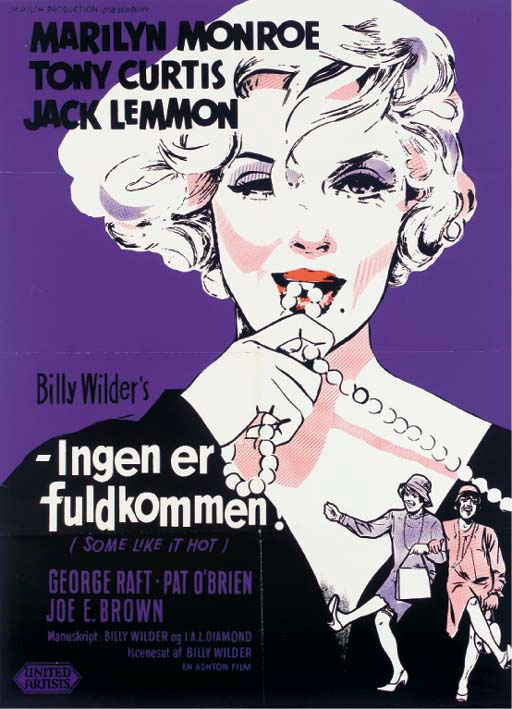 
It’s 1929 in Chicago and the prohibition is in full effect.  Joe and Jerry are two musicians for hire who bounce around from agency to agency in the Windy City, trying to find work.  Joe (Tony Curtis) is a gambler, a drinker and a womanizer.  Jerry (Jack Lemmon) is straight laced and constantly exasperated by Joe’s ill-advised schemes but he invariably gets roped in, despite his protests.  The pair of them walk into a garage and accidentally witness the St Valentines Day Massacre, a mob execution lead by the gangster Spats Colombo, who kills Toothpick Charlie in retribution for ratting out the location of his speak easy bar to the police.

In a panic, Joe and Jerry race out of town by taking a job with the all-singing, all-dancing female jazz troupe Sweet Sue and the Society Syncopators who are headed for Florida.  To hide from the mob, they dress in drag.  Joe becomes Josephine and Jerry becomes Daphne.  The plan seemingly goes well until they meet Sugar (Marilyn Munroe), the troupe’s beautiful vocalist and ukelele player.  Joe and Jerry both fall in love with Sugar and struggle to remember that they cannot make a pass at her and must remain in disguise, lest a member of the mob spots them. 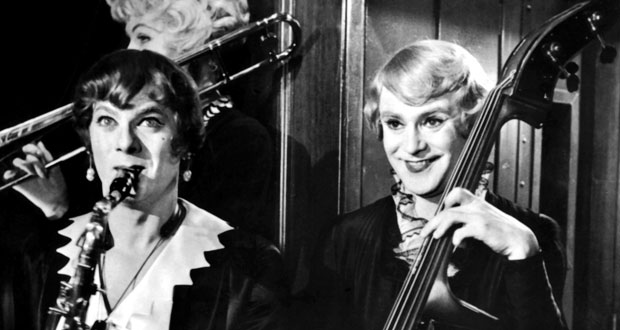 Thats more or less the set up for Billy Wilder’s Some Like It Hot.  The film is a classic screwball caper comedy that is loaded with innuendo laden one liners and physical comedy.  It is without a doubt Marilyn Munroe’s most beloved and popular role and that is all the more remarkable when you learn that this film was shot at the height of her anxiety and personal problems.  She was famously difficult to work with on set and there are lines the film (“where’s the bourbon?”) that reportedly took up to eighty takes.  That the chemistry and commradery between the three leads feels so genuine is a credit to Curtis and Lemmon who would have endured an unusually repetitive, workman like approach to any scene involving Munroe.

Some Like It Hot often turns up in the Greatest Movie lists as one of the greatest comedies ever made and it’s easy to see why.  The film has a terrific script and is spoiled for talent, with not just three terrific lead actors but an amazing supporting cast of characters – Sweet Sue, Osgood Fielding III and Beinstock – who are all memorably silly and endearing.  Unlike a lot of contemporary comedies which have a disposable quality to them, Some Like It Hot is a film that does everything as well as it can – the action scenes, the physical comedy, the romance and the musical numbers – are all as polished and accomplished as you would expect in their respective genres.

That said, Marilyn Munroe, is of course the star attraction.  As ever, she plays a sexy, sultry and naive waif who commands the attention of every man in the room and appears to have them wrapped around her finger without even knowing it.  Some Like It Hot is loaded with memorable lines and it is Curtis that says it best when he first lays eyes on Munroe –“Will you look at that! Look how she moves! It’s like Jell-O on springs. Must have some sort of built-in motor or something. I tell you, it’s a whole different sex!”  When you see the low cut evening gown she wears, you’ll be inclined to agree.

Some Like It Hot is arguably Marilyn Munroe’s sexiest performance on screen and its surprising then when you realize she has largely accomplished this without flaunting her famously curvy figure for most of the film.  Munroe was pregnant during the shooting of the film so Wilder had her either wrapped up in a coat or shot from the waist up in most of the scenes.

As screwball comedies go, Some Like It Hot has aged exceptionally well.  There’s a number of comedic devices at play in the film which are timeless in their appeal.  I love the contrivance that leads to Tony Curtis playing not one but two different characters – Josephine the sax player and Junior the oil tycoon – and the ridiculous energy he has to expend running between locations and changing outfits to maintain the facade to Sugar.  There’s some classic physical comedy routines such as the ol’ cat and mouse chase in a hallway with many doors.  Almost all of the characters are functioning alcoholics.  There are running gags  (blood type O is a recurring line) and Sugar seems to unwittingly speak in nothing but sexual innuendos (“I always get the fuzzy end of the lollypop!”). 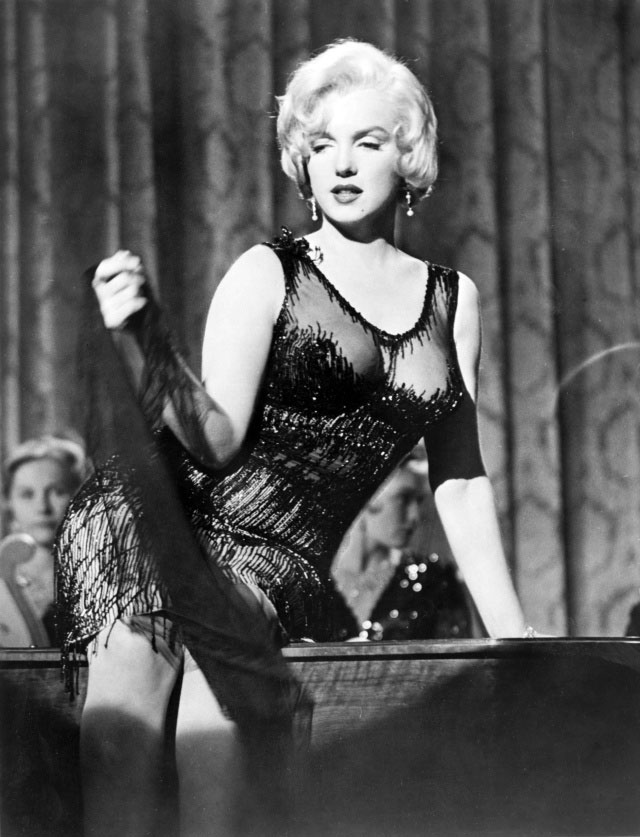 There is a dual narrative that develops when Joe courts Sugar and at the same time, Jerry begins to receive unwanted attention from the lonely old millionaire Oswald.  You might think the payoff is the sight gag with Jack Lemmon doing the tango with the old codger but there’s more than that.  The film ends with one of the best last lines I can recall and if you haven’t seen it, then I won’t spoil it.

Some Like It Hot is one of those films where everything comes together perfectly.  It is timelessly funny.  Despite its difficult journey to the screen, the final product is an impressive sight to behold.  I read about Munroe’s eccentric behavior and how she alienated her colleagues before I saw the film.  Tony Curtis famously referred to kissing Munroe as like kissing Hitler.  But none of it is apparent onscreen.  When Curtis and Lemmon go googly eyed over Sugar, it’s believable and hilarious.  When Munroe takes the stage and sings I Wanna Be Loved By You, she absolutely slays it.

Some Like It Hot is a film far ahead of its time.  It is effortlessly and confidently mixes sharp-tongued satire with gender-bending gags about cross dressing in a way that is funny, knowing and never mean spirited.  A comedy that deserves all the plaudits and praise that it gets.