For reasons that I assume are tied to a marketing department somewhere, the A-League is very fond of having themed rounds during the regular season.  There’s the ‘rivalry round’ where all the interstate derby matches are played at the same time.  This season had the ‘Summer of Football’ round where fifteen matches were played in seventeen days.  One year they lined up one fixture right after the other so that there was eight consecutive hours of matches.

In Round 18 of the current season, a decision was made to play every fixture in New South Wales.  If you know your Australian geography, you’d see that there are only four teams out of ten hailing from NSW (Sydney FC, Central Coast, Newcastle and Western Sydney).  That meant that Melbourne Heart vs Perth Glory was played in a neutral rural venue to fit the format of the theme.  It was all a bit strange.

Needless to say, perhaps NSW is in the need for a bit of footballing TLC because not a single team from the state was able to win their fixture.

Brisbane Roar traveled to Western Sydney in a top of the table clash.  Shockingly, I didn’t plan my weekend properly and actually booked a dinner with friends over the top of the game so I only saw the first half.  Apparently the Wanderers dominated for large periods of the game but they had to share the honours.  A late goal from Haliti gave the Wanderers a point for their efforts, cancelling out a first half strike from evergreen Besart Berisha.

It’s only the Roar’s second draw this season and puts them in incredibly good stead to win the Premieres Plate.  There’s ten rounds to go and they have a seven point cushion at the top of the table.  Better still, none of the teams currently sitting second through fourth have been able to find any consistency in their form to mount a challenge.  The season isn’t over yet but it’ll take an almighty surge from the Wanderers or the Victory at this point to catch the Queenslanders. 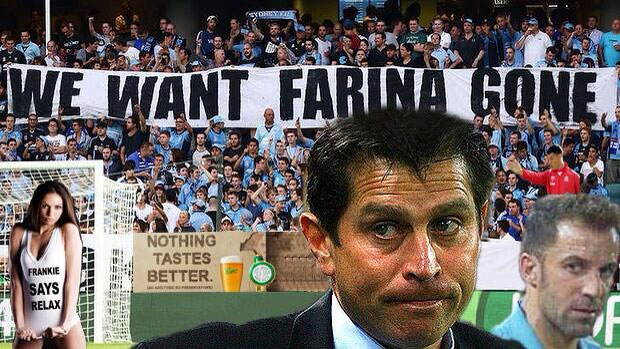 Sydney FC are a club in trouble.  Not just sack your current coach and start again sort of trouble.  By all rights, they should be the second biggest (and best) team in the competition but they have been disastrously poor for three consecutive seasons and tensions boiled over at Allianz Stadium on the weekend when their diehard fanbase, the Cove, turned up with a banner demanding the sacking of manager Frank Farina and board members Tony Pignata and Scott Barlow (son-in-law of the club owner David Traktovenko).

After the stadium security forcible ejected the Cove’s leader and his wife, the fans staged a mass walkout and held an impromptu demonstration outside the stadium.  Meanwhile Sydney FC put in a limp performance, losing 3-0 to Adelaide United, their third home defeat in a row.  At some point during the game, a fan pegged a beer at Frank Farina.  After the game, Sydney FC player Nick Carle showed open dissent against Frank Farina, stating he was unhappy with the position he was being played in.

What a mess.  The bigger picture is that Sydney FC, one of the biggest clubs in the competition, appear to be completely aimless, devoid of leadership and have a totally sour relationship with their most devoted fans.  This is a club where season after season, inexplicably poor recruiting decisions are made.  Some of the worst players in the competition such as Fabio and Matt Jurman have had stints at the club.  They passed on Central Coast Mariners and Socceroos prospect Bernie Ibini.  They had an opportunity to sign Western Sydney Wanderers manager Tony Popovic but opted to go with Farina.  It seems to a club where people in positions of power look after their own and the success of the club and the relationship with the fans seems to come in second.

The fans are probably right to ask for change but it almost seems an impossible prospect.  You can demand the removal of Scott Barlow all you want but if he’s married to the owner’s daughter, what happens if they decide to walk away from the club entirely?

It’s a debacle with no easy answers.