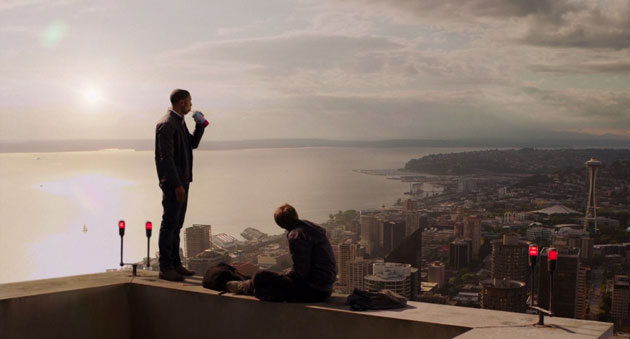 Just quietly, it’s been an excellent few years for science fiction films.  Whether you like big budget spectacles like Avatar, Star Trek, Tron Legacy and Inception or prefer something a little more low key like Moon, Source Code and Monsters, science fiction fans have been well served over these last few years with a variety of creative and well made films.  Chronicle is another to add to the list.  It’s a solid Western remake of the classic Japanese anime Akira.

Chronicle tells the story of three teenagers whose lives change forever when they meet at a rave.  They are Andrew, Matt and Steve – three boys who occupy three distinct rungs on the social ladder at their high school.  Andrew is a friendless loner who is socially awkward, gets bullied and has a tough home life living with an alcoholic father and a terminally ill mother.  His cousin Matt is firmly entrenched in high school annonimity.  He’s got a few friends, the occasional girlfriend and gets by as one of the crowd.  Then there’s Steve, the star quarterback who is running for class president.  Everyone loves Steve.

Despite his social standing, Steve has no problem befriending Andrew and Matt outside the rave.  He asks them to come with him into the woods as he’s made an interesting discovery and he wants to use Andrew’s video camera to document it.  The trio head out and find a perfectly symmetrical hole in the forest that drops down into a giant underground cavern.  Andrew, Matt and Steve venture inside where they find a giant glowing crystalline structure that appears to react to their prescense and bestow upon them the power of telekenisis.

I’ve heard Chronicle described as a ‘costume-less super hero film’.  Unlike a conventional super hero film however, there isn’t really a villain so instead, we get an entire second act devoted to showing how the boys learn to use their new powers and how they gradually come to bond as friends.  Matt rather eloquently describes their newfound telekinetic powers as like a muscle.  With consistent practise, they improve their accuracy and strength, starting from moving lego bricks to eventually, moving cars.  For Andrew, although he is the most adept at using his power, the bigger change in his life is making two friends.  After a day out in which the trio learn how to fly and end up playing football amongst the clouds, he earnestly tells Matt and Steve afterwards that it was the best day of his life.

Throughout the film, there is an undercurrent of unease and tension and it comes from Andrew.  So long has he been powerless and lacked the agency to do anything about his tormentors that he carries within him a simmering temper that threatens to boil over.  Steve misjudges Andrew’s immaturity and lack of social skills and tries to make him one of the popular kids in school overnight.  Steve encourages Andrew to use his powers to win a school talent show and to try and have a one night stand with a girl at a party which leads to disasterous consequences.  For despite Andrew’s ever-changing physical powers, he is still the same socially awkward kid at heart.

Chronicle reaches a tipping point in the third act which I’ll not spoil.  The end point of the film is pretty clear but it takes a rather spectacular route to get there.  This is a great little film and its made even more remarkable when you consider all three lead actors are first timers and that this also the screenwriting and directorial debut of Josh Trank and Max Landis also.

The beauty of the film is that powers are just a means to an end.  It’s not really a super hero film at all.  There are no heroes.  Andrew is a disturbed young man who has a miserable life and it isn’t made any better by being bestowed a sudden physical gift, no matter how extraordinary.  As Peter Parker’s uncle put it so succinctly fifty years ago – “with great power comes great responsibility.”