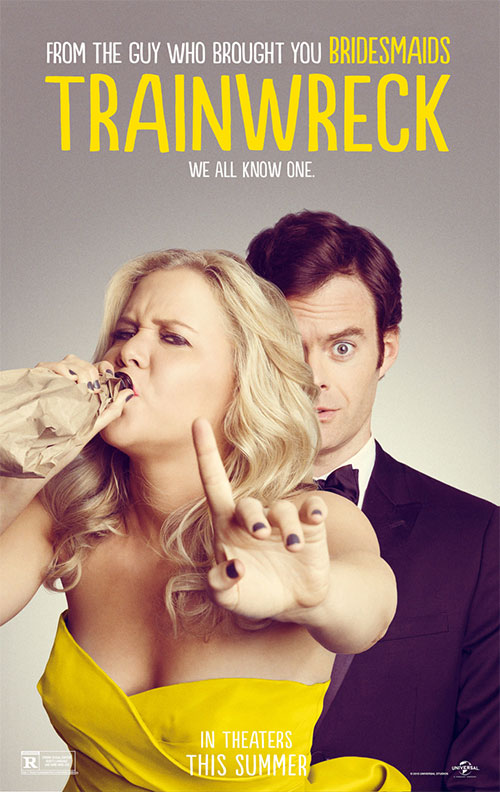 Once a heavyweight fixture at the box office of the Nineties and early 2000s that thrived on the star power of Julia Roberts, Meg Ryan, Drew Barrymore and Hugh Grant, the market for romantic comedies seemed to bottom out about five years ago when a torch was supposed to be passed to a new generation of Hollywood darlings – think Matthew McConaughey, Katherine Heigl et al – but audiences didn’t quite take.

There’s a whole grab bag of reasons as to why this happened.  One of the most plain observations to make is that most rom-coms in the modern era aren’t very good.  Over and above that, the other problem was that there was a shift in the cultural landscape in how people would date.  The ‘meetcute’ – a term coined by the late great Roger Ebert – which describes the way two lovers first meet in a romcom, began to feel pretty out of step with the realities of modern dating.

Lastly, and what Trainwreck sells its story on, third wave feminism has influenced the cultural Zeitgeist in Western society to a point where women can finally play the role that have been the sole domain of men for many years – an unapologetically sexual being who has no desire to settle down or have children. 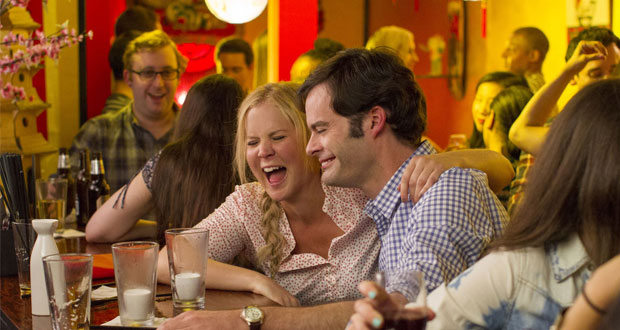 Amy Schumer, an actor whose star is on the rise thanks to her stand up work and her tv show, wrote and stars in Trainwreck.  The film begins with Amy’s father Gordon explaining to his two young daughters why their mother has left him.  Using a hilariously inappropriate analogy involving dolls, Gordon drives home his relationship mantra to his children – “monogamy doesn’t work”.

The message doesn’t quite take for Amy’s sister Kim who meets Mr Right (Tom), marries and lives a domestic life that involves a stepson from Tom’s previous marriage.  Kim’s sedentary lifestyle is like kryptonite for Amy whose professional career flourishes writing for a scummy Men’s Magazine.  Amy enjoys a large, disposable income and she has an active, commitment free sex life that sometimes involves pro-wrestler John Cena and sometimes not.

It goes without saying that Schumer is absolutely hilarious and note-perfect in this role.  She has made waves with her own comedy vehicle Inside Amy Schumer and the ethos behind the Amy character reminds me of the infamous sketch from her show that satirizes 12 Angry Men where a jury of befuddled and stodgy old men debate Schumer’s ‘fuckability’.  What makes the start of Trainwreck feel like a breath of fresh air is the gender switch on a time honoured rom-com trope as a montage shows Schumer kicking out a procession of confused, clingy and smitten men.

Another highlight of the film’s opening act is – trust me on this – John Cena.  The pro wrestler apparently ad libbed most of his lines and if thats true, he may well follow in the footsteps of Duane Johnson and have a film career ahead of him.  Cena plays the part of gym-obsessed, closet homosexual who wants to settle down and marry Amy but curiously tells her mid-coitus that he admires her masculine posterior.  His part in the film is brief but memorable.

Amy’s love life is turned upside down when she is given an assignment to write about a sports doctor and she meets Aaron (Bill Hader).  At first, she treats him like any other man in her life.  She goes home with him one night and then gets out of dodge soon after.  But Amy is alarmed and confused when Aaron calls her the next day.  She’s even more flummoxed by the revelation that she’s not so adverse to the idea of seeing him again.

You know where the story goes from here.  It’s a well travelled road but Trainwreck remains buoyant thanks its to entertaining script, Schumer’s strong lead performance and a likeable cast of cameos.  Some less charitable critics have attacked the film for its conventional end goal which could be seen as ‘chickening out’ from who Amy is to begin with.  I think that’s probably a little harsh.  The film stops short of punishing or sneering at Amy’s promiscuity.  She simply finds someone she would like to settle down with.

Tonally, the film is a bit all over the place.  I put this down to the collaboration of Amy Schumer and director Judd Apatow not quite gelling as cohesively as you might like.  There is a rather sombre sub-plot involving Amy’s father that pushes the film past the two hour mark and grounds the film’s overall breeziness, only for an improbable finale involving cheerleaders to suddenly unfold that feels like pure Nineties romcom fare.  It’s certainly nothing that spoils an otherwise excellent film though.

So is Trainwreck the film to launch Amy Schumer into super stardom and spark a renaissance of romcoms?  It’s probably too early to tell.  But I have a hunch that if or when the genre returns to prominence, many future films will be shaped and influenced by what Schumer has done here.  With Trainwreck, she is modernizing a very tired and conventional film genre, dragging it kicking and screaming into the 21st Century.

Amy is a commitment-phobic career woman whose life is turned upside down she meets a sports doctor who might be Mr Right.

Summary : An entertaining and unconventional romcom that is a perfect star vehicle for Amy Schumer. 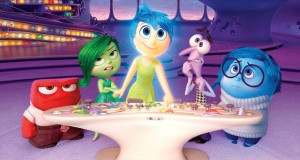