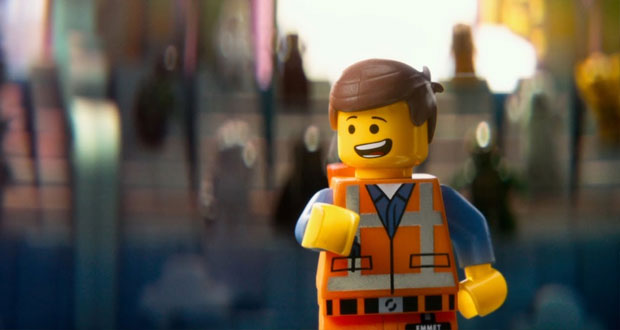 
Meet Emmett Brickowski.  Emmett is your average, blue collar minifig who lives in the Lego town of Bricksburg.

Bricksburg is ruled over by Lord Business, the evil CEO of the Octan Corporation, who controls the populace in a benevolent dictatorship.  People are kept under rule by being fed a steady diet of mindless commercial pop music and brain dead TV shows like Where Are My Pants?  The townsfolk of Bricksburg are presumably kept in a state of perpetual serfdom too as the poor minifigs have to pay up to $40 for a coffee.

Emmett is completely oblivious and happy with his bland and unimportant life when one fateful day he unintentionally discovers the Piece of the Resistance and is anointed as The Special, a chose one who can deliver freedom and liberty to the citizens of his town.

Emmett enters into a clandestine liberation army that includes the wise all-knowing Vitruvius (voiced by Morgan Freeman, naturally), the spunky and vivacious Wyldstyle, Batman, one of those old Spacemen Lego guys from the Eighties and a half cat, half unicorn creature named Unikitty.  Together they fight the evil forces of Lord Business and attempt to thwart his plan to permanently encase Bricksburg in a state of order where no imagination or creativity is allowed (using a tube of superglue).

By all rights, The Lego Movie, a film about the popular plastic toys from Denmark, should fall somewhere between Battleship and G.I Joe in terms of quality.  After all, the concept is to make a 90 minute commercial pitched at selling more toys.  Right?

Wrong.  The Lego Movie turns out to be an improbably decent animated comedy.  It has a great voice acting cast, is funny throughout and most unexpectedly, it is a surprisingly sharp tongued satire that is not afraid of lampooning consumerism and even the Lego company itself.  When you look at how many licensed product ranges The Lego Group releases each year (Batman, Superman, Spider-man, The Lone Ranger, The Simpsons, Teenage Mutant Ninja Turtles, Star Wars etc.), the organization’s approach to order and segmentation seems pretty consistent with Lord Business himself.  The resistant movement lead by Emmett on the other hand, seems to embody the spirit of The Lego Group from the Eighties.  The one that made the What It Is Is Beautiful advert and embraces creativity. 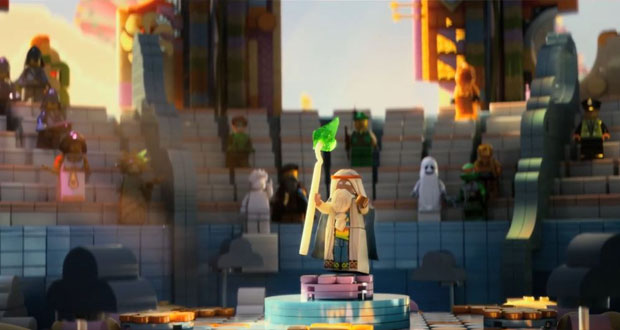 Clocking in a perfectly lean ninety minutes, The Lego Movie is funny, fast paced and stuff to the gills with Easter Eggs, cameos and in-jokes that will delight both Lego fans and film buffs.  I’m sure anyone who saw the trailer would have been expecting the little nods to classic Lego product ranges from the past (Pirates, Space, Fabuland etc) but I doubt you would have expected all riffs and homages to classic films that turn up.  I know I certainly didn’t expect to see a Felini reference in The Lego Movie of all things.

The Lego Movie also looks absolutely amazing.  It is entire computer generated and yet it has the look and feel of real Lego bricks.  Everything in the world is convincingly tactile, the bricks marked with scratches, dust and show signs of wear and tear.  The astronaut minifig Benny has a helmet which is snapped at the bottom and any child of the Eighties will instantly relate to that little detail because that’s exactly what would have happened to their toy too.  I think the greatest credit I can pay to the visual effects team is that a lot of people I have spoken to presume most of the film to be stop motion animation.  Many are simply unaware that they are looking at something that is wholly computer generated graphics, such is the quality.

There is a twist in the final third of the film which I won’t spoil but I found it to be a clever and bold direction for The Lego Movie to take.  It’s the sort of gambit that can potentially fall flat on its face, depending on the audiences’ willingness to suspend disbelief but I thought it paid off and judging by the audience I watched the film with, I believe most other people will get on board too.

The Lego Movie is a strange and scrappy film that has a great sense of humour and delivers on many levels.  It’s a great kids film.  It’s a great animated film.  It’s a great comedy.  Most importantly, it does the license justice and has a high spirited energy to it that reminds me of the best all ages films like The Princess Bride and Who Framed Roger Rabbit?  Time will tell whether this film is looked back on as fondly as those classics but I genuinely believe its in the same league.

Summary : A hilarious animated film that is funny on face value but also has some interesting themes and creative references that reward repeat viewing. Everything is indeed awesome. 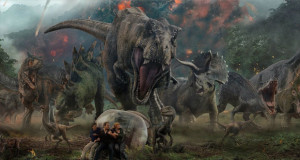