Traditionally, Wrestlemania has been the show that concludes the major story lines of the past twelve months with the crowning of a champion that is expected to lead the company for the year ahead.  Most of the monthly PPV shows tend to be booked in a more ad-hoc fashion but because of the high profile nature of Wrestlemania, plans are generally confirmed a full four to six months in advance and The Road To Wrestlemania storyline begins at the Royal Rumble show in January.

For wrestling fans, the unanimous choice for breakout star of the last 24 months has been Daniel Bryan.  Bryan is a diminutive, bearded vegan who stands at just 5″10 who was an accomplished wrestler on the independent circuit before joining the WWE five years ago.  He carries a strong wrestling pedigree (he was trained by Shawn Michaels and William Regal) but his small stature and unconventional appearance made his chances of success in WWE seem limited.  He famously lost his first ten matches in a row and was even briefly fired from the company in 2010 when a sponsor objected to Bryan choking a ring announcer with a tie.

Through a combination of charisma and an appealing wrestling style that is easy to cheer for, Daniel Bryan has connected with fans in a way that few others ever do in their careers.  Oddly enough, his trajectory into super stardom was ignited at Wrestlemania two years ago when he lost a match in 18 seconds.  So infuriated was the audience that they chanted his name throughout the next three matches.  Then they chanted again the next night.  They haven’t stopped since.  The question is, would the company listen? 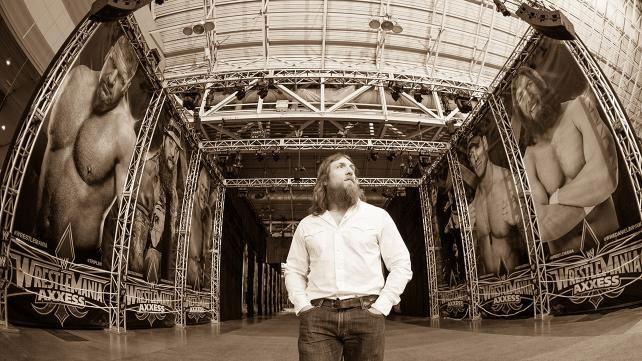 The short answer, was no.  Although Daniel Bryan would win the WWE Championship at the Summerslam show of 2013, his reign would last less than five minutes as he would be cheated by longtime wrestling heel Triple H and pinned by Randy Orton.  At the Royal Rumble pay-per-view in January, fans eagerly anticipated Bryan’s Road To Wrestlemania storyline kicking into gear so he could reclaim the title and gain a measure of revenge against Orton and Triple H.  He was scheduled to fight newcomer Bray Wyatt earlier in the evening and then fans anticipated he would be entering the Royal Rumble match itself, where the winner is granted a title shot at Wrestlemania.

Bryan had a hard fought competitive match against Bray Wyatt before unexpectedly losing.  Then, when the Royal Rumble match took place, it slowly began to dawn on the fans in attendance that Bryan would not be involved.  Instead, the winner was Batista, a former main eventer from five years ago who retired from wrestling but decided to return because he wanted to promote his new Marvel superhero film, Guardians of the Galaxy.  He was booked as a heroic babyface returning to resume his rivalry with Randy Orton.

The fans wholeheartedly rejected this direction and booed both men mercilessly.  They chanted “bullshit”, “boring” and they chanted for Daniel Bryan.  Neither Randy Orton nor Batista really knew how to handle it and a for a series of shows, they stood in the ring miserably absorbing jeers from the fans.  Another main event wrestler, CM Punk, frustrated with the creative direction of the company, quit unexpectedly the week after the Royal Rumble.

It was a puzzling and asinine move by the WWE kingmakers (Vince McMahon, Stephanie McMahon and Triple H) to try and ignore the popularity of Daniel Bryan.  When you consider his star power and feud with Triple H was the high profile event of last year, it was a fool-hardy endeavour to try and shift the focus to Randy Orton and Batista, two performers who peaked in popularity nearly seven years ago.  It was the equivalent of watching the rise in popularity of Steven Austin and The Rock in the mid Nineties and then deciding to have Lex Luger main event your next Wrestlemania.

Just four weeks out from Wrestlemania XXX, the company finally relented and booked a match between Daniel Bryan and Triple H.  The match serves as an opportunity for Daniel Bryan to get his revenge on Triple H and the winner of the match is expected to win the main event against Randy Orton and Batista.  Given the company’s stubborn refusal to get behind Bryan, there is still a possibility that one of the heels (Orton, Batista, Triple H) will walk out of the match as champion.  If that happens, the show will almost certainly become a memorable one for how the crowd responds.

The strange and unexpected events leading into this years Wrestlemania reflect a strange trend that has developed at each decade anniversary of the show.  At Wrestlemania X, the company had tried to get behind the musclebound Lex Luger as a replacement for Hulk Hogan whose star power was on the wane.  When the fans failed to take to Luger, Vince McMahon turned to the smaller, technically accomplished wrestler Bret Hart who ended up winning the title that night.

Ten years later, Vince McMahon heavily promoted Brock Lesnar, another huge musclebound performer, as a replacement for The Rock and Steve Austin who were leaving the business.  Although the fans were receptive to Brock, he didn’t enjoy the career of pro wrestler and unexpectedly walked away from a long term contract.  Vince then turned to the smaller, technically accomplished wrestlers Chris Benoit and Eddie Guerrero who both ended up winning World Titles that night.

And now here we are, ten years on, and once again, the fans haven’t taken to the musclebound giant Batista and if history repeats itself, Vince McMahon looks like he will be turning to the smaller, technically accomplished wrestler named Daniel Bryan to save the day.

If the original idea of having Randy Orton vs Batista had gone ahead, this match would have been a spectacular train wreck.  Say what you will about Orton who has been booked as a paper champion and afterthought since December but Batista doesn’t even seem to be match fit.  He looked exhausted in his match against Alberto Del Rio in February and that ran for seven minutes.  Naturally, the addition of Daniel Bryan should make this a completely different proposition and I expect Bryan and Orton to do most of the workload in this match with Batista contributing with a couple of power moves.

If the WWE don’t completely screw this up, this match should finish with Daniel Bryan finally getting his big Wrestlemania moment and closing out the show with 70,000 fans pointing their fingers into the air shouting ‘YES!  YES!  YES!’

This match probably wouldn’t have happened unless CM Punk walked away from the company and yet here we are – a headlining Wrestlemania match up between Daniel Bryan and Triple H.  Who would’ve thought we’d see this match five years ago?

Looking at the last four weeks of RAW where Triple H and Stephanie have gotten nuclear heat from the fans in their feud with Bryan, they look to be having the time of their lives.  And to that end, Triple H should know that the only way this finishes is with him staring at the lights and Bryan getting the three count.  I believe that will happen and I also expect we should get a pretty decent match from these two.  Triple H rates himself as an accomplished wrestler and he knows full well that Bryan carries the reputation of being the best wrestler in the WWE today.  I hope these two get at least twenty minutes.  Although the main event will (or should) have the spectacle of Bryan winning the gold, I expect this to be a much better quality match.

The Undertaker vs Brock Lesnar

Will The Undertaker be capable of delivering his fifth consecutive show-stealing five star match?  The build up to this match up has been pretty poor and everyone knows that The Undertaker will win but I’m hoping that the low expectations and greater focus on Daniel Bryan will mean that these two can surprise everyone with a great match.  Lesnar was absolutely amazing in his last match against CM Punk at Summerslam and I don’t see why we can’t have another classic on our hands.  Both wrestlers utilize a lot of MMA moves in their arsenal and so I expect a lot of interesting submission moves, choke holds and counters.

Bray Wyatt is one of the more exciting long term prospects that the WWE has going for it.  He has a unique look and wrestling style, a terrific entrance and a great presence about him.  Honestly, in all the wrestling characters that have come and gone in the last thirty years, I can’t think of anyone else like him.  It’s excellent to see he’s landed such a high profile opponent for Wrestlemania XXX and although some fans are nervous that Cena will absolutely steamroll the guy, I’m not so concerned.  Better still, Bray Wyatt’s mystique isn’t centered around an unbeaten streak so I don’t think he’ll even be set back too much if Cena gets the win.  As long as Wyatt has a competitive match and gets to hit his signature spots, I don’t see why he won’t be a main event fixture in six months time.  I also wouldn’t mind seeing this feud continue through to Extreme Rules.

Who Should Win:  Bray Wyatt
Who Will Win:  John Cena

The Shield vs Kane and The New Age Outlaws

They should make short work of these scrubs though.  The only way Triple H’s Friends get the win here is if its to pull the trigger on The Shield finally going their separate ways.

I’m a sucker for Battle Royals and I like wrestling trophies too.  I believe this is the first trophy we’ve had since Bad News Brown won a Battle Royal at Wrestlemania IV.  Hopefully the three unannounced wrestlers will be some entertaining former stars.  As for the inaugural winner, the Big Show seems like a natural choice.

Who Should Win:  The Big Show
Who Will Win:  One of the unannounced competitors

I don’t even understand how this works.  14 people in the ring at once and its a one-fall match?  If one person is trying to pin the other, why wouldn’t the other 12 people interject?  This match sounds terrible.

AJ Lee has been a worthy champion and I don’t see a particular need to take the title off her at this stage.

Who Should Win:  AJ Lee
Who Will Win:  Funkadactyl #2

Like the Divas Gauntlet match, this one feels unnecessarily crammed.  The Usos have had some great matches in the last twelve months and I think a regular tag team match up against The Real Americans would’ve been preferable.  The breakout star amongst this group of nine is of course Antonio Cesaro.  His signature spot – the giant swing – will be the key spot in this match and its a sure thing that he will hit that move on the pint-sized El Torito.

Hopefully this match is mostly used as a vehicle to showcase Cesaro and we get to see some highflying moves from the Usos and Los Matadores.  That’s all I ask.

Who Should Win:  The Real Americans
Who Will Win:  The Usos

Previous: The Lego Movie
Next: The Ten Greatest Wrestlemania Matches