Sheilas, Wogs and Poofters by Andy Harper and Josh Whittington 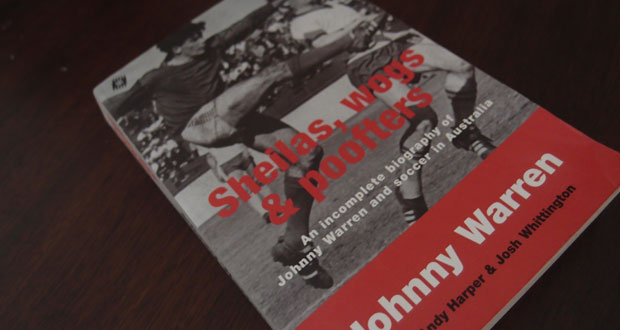 “Throughout my life, football has come to mean so much to me.”

Sheilas, Wogs & Poofters is lovingly written biography that covers the life and times of Australian footballer Johnny Warren and along with it, offers a look at the history of the sport in Australia – its ups and downs with the Australian sporting public and its troubled relationship with the media.  It is written in first person, as though autobiographical, but the majority of the writing has been put together by Andy Harper and Josh Whittington.

The title of the book sets the tone for how football was perceived in Australia in the Fifties.  It was that foreign game played mostly by immigrants and kids who couldn’t cut it in Aussie Rules or League.  Warren describes those early years of his playing career and oddly enough, its like football in Australia underwent the opposite trajectory to how the game developed in England.  In the English leagues, each team was largely filled with local, English speaking players with only a handful of imports from overseas.  Nowadays, its not uncommon for the top Premiere league teams to field a squad where the majority of players are from overseas.  In Australia, the current laws around the A-League prohibit any more than five foreign-born players in a single squad.  But for football leagues in post-war Australia, they were flooded with talented Europeans who had fled their country and migrated to Australia.

As a result, Warren explains that as a 19 year old footballer, it was not uncommon for him to be playing alongside Czechs, Hungarians, Greeks and Cyprians.  He was given the captaincy at an early age almost as a matter of practicality.  Clubs needed an Anglicized, English speaking Caucasian to be the face of the team!

Professional sport as we know it today didn’t really exist in any sporting code in the Sixties and so it was with football in Australia.  It’s fascinating to read about athletes who represent their country on the international stage, whilst having to juggle a full time job and make the best of getting paid $5 per game.  It’s also eye-opening to see how quaint and woefully inadequate the preparations for the Australian national squad were in the lead up to World Cups in the past.  When Warren describes one failed campaign in the Sixties, the national squad traveled to Darwin to play a makeshift amateur side for a single game before their qualifier against North Korea.  Of course, these days predated the Internet or any kind of scouting in Australian football so you can imagine the surprise that Warren describes when they went from playing in front of a couple of thousand supporters in Australian club matches to playing against North Korean in front of 60,000 fans.

Sheilas, Wogs & Poofters is a great read and a wonderful insight into just how much football in Australia during the Sixties and Seventies was like the Wild West compared to the safe, organized professionalism of the modern game.  Warren describes playing games with the Socceroos in South Vietnam during the war where angry local fans threw explosives (!) at the players and invaded the pitch when their team were beaten.  The prize for the Socceroos if they won a four-team competition in South Vietnam seems absurdly quaint by today’s standards – the players were allowed to keep their tracksuits.

Even in Australia the game seemed out of control and chaotic at the best of times.  Warren describes how he successfully organized an exhibition game between the Socceroos and the New York Cosmos in Sydney.  The Cosmos at the time, had footballing legend Pele as their striker.  As a promoter, Warren said he had no idea how to anticipate how many people would turn up to the game.  He just booked a stadium that he felt was an appropriate size and hoped for the best.

On the night, 80,000 people turned up to see a game held at a 42,000 seat stadium and the ticket vendors were so overwhelmed by the crowds that people just poured into the stadium and sat where ever they could find a seat, leaving many legitimate ticket holders out of the venue.  By the sounds of things, they were extremely fortunate that no one got seriously injured.

If the team themselves and some of the environments they played in sounded kind of strange, I have to admit, Johnny Warren himself seems a bit odd at times.  He describes, in a completely straight-faced fashion, how he went through a phase of self-hypnosis before big matches.  In the chapter where he describes the notorious ‘curse’ placed on the Socceroos by an African witch doctor, he seems to refer to the curse as a statement of fact.  Warren certainly wasn’t a man to shy away from superstition and unconventional spiritual beliefs it seems.

When you read about Warren’s career after he retired, from his coaching days to his involvement in the media, promoting football in Australia to an unco-operative and disinterested Australian media, you have to admire the man’s passion and tenacity.  His love and dedication to football in Australia was clearly a big part of the foundations that have brought the game to where it is today.

The book doesn’t really make this point but I felt that Sheilas, Wogs & Poofters ends as a bittersweet and cautionary tale about smoking.  Johnny Warren famously championed the day that football would become popular in Australia and that the national team could become competitive against the rest of the world.  “I told you so” was his catch cry.  Warren, a life long smoker, contracted lung cancer at the age of 61 and passed away in 2004.  He didn’t live to see the success of the A-League nor the Socceroos incredible World Cup performance in 2006.  For a man who was a such a dedicated servant to the game, it seems a crying shame.

For anyone who has even a passing interest in football in Australia, this is an essential read.  The book is an invaluable history lesson on the rise of the sport in Australia, its troubled administration during the NSL days and how thanks to the efforts of ambassadors like Les Murray and Frank Lowy, the sport has risen to a stage where it can now credibly rival the other sporting codes in popularity and quality.